Dirk Veulemans was born in Oostende on 3 April 1956. From a young age he became interested in sounds and music. At 16 he bought his first guitar, experimenting on it with, for instance, loose strings. He also experimented with microphones and tape recorders. Veulemans feels that the few years he spent at music school contributed little to his musical ideas. He has taken part in workshops for traditional music and instrument building, and has performed with a number of folk groups in Belgium, the Netherlands, Germany, France and Italy.

Around 1986, Veulemans discovered electro-acoustic music, in which he saw the perfect vehicle for his musical ideas. In 1987-88 he took the seminar in “Electronic music composition” with Joris de Laet at the Antwerp conservatory.

In 1988, Dirk Veulemans became a member of the SEMensemble (led by Joris de Laet). He is also an active member of the composers’ organisation BEFEM (Belgian Electro-acoustic Music Federation) and a founding member of KaG (Artworkers Society). The latter organisation is a group of artists that sets up projects around contemporary music, with a particular focus on multidisciplinary, social and theoretical aspects. Since 1999 he has worked together with the Spectra Ensemble, handling the group’s electronic component. He has collaborated on a number of concerts with IPEM and the Lucien Goethals Society. He has also worked for KRIKRI, a non-profit society that organises festivals for experimental and sound poetry.

Dirk Veulemans works from his own studio, which has an 8-track section for listening and a digital section for editing images and sound. This offers him prime conditions for creating his electronic compositions.

Dirk Veulemans is known as a composer of electro-acoustic music. His work consists mainly of tape compositions. One example of such a composition is Utopia. There was no hard and fast working method for this composition. In a purely intuitive, instinctive way he generated synthetic sounds with ZBase, software that he has developed himself, combined with a limited number of concrete sounds. This material was then cut and pasted to form a composition that deals with the increasingly advanced integration of technology into the human body.

Besides composing tape compositions, Veulemans also uses live electronics and computer graphics (e.g., 13 Goudwindes, Genese) in order to give his work an extra dimension. The weasel is living on the lofts now is a tape composition with added flute and live electronics. The theme takes as its starting point the weasel in its natural biotope, the countryside. After watching a documentary, Veulemans discovered that weasels are now also living in attics in the city. In this change of habitat, Veulemans sees a parallel with a shift in our living circumstances. The weasel is a symbol of the way people adapt to the environment of today’s cosmopolitan information and communications age. This is musically expressed through the use of sounds taken from television. This tape creates an environment in which the flute goes in search of a balance between its own modified sound and the sound of its surroundings. The tape starts together with the flute. The first 110 seconds of the tape consists of silence, so that the flute can start its solo while the tape is running. This is followed by a gradually intensifying dialogue between the flute and the tape, after which the work ends with a passage exclusively for tape. The sound of the flute is recorded by 2 contact microphones and 1 acoustic microphone. Together with the tape, the flute sounds are projected through 8 tracks. The sound-sources are set up in a circle in the concert space. Both the audience and the flutist are placed within this circle, with the exact placing left to the performers’ discretion. In addition, at certain moments the sound processor produces precisely determined effects with the sound. Veulemans aims for a finely-poised integration of the flute part into the tape sound. For the notation the composer uses a combination of a timeline for the tape and live electronics, notated above a staff for the flute part. With the aim of creating unusual sounds, Veulemans has developed his own notation. The mechanical sound of the keys on the flute is particularly important in this score. Other additional extra-musical indications are also included by the composer, such as: “hit the keys with unpredictable timing. Like the doors in the hall of an administrative building”. The volume of this composition is limited, so that the work can be easily listened to.

In other compositions Veulemans also uses themes with a sociological angle. Hommelage is a work composed for the 25th anniversary of SEMensemble. The title is derived from the Dutch word hommel. Etymologically, hommel refers both to a bumblebee and to a primitive form of the zither, a traditional instrument. Veulemans uses the hommel as a key to various aspects of his composition. He conjures up the countryside, where the bumblebee is found and where the hommel is still played. At the same time he points to a future when people will live like bees in swarms. The composer feels that in tomorrow’s society there will be little room for everyone’s individual needs. He is thus attempting to build a bridge between tradition and progress in this work. Other works with a similar theme include 12 12 12 and Anonymus.

In a number of works, Veulemans’ scientific background provides a basis for developing physical laws and mathematical principles into compositional methods. Examples of this process include Hypertetraëder and 12 12 12, in which he uses the Gauss Curve and 3 states of aggregation. The point of departure in the latter work is the Zuiderpershuis, a former industrial building in Antwerp. Using sound molecules, Veulemans forms a musical “gas” that changes into different states of aggregation through changes in density and volume. The work thus evolves musically from gas to liquid to solid. In compositional terms, he is here simulating the action of a press. The press is the last vestige of the 1833 industrial energy plant which the Zuiderpershuis housed. The building is now an art centre.

An essential element in his oeuvre consists of installations, including Passage, Genese and 8 Artists (as well as Zuiderpershuis, discussed above). These installations are often the result of commissions from cultural organisations, as are many of his other works. An installation is here a work that makes use of a space that the listener can choose to enter, either listening or not, sometimes even participating in the performance. Passage is a prime example of such a work. A motion sensor is placed in a long hallway and linked to a computer. The movement of the audience walking through the hallway generates the music and the computer images.

The concept of spatialisation is most clearly demonstrated in Batiment, a work composed for Lucien Goethals’ 75th birthday. Using a bat-detector, ultrasonic bat sounds were recorded. After manipulating and amplifying the sounds they were played on four channels directed to the four points of the compass from the Belfort bell-tower in Ghent.

Peace for a piano player may be seen as an exception in Veulemans’ oeuvre. This work was composed for a player piano or any other automated musical instrument (none is specified, but one created by Godfried-Willem Raes is a possibiity). This composition is the result of a process whereby notes are registered in the computer memory, and then re-formed into music by automated instruments. This is music that is almost unimaginable without automated instruments, and certainly unperformable.

A last category of works was the result of a collaboration with the Spectra Ensemble and KaG, in which works by other composers were re-interpreted. The most important projects in this area were Karlheinz Stockhausen’s Mantra and Kontakte and John Cage’s Songbooks Volume II and Where are we going and what are we doing? In Fontanamix, Cage’s original tape was cut into hundreds of fragments and transformed into a new composition according to Cage’s own prescriptions. These prescriptions also include instructions on how to apply several digital sound effects. In 2005, Veulemans again worked with KaG as a sound engineer and performer of electronic music in a performance of Maulwerke, a composition by Dieter Schnebel.

Other: Peace for a piano player: work for music automates (2003) 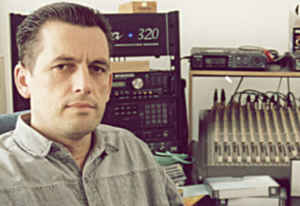