Serge Verstockt was born in 1957 in Braschaat. He was familiar from an early age with the artistic world as both his parents were visual artists. His father, Mark Verstockt, was known as a pioneer in a contemporary form of contructivism. Serge Verstockt was quickly drawn to artistic endeavours. In this he did not follow his parents into the visual arts, but instead chose music. After an initial period of experimentation, during which he was largely self-taught, he received his first music lessons on the organ. At the age fifteen he attended music school for piano lessons. After secondary school, Serge Verstockt attended the Brussels Conservatory, where he studied solphege and sound engineering. In this period he also followed lessons in image and sound editing at the RITS (National institute for the dissemination of theatre and culture). At the age of 18, he complemented his studies on the piano and organ with clarinet lessons. After completing his studies at the Brussels conservatory, he continued his studies on the clarinet at the Royal Music Conservatory in Antwerp with Walter Boeykens. There he earned his first prize for solphege and clarinet. Through Joris Delaet’s SEM (Studio for Experimental Music), he came into contact with techniques of electronic sound manipulation. From 1983 to 1985 he studied at the Instituut voor Sonologie in Utrecht with Gottfried Michael Koenig. Koenig is a pioneer in the field of computer-assisted composition. He introduced Verstockt into formal practices of composition and revealed to him the opportunities offered by computers. These elements were to be of great importance throughout the composer’s subsequent career. Verstockt became a strong defender of the computer-assisted composition. In 1985 he organised the Antwerp Electronic Music Days. Serge Verstockt taught at the conservatory in Arnhem. Verstockt has also been active as a performer. He has given concerts of contemporary music, both instrumental and electronic, including concerts with the SEM-ensemble. In the early 1980s there was a lack of professional ensembles interested in performing contemporary music in Belgium. In order to try to meet this demand, he set up the ensemble Champ d’Action in 1988. In 1997, he resigned officially as artistic director, although an intensive collaboration has continued on the artistic level. He has received composition commissions from “Antwerpen, Stad aan de stroom”, IPEM, deSingel, Antwerp 93 and November Music. From 1997 to 1999, Verstockt was “junior fellow” of the KBC Chair for New Music in the department of musicology at the Katholieke Universiteit Leuven.

Serge Verstockt is a thoroughgoing exponent of modernism. He strongly endorses the new technologies, which he believes will lead to new ways of expression. He has systematically explored the possibilities of the computer. In recent years he has been active with computer graphics and video. His compositions are connected with various branches of the art world and he rejects being categorised solely in terms of the narrow music world. His works can better be understood as general “works of art”. His first works were compositions for tape. These tapes were produced by computers. This procedure differs substantially from the cutting and pasting that was carried out by composers from earlier generations. Verstockt defines the material before starting by means of a computer program designed for the job. The subsequent working out of the piece is carried out completely automatically by the computer. In 1985, Correlation, one of his computer-generated tape compositions, was selected for the International Computermusic Conference in The Hague. Electronic music offers a wide range of possibilities such as the (de)forming of sounds. During the earliy 1980s he was chiefly occupied with timbre, with sound in and of itself. And yet Verstockt was not completely satisfied with this. Sound manipulation provided no formal structure. The composer set out to find an alternative system that might provide a formal basis for his computer assisted compositions. In order to achieve this goal, Verstockt began to write his own computer programs. One of the programs is called Trans, a program which functions as an aid to composing, for example in the development of certain structures. While working on this program he came to the realisation that these structures could also be applied to a classical instrumental ensemble. In 1987-88 he thus began to work in a highly “conventional” manner with classical instruments, without completely turning his back on electronic music. In Champ II and DMAP, Verstockt espouses the stochastic method, as it is found in the music of Xenakis. Around 1990, Serge Verstockt sought inspiration in digital telecommunication, in the form of the LPC (Linear Predictor Code). Here the sound is dissected into various parameters. In electronic music, by disconnecting the frequency of the other parameters, room is made for articulation (e.g….Que de…, 1991). With Dec (1992), a new element was introduced into his compositional thought. Here he makes use of an abstract poem by Samuel Beckett (Comment dire). This work resulted from the juxtaposition of two sorts of analysis: on the one hand, the depth-structure of written language and on the other the analysis of spoken language. Verstockt again made use of LPC for this work. The two sorts of analysis are used simultaneously in Dec. In Noumena I (1994), he attempts to transpose the phonetic analyses of spoken text into a work for cello and piano, approaching the two instruments as one instrument, one articulation. A speaker is placed under the body of the piano so that the sound of the cello can be directly projected into the piano. As a result, the cello’s sound melds into the overtone resonances of the piano.

Starting with Apeiron (1993), Verstockt has worked increasingly with specific instruments (and performers), a consideration which received no attention in his earlier computer productions. He finds it important to pay attention to all the links in the chain of communication (composer-performer-audience). In a work such as Feuillage du Coeur (1995), he attempts to strengthen the contact between the audience and the performers. This composition was written especially with the soprano Rolande Van der Paal in mind. Apeiron was composed making use of his own computer program, Trans. The basic structure of the composition is a swing from motionlessness to furious movement and back again; back and forth between order and chaos. The movement is uniform, as all parameters evolve in the same direction. The differentiation lies in the detailed working out of the parameters. Besides the classical parameters, a so-called “third dimension” is added, a sense of depth in time by means of which Verstockt moves certain parameters to the foreground and then later allows them to fade in favour of other emphasized elements.
In Ko-Zimmer (1997), Verstockt made use of Max, a software program which allows the different parameters to be linked to one another in a flexible way. The structure is generated by a matrix.

More recently, Serge Verstockt has moved into the area of multimedia. This is perhaps no surprise, if we consider that he started off in the context of visual arts. In this he has turned to, among other things, the making of video montages. The interaction with the musicians has an important place here, as does the spatial element. In 1998, Serge Verstockt and the architect Werner Van dermeersch combined forces in Kammerspiel, an installation project featuring various artists. A virtual space was created for this project. The aim was to place images in a direct dynamic relation with music, a process in which computers are a useful tool. With Screens (1998), the composer combined electronic instruments, live electronics and computer-controlled images. The piece is something of a work in progress, which he started in 1998. Screens slowly grew into a large-scale multimedia project. The sounds of the improvising musicians were manipulated by means of computers and projected spatially into the hall while images were projected on to large screens, thereby creating virtual rooms. The collaboration with Van dermeersch in Kammerspiel was such a success that plans for new collaboration were immediately made. This resulted in the composition, De tijd loopt, de tijd staat stil (Time is running, time stands still), written for the KBC Chair for New Music and premiered in the 2000 TRANSIT festival in Leuven. The role of the computer in the creative process now becomes even more evident. The phenomenon of language is presented in various manifestations. Language can be seen as a means of communication, but also as a visual (graphic), gestural and sonorous given. In this work, music, image, space, movement and language are developed into one total picture with the help of the computer. In concrete terms, the work consists of a combination of images and live musicians. In this, the visual material (a kind of tape) is processed by the performers. In this way there is an attempt at maximum communication between the various elements. This grants the performers a degree of flexibility, so that they do not simply have to keep up with the tape material. 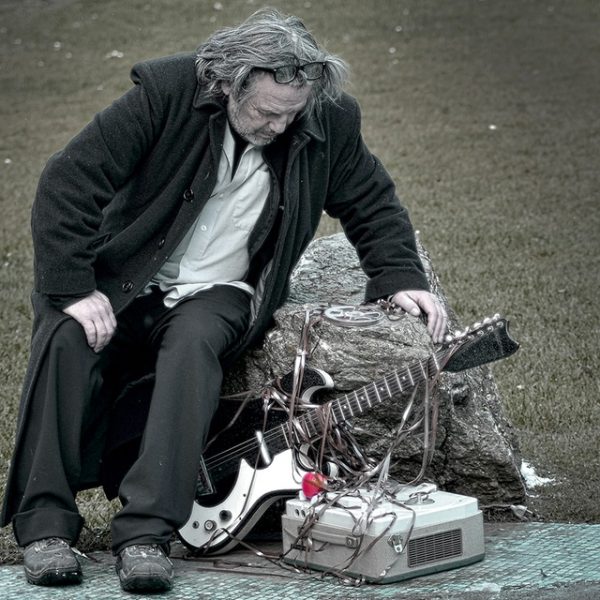