Heleen Van Haegenborgh (°1980) is a pianist, composer, and improviser. She studied with pianists Claude Coppens and Daan Vandewalle at the conservatory of Ghent, graduating in 2004. In her final master’s project, Van Haegenborgh worked together with video artist Katrien Vermeire on the actualisation of John Cage’s Song Books, translating the absurd directions for performance into musical acts. This first encounter with creation, moved Van Haegenborgh towords the writing of her own music and eventually, in 2015, to studying composition at the Royal Conservatory of Brussels. Since 2005, she is a teacher at the Muziekacademie Deinze.

Courses on improvisation with Godfried Willem Raes during her studies in Ghent, proved to be very influential for Van Haegenborgh. Improvisation became an essential medium for mutual understanding in collaborations with musicians from genres other than classical music. Some of those early collaborations include projects with guzheng-player Wu Fei for the Peking Express Festival at the Vooruit and with Erdem Helvagiolu, an electronic musician from Turkey. From 2015 onwards, Van Haegenborgh forms a duo with jazz pianist Christian Mendoza. Together they released the album Copper in 2017.

Creating, composing, improvising, and performing merge together in the artistic output of Van Haegenborgh. Besides her own compositions, between 2007 and 2011, Van Haegenborgh has performed regularly works by John Cage, George Crumb, Morton Feldman, Peter Garland, Alvin Lucier, Thomas Smetryns and James Tenney. She was also part of several music theater productions by LOD.

As a creator, Van Haegenborgh rarely works alone. She continuously surrounds herself with artists in a wide range of disciplines. She has created soundtracks for film artist Jasper Rigole, worked together with electronic musician Jürgen De Blonde and jazz musicians Lander Gyselinck and Kristof Rosseeuw. In 2017, she wrote Index for the period instruments of the Icelandic ensemble Nordic Affect and built a ‘listening scale model’ together with Nu Architects for Concertgebouw Brugge. Those numerous projects and collaborations have molded her musical language.

You can best describe the artistic career of Heleen Van Haegenborgh as a chain of diverse collaborations. Her artistic output cannot be arranged in an ordinary list of works. Many of the projects Van Haegenborgh co-produced, resulted in recordings or specific performances but not necessarily in scores. This work review concerns both individual works with scores and collaborations.

A first significant collaboration was Mock Interiors with sound artist Esther Venrooy in 2008. During recording sessions on the piano, Van Haegenborgh provided the musical material that was later digitally processed into samples for eleven short compositions. These compositions already bear several aspects that will prove to be characteristic of Van Haegenborgh’s style. The music is meticulously sound-oriented, showing a fascination for the inside of the piano and a overall predilection for slow, subtle musical movement. In order to drag the listener into the piano frame, Mock Interiors reverses the acoustic relations of the instrument. Sounds that are normally inaudible, such as resonating elements and mechanical noises, are magnified and used as compositional basis. The resulting short compositions disclose ever-expanding sound textures, where delicate timbre differences generate the main musical movement. They operate like sound environments since the materiality of the sound is primary to musical development. The formal design is intuitive and often uses drones or repeated motives to which different layers are added gradually. Most of the pieces of Mock Interior emphasize certain pitches, leaving traces of tonality and modality. Impromptu Dahlia, for instance, opens with a chain of chords revolving around a tonal center, only to be gradually flooded by the sampled piano sounds, hence blurring the distinction between acoustic and electronic sound.

The inside of the piano clearly occupies a crucial place in Van Haegenborgh’s works. In Regina, written in 2014 for “wired piano,” an actual duel is held between the outside and the inside piano, or between the piano keyboard and the piano frame. “Wired piano” refers to Van Haegenborgh’s self-developed extended technique, where the piano strings are played with a fish wire. The fish wire can be used to braid or pull the strings and thus enables the production of long sustained tones without any clear attack. This is normally impracticable on the piano. It is interesting how Van Haegenborgh notates this technique in her scores. Since the resulting tones strongly vary with each different instrument, she often uses metaphors to describe the desired sound and provides audio fragments. She invites the performer to take on a certain improvising attitude, instead of giving exact performance directions.

In the preface to her scores, Van Haegenborgh offers us insights to her compositional process, which is often inspired by literature, specific locations, or films. “I need something outside music, to create music,” the composer says. Those extra-musical elements influence the choice of musical materials and formal design, as they raise constraints and specific predicaments for the composer. For Signaux, commissioned by Havenfestival Ghent in 2013, she used a self-built instrument that operates 23 foghorns as a counterpart for the piano. This caused the performance location of the work to function as an instrument itself. The sound of foghorns is sculpted by space. It gains its sonority and volume travelling long distances through the air. Signaux thus only becomes palpable during its performances, changing shape with every new location and context. In fact, the ephemeral nature of sound and performance becomes an essential part of Van Haegenborgh’s composition. When the piece was premiered in the harbor of Ghent, the audience sat close to the piano in a shed, while the foghorns were stationed 200 meters away in open air, ensuring the sounds of both instruments to blend equally. In choosing the tone material for the composition, Van Haegenborgh had the foghorns in mind as well. Signaux develops fragmented musical debris, remnants of the deconstruction of the harmonies and melodies of Henry Purcell’s They That Go Down To The Sea In Ships. This hymn recalls the smallness of men in the face of God’s great creation of the sea.

Film is another important trigger for Van Haegenborgh’s musical creativity. 25 years ago, author Christian Janicot collected in his book Cinéma Invisible some hundred screenplays that were never realized. This book became a point of departure for a series of compositions and projects by Van Haegenborgh. In First Reading, notes, she created a soundtrack together with guitarist Frederik Leroux for László Moholy-Nagy’s film manuscript Dynamik Der Grossstadt. This electro-acoustic concert performance uses piano, harmonium, electric-guitar, found footage, and field recordings to create “a film for the ear” and investigates how music, which is essentially a time-based art, can evoke a sense of space as well.

Index for amplified harpsichord and string trio is also part of the body of compositions based on imaginary screenplays. Transit Festival commissioned the work in 2017 for the period instruments of the Icelandic ensemble Nordic Affect. In Signe particulier: néant, French writer Georges Perec listed potential film scenes where no faces are shown: a constraint initiates a creative process and challenges the artist to search for solutions. Mirroring this strategy, Van Haegenborgh set about composing Index. Not allowing intervals bigger than a whole tone became the musical equivalent of Perec’s self-imposed constraint and has a twofold effect on the composition: glissandi’s are abundant since they are used to bridge intervals, while the use of noise and pitchless sounds overcome the constraint all together. In fact, the musical limitation stimulates the composer to freely explore the sonorous realm of the baroque instruments. The work comprises two coalescent movements. In the first of these movements, chords take on the function of anchors. Here the strings come together in sustained notes after moving independently in lengthy glissandi. Floating from chord to chord, the strings produce slowly shifting clusters where only the carefully notated dynamics and changing timbres cause the music to move. As the first movement unfolds, even though the register gradually expands, the musical material moves from pitched to pitchless. The latter is caused by the increasing interventions of the “wired harpsichord.” As opposed to the “wired piano technique,” playing the harpsichord with wires, does not produce resonating tones, but rather brings about murmurs, whispers, and crackling noises. At first the harpsichord disturbs the chordal moments of the three strings but eventually prompts them to produce noise as well. While this happens, musical time is perceived to be slowing down. Even if the chordal moments occur after shorter intervals and increase in length, the music seems to thin out and slow down since the intervals are filled with silence and white noise. During the entire first movement, dynamics are soft, the strings play sul tasto, without vibrato, and “without drama.” Only in the end, when the transition to the next movement is made, does the music grow stronger. Here, the strings start making white noise among the chordal moments as well, and mark the completion of the transition to toneless material, which the harpsichord had initiated. Perec’s text did not only influence the musical material, but also left its traces on the formal design of Van Haegenborgh’s piece. Index culminates with the reading of the text. The second movement of the composition is rhythmical and consists of short, non-resonating noises, which leaves room and creates a pulse for the text. Using the Louis-sequence, a proportional sequence of architect Paul Robbrecht, a process of deceleration is mounted, causing the music to fall silent and in the end, leaving nothing but the text. 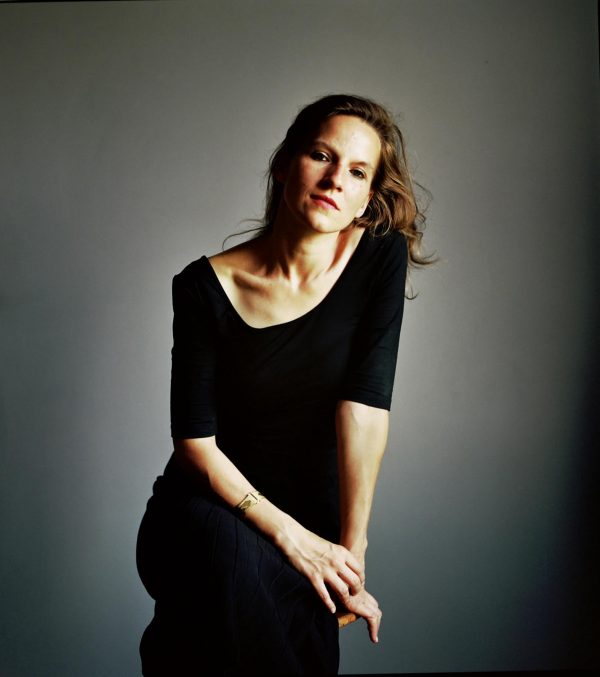