Dirk van Gorp was born on 23 October 1953 in Antwerp. He is first and foremost a enthusiastic and dynamic musician. From the age of 7 he played piano, but after several wild years as a rock and roll musician with his pop group Shub Niggurath he ultimately settled on the double bass. From 1977 to 1979 he studied double bass, harmony and orchestral and chamber music at the Royal Conservatory in Brussels. As a double bass player he feels at home in all musical genres, styles and schools. He is a member of the symphony orchestra of the Théâtre Royal de la Monnaie and was a co-founder in 1978 of The Monnaie Bass Quartet, with which he played until 2004 when the group disbanded. He toured the world with the Dutch folk group Flairck from 1984 to 1986 and as a freelance musician he has performed with such well-known artists as Toots Thielemans, Carlos Diaz, George Moustaki, Boudewijn De Groot, Dirk Van Esbroeck, Rogier van Otterloo and Wannes van de Velde. He is also an experienced performer of world music, jazz, tango, and Baroque and film music. This is particularly evident in his 2 main artistic creations, the ensemble Kontrabone (double bass and trombone, with Koen Severens) and his collaboration with Ludo Mariën (double bass and accordion). In 1977 van Gorp won first prize in the National Competition organised by the Gemeentekrediet Bank (now Dexia), and in 1981, he won the soloist’s prize and the press prize in the international jazz competition in Amsterdam with the Dirk Stuer Trio. Since the 1970s, van Gorp has composed works for smaller ensembles, which have been broadcast by the VRT, RTBF, NOS and BBC. He began as a self-taught composer, but later took lessons in composition with Wim Witteman and Eric Visser in Utrecht, and with Eric Van der Westen in Tilburg. He has been commissioned to write a number of compositions, by such organisations as the Flanders Festival (Ballad of the Irish Widow (1988)) and het Muziek Lod in Ghent (Fin de Siècle (1991) and Roelandslied (1992)). Van Gorp also composed the compulsory work Matanzas (2002) for the Axion Classics National Music Competition, and his work Pinokkio (1986) was played in the Higher Diploma competition for trombone in Antwerp. The CD of his own works, recorded with Kontrabone in 1988, won a prize from the Belgian classical music radio station, BRT 3.

Van Gorp’s compositions are an extension of his many-faceted activities as a performer, often resulting from the interaction between his different musical projects. He has thus written works for Flairck (Onder paars licht (Under purple light, 1984) and Nocturne (1982)) and for The Monnaie Bass Quartet (Circus (1993)). He has also composed a number of works in collaboration with Mariën (including Matanzas, On the Irish (2001) and El fuego de la selva (2001)) and with Severens (including La Roque d’antheron (1988), De stomme film (The silent film) or The Soundtrack (1993), Sofa (1987) and Carnaval des sports (1998)). The motivation for writing many of these works is partly the lack of authentic compositions for a particular scoring. Van Gorp’s style is also a result of his musical versatility. In all his compositions he attempts to arrive at a cross-over between the most diverse musical genres and styles. This is, for instance, evident in his compositions for string quartet, Con Fusion (2000), Eastmail Blues (2000), Getting closer (2000) and Matanzas (2000), which can be performed as independent works, but which in the same sequence together make up A Little Jazzy Suite for String Quartet (2000) and Secretum fotum (1999). In all these works, elements of jazz, classical music, folk and world music are combined with one another. The string quartet Con Fusion (2000), which takes its syntax and musical language from rock music, is an exception to this trend. In On the Irish (2001), he confronts the binary rhythm of Scottish folk music with the ternary rhythm of Irish folk music. Van Gorp generally writes for smaller groups and attaches great importance to accessibility for both the performer and the listener. His compositions often have a playful character. Circus, for example, is an audio-visual representation of a tight-rope walker and a trampoline jumper. Both Pinokkio and the Soundtrack, which were premiered at the Norwich Festival by Kontrabone in 1993, also take this audio-visual approach. The musical result of these works is reminiscent of the comic music heard in cartoons.

Van Gorp consciously remains tonal in all his compositions, although he is not averse to clusters, glissandi, non-traditional playing techniques and decidedly chromatic lines, which he tends to employ as effects within a tonal context. Almost all his works are built from blocks that contrast with one another. In his 2-voice works, these blocks are often based on a melody in one voice and a simple accompaniment or a homophonic, related melody in the other. In his works for 3 voices or more, he makes plentiful use of pedal notes and simple, recurring rhythmic and melodic patterns, which he employs as a sort of “loop”. He often links 2 voices to one another in terms of their rhythm and or melody. The voices so linked generally go through a transformation in the course of the composition. Besides the short, recurring, rhythmic and melodic patterns, Van Gorp also uses longer rhythmically pronounced melodic lines that he often repeats, sometimes in a varied form. This in effect creates 2 musical levels. In his vocal-instrumental works (such as the Ballad of the Irish Widow (1988), Fin de siècle (1991) and Roelandslied (The song of Roland, 1992)), he makes use of speaking voices, which are often superimposed over a “loop”, an ostinato motif or a pedal note. In some of the movements of these works, the composer works in a strophic form. Van Gorp also attaches great importance to text expression. His choice of texts is very broad, from anonymous Medieval Irish texts (Ballad of the Irish Widow) to the French poet Rimbaud (Le Parfum (1988)). In general, the confrontation between the different styles and genres in Van Gorp’s oeuvre is evident in his choice of musical motivic material. In his jazz compositions, such as Agde (1982), Sauntering (1982) and Ballad for Ben (1982), the typical “walking bass” holds an important place.

Van Gorp’s compositions often appear in several different forms. He not infrequently reworks them for different forces or uses the material from a particular composition in other compositions. The musical material in the Ballad of the Irish Widow, for instance, forms the basis of On the Irish, which in turn supplies the material for a version for accordion and double bass (2001), and a version for accordion, double bass and string quartet (2002). Nocturne (1982), Matanzas and Circus also exist in a variety of forms. Matanzas was first written as a string quartet in 2000 and was later reworked into a version for accordion and double bass; in 2002 the composer subsequently reworked it yet again into a version for piano and double bass. Circus, for bass quartet (1993), is a reworking of the work of the same name which he composed in 1988 for Kontrabone. Since 2005, van Gorp has collaborated with a publisher in order to reach a wider audience by presenting his music as teaching works. For this project, he is reworking many of his works into versions for solo instrument (usually a bowed string instrument) and piano. 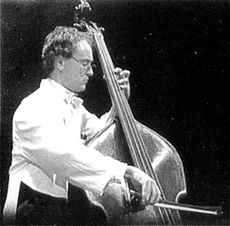