As a composer, Swerts has won numerous prizes, including the Camille Huysmans Composition Prize in 1986 for his work Droombeelden (Dream images) and, in that same year, the Composition Prize of the Province of Limburg for his Capriccio for guitar and chamber orchestra. He received the Baron Flor Peeters Prize for his Apocalyps I for organ in 1983 and in 1985 he was awarded the prize for Belgian Artistic Promotion for his song Ardennes for soprano and piano. He won the SABAM Prize for his Rotations for piano and orchestra, the work that was chosen as the compulsory concerto for the final round of the International Queen Elisabeth Competition in 1987. The newspaper De Gazet van Antwerpen awarded him its prize for his Symphony no. 1 in 1989. In 1993 a choral work earned him the Composition Prize of the Province of Brabant, while in 1993 his violin concerto Zodiac was selected as the compulsory work for the finals of the International Queen Elisabeth Competition (with a jury that included Górecki). An important moment in his career was the premiere of his large-scale opera Les liaisons dangereuses in 1996 at the Flemish opera. In 2001 the Flemish Radio Orchestra created his Second Symphony ‘Morgenrot’.

Certain characteristics can be found consistently throughout the whole range of Piet Swerts’ oeuvre. The composer has mostly worked on commission. Swerts is thus a pragmatic composer, who applies all stylistic means in order to achieve the stated aim. He succeeds in bringing together diverse stylistic characteristics through the high quality of his “métier”, a flexible writing style which he adapts in order to fulfil the requirements of the commission. For Swerts, the formal construction of a work is of great importance. The form grows together with and out of the music and usually we can see in the works that the different movements are closely related to one another and often flow organically into one another. In the development of material, a great sense of control is evident. Forced complexity is never characteristic of his manner of development. He integrates imitation, polyphonic interweaving and shifting pan-chromatic wholes. Swerts often goes to great lengths in the development of motives, with works in which the musical nucleus of the whole composition can be traced back to one elemental cell. This concentration on the smallest cell can lead either to short, pithy periods, or to passages in which he maintains his concentration for longer periods. There is either an alternation between masterfully constructed climaxes or a complete halt to the musical movement.

A few examples can serve to illustrate these general stylistic characteristics. The two works with which Piet Swerts became well known are both built on a geometric figure as the basic formal principle. In Zodiac (1992) this figure is the circle delineated by the astrological signs. For the fleshing out of the signs, Swerts found inspiration in his own acquaintances, an approach which would return in his Symphony no. 2, Morgenrot (2000). In Rotations (1987), a piano concerto based on a series of poems by Robert Schaack, the circle is again the formal point of departure, as the material is passed back and forth between the soloist and the orchestra in a rotating movement. Swerts wrote the Passio Domini Nostri Jesu Christi Secundum Marcum in 1988. This large-scale work is a composition in which various influences and references can be detected, including Bach’s St John Passion, Medieval organum and a Mahlerian elegy. We also find traces of Wagner, Bartok, Ligeti, Stravinsky and Orff. In this Passion, Swerts does not follow the Baroque conventions of the genre, but rather renews it from a personal standpoint. For instance, he ignores completely the traditional distribution of the standard roles to certain voice types. This is a through-composed work without the structure of separate pieces as in the Bach Passions. Swerts himself calls this work an o(pe)ratorio, by which can be understood a dramatic-expressive illustration of the Passion story.

A synthesis of Swerts’ most important stylistic characteristics can also be found in Magma, concerto grosso per violino, violoncello e archi (1989). The work consists of three closely connected movements, of which the third, Eruzione, is the actual core. This is an extrovert explosion of musical feeling, preceded by a short introduction, Presagio, and a scherzo-like second movement, Il gioco delle Faville. As the title suggests, Swerts here makes use of the Baroque principle of the concerto grosso. Important in this work is the development of the motives. He is able to build an imposing structure out of a single element. The interlocking rhythms create a musical architecture, which build to a coda forming the climax of the work. In this work, we notice that Swerts makes use of techniques drawn from the work of Lutoslawski; this produces moments typified by a rarefied, ethereal atmosphere. The crescendo build-ups in the first and second movements are reminiscent of the music of Ligeti. Although Magma may be seen as a relatively traditional work, the work nonetheless sizzles with energy.

Piet Swerts wrote his First Symphony between 1989 and 1990. The work is completely built on the principle of chromaticism. The atmospheric introduction is once again reminiscent of Lutoslawski. After the completion of Swerts’ major opera, Les liaisons dangereuses in 1996, the composer wrote his Clarinet Concert (1997). This work for reduced orchestra consists of one whole, subdivided into four movements. The reference to the classical concerto structure is clear, even if Swerts does indeed stray from the tradition on some points: the soloist plays non-stop, the slow movement is not independent, and careful analysis reveals that the whole concerto can be traced back to one germ cell of three notes. This does not, however, prevent the composer from building a substantial work out of this one cell. The repeated, primitive rhythm of the ostinato provides a comic note here, generating a strong field of tension with the ingenious construction of the whole.

Swerts’ most recent creation is his Symphony No. 2, Morgenrot (2000). He calls it his most personal work, a composition for the transition to the new millennium, and the chance to deal with a number of essential subjects. In his journal he says of this work: “The first three movements are based on texts from the Requiem. Central to this work is a movement for twelve-voice choir a capella which takes as its subject music itself. This central element is at once the turning point in the composition. The finale is intended to be highly optimistic, and makes use of the image of the red sky of the dawn (Morgenrot) as an image of the future. Throughout the whole composition, the musical mood evolves from highly charged and dramatic through surrealistic-impressionistic to euphoric with a motor-like drive; the work is thus in fact not a real symphony, nor is it a requiem, nor an oratorio, but a combination of the three. It is intimate chamber music for one hundred musicians, a surrealistic Schubertiade anno 2000…” 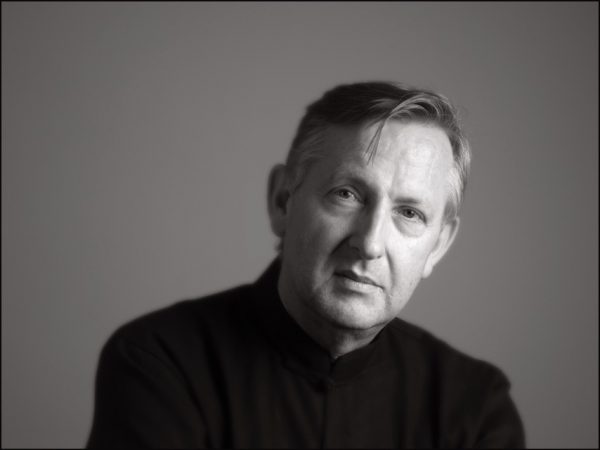