Stefan Prins was born on May 20, 1979, in Kortrijk. At age seven, he started taking piano lessons at the Municipal Music Academy of Borgerhout. From 1997 to 2001, he studied civil engineering at the Vrije Universiteit Brussel. After that, he studied for a year at the Universitat Politècnica de Catalunya (Barcelona), where he earned the title of civil electrotechnical engineer in photonics. At that time, he was already active as a pianist in free improvisation. After graduating as an engineer (2002), he began studying piano and composition at the Royal Flemish Conservatory of Antwerp, while at the same time studying music technology with Peter Swinnen at the Royal Conservatory of Brussels. In his second year in Antwerp, he began to fully concentrate on composition. During the 2004-2005 academic year, thanks to a grant from the Flemish Community, he pursued a specialization in the sonology department of the Royal Conservatory of The Hague. He also studied cultural philosophy and philosophy of technology at the University of Antwerp and participated in several master classes. In 2017, he earned a doctorate in composition from Harvard University. His advisor was Chaya Czernowin.

As a young adolescent, Prins was already composing short pieces at the piano for his own enjoyment. He stopped composing between the ages of twelve and twenty because he says he felt paralyzed by the authority of the Great Composers of the past and present. He was able to free himself of this pressure through contemporary music and improvisation. With his string quartet Zeven Metamorfosen(Seven Metamorphoses), he became a laureate of the 2001 KBC-Aquarius composition competition. In February 2006, he received second prize in the composition competition of the Week of Contemporary Music in Ghent with Erosie (Memory Space #1). Prins has received important prizes not only in Belgium, but also abroad, including the “Impuls Composition Competition Award” (Graz, 2009), the “Staubach Honorarium” (Darmstadt, 2009) and the “Kranichsteiner Musikpreis für Komposition” (Darmstadt, 2010). In addition, several of his works were selected by ISCM-Flanders as Flemish entries for the ISCM World Music Days. In 2012, he was named Young Musician of the year by the Belgian Music Press Association, and he received the ISCM Young Composers award in 2014. Two years later, he received the Kunstpreis Berlin für Musik, thus showing that his music was increasingly being noticed abroad.

Stefan Prins is musically active in many areas. As an improviser (piano, amplified objects and live electronics), as a performing musician, and as a composer, he established his name and gained fame in the Flemish music world and far beyond. Many of his compositions were commissioned by renowned ensembles. Since 2004, he has worked as a composer and performer with Champ d’Action. But Prins also works in other formations and ad hoc groups. He regularly forms a duo with shakuhachi player Horacio Curti and works closely with improv musicians Joachim Devillé and Thomas Olbrechts, with whom he founded the collective reFLEXible in 2002. Together with Pieter Patthynssens, he is the artistic director of the Nadar Ensemble. Stefan Prins regularly teaches and leads workshops in composition, interdisciplinary collaboration and improvisation. He has been a guest lecturer at the Ferienkurse in Darmstadt (2016), the Impuls Academy in Graz (2017), and the Mixtur Festival (2019), and he is a regular presence at the Nadar International Summer Schools. Since 2018, he has been a guest lecturer in composition at the Hochschule für Kunste Bern and the Norwegian Academy for Music Oslo. Since March 2020, he is a professor of composition and the director of the electronic studio at the Hochschule für Music “Carl Maria Von Weber” in Dresden.

According to Prins, No habrá una sola cosa que no sea una nube (2002-2003) can be considered his opus 1. This is where his search for a current and meaningful relationship between composer, score, performer, listener and society begins. In this score, Prins employs different types of notation in function of the intended sound result. For example, in some movements he uses traditional rhythmic notation, while in others he uses time notation. In the fifth movement, Prins allows the musicians a number of freedoms. For example, the synchronization of the different parts is often not precisely determined, and the performers are also given freedoms within their own parts in terms of duration, repeats, melodic material, etc. Although this composition already shows a tendency towards a hedonistic approach to sound, Prins only begins his search for the meaning of sound as a compositional building block in his Etude intérieure #1 (2004). This piece also reveals another constant often found in Prins’ works: the continual questioning of existing mechanisms, traditions and thought and work processes. It is in Etude intérieure #1 that Prins abandons the traditional use of musical instruments. He uses the entire piano as a sound-producing object. He plays directly on the strings with marbles. In this way, he acquires a new, vast universe of sound. To accomplish this, Prins develops his own notation system, which relies not on an absolute tonal concept, but rather a relative one. From then on, Prins’ search for the ideal notation systems for his intended sound result would become an important feature of his compositional method. A third important and new aspect in Etude intérieure #1 is the research into how memory works over time. This becomes one of the structural parameters of this piece. The conscious title of étude can be interpreted as commentary on (and a nod to) the music-historical tradition. An étude was a virtuosic piano piece aimed at a certain technical difficulty. In this composition, however, there is an abstraction of that technical virtuosity by completely abandoning the traditional way of playing. A final, not unimportant, element is the visual or theatrical aspect. Prins’ experiences as an improvising musician can also be seen here. In Erosie (Memory Space #1) (2005), Prins links the phenomenon of erosion to the way in which human memory functions. Using a computer, he created an algorithm to represent the process of forgetting and remembering. This was the first time that Prins used the computer as an influential compositional factor.

In Memory Space #2 (2006), Prins builds on the same algorithm, develops it further and this time also adds live electronics. In this work, one can discern various layers of memory. First and foremost, there is the composer’s memory, which is represented in the score. Secondly, this composition is conceived as a concert piece for recorder and quartet. The recorder provides most of the musical material, while the quartet acts as a reservoir in which the material gets stored, just as it would in someone’s memory. Furthermore, there is also the performer’s memory that is formed when studying and playing the score. This is also used by the composer. By leaving empty spaces, ‘memory spaces’, in the score, he gives the performers the opportunity to improvise with material that has settled in their memory. Last but not least, there is the technological memory. The digital, perfect memory gets ‘filled’ during the performance and can thus reproduce (transform) certain passages during the course of the composition.

Improvisation is clearly an essential element of Stefan Prins’ musical thinking. In Ventriloquium (2006), he further explores the boundaries between improvising and performing. This explains his choice of a hybrid ensemble of both classical and improvising musicians. Ventriloquium, like several other of Prins’ works, also has cultural and social significance. The idea for this composition came from the writings of Derrida, in which he states that it is impossible to improvise. According to Derrida, we always fall back on ‘names’ that are pre-programmed into our memory and into our culture. By questioning the possibility of improvising, Prins tries to consider how one can take a position as an individual in an overarching structure or society (in this case, the composition). He gives the two improvising musicians a few very general playing instructions that describe their position within the whole. The classically trained musicians receive a fairly traditional written score, in which openings are created at specific times to allow for interaction with the improvising musicians. It is precisely these various kinds of interaction that form the basis for Prins’ research into the position of the individual in an overarching unit. Just like in his other works, Prins wants to move away from the hierarchical structure of composer-score-musician. He argues, as it were, for greater engagement on the part of both the composer and the performer and for the importance of collaborating with the performer as an equal partner. In his work, he wants to question society and the relationship between the individual and today’s society (including technology) in a metaphorical and musical way.

This technological aspect is addressed in the Fremdkörper cycle. The cycle was inspired by the moment of the so-called technological singularity, when human intelligence and artificial intelligence would become equal. The idea that technological progress will ultimately surpass humans is the basis of the three-part cycle for varying ensemble instrumentation and live electronics. The word Fremdkörper, translated as a foreign object or intruder, has several meanings in this context: on the one hand, technology is a “Fremdkörper” in relation to the body, but on the other, the body is also an invader in relation to technology. In Fremdkörper #1 (2008), each instrument thus has a technological counterpart, such as an amplifier or a pre-recorded soundtrack of the instrument itself. The instrument and its extension play alternately in the beginning, but as the composition progresses, they gradually merge together until only a body remains. Unlike Fremdkörper #1, where the sounds come from only the instruments themselves, Fremdkörper #2 (2010) and Fremdkörper #3 (2010) use manipulated audio clips from the internet and intros by Michael Jackson, respectively. In addition, in the Fremdkörper cycle, Prins uses everyday objects as musical instruments. In this way, he not only places everyday objects, the so-called Fremdkörper, in a new context, but also puts the traditional musical instrument in a new light.

Prins continued working with composition cycles in the second decade of the 21st century. After Piano Hero #1 and #2 in 2011 came Piano Hero #3 in 2016 and #4 a year later. At the core of these compositions is the decoupling of action and reaction, something that we also find in Generation Kill with a more socially critical undertone. Prins was struck by the impact that social media and video had on how a conflict like the Arab Spring is experienced around the world. The ubiquity of cameras was also shown in a survey in 2011 conducted in the United Kingdom that found there was one security camera for every 32 residents. Another aspect of the way in which live video has changed our society is the use of unmanned drones in war situations. Military operations can be carried out from anywhere. In Generation Kill, the musicians use game consoles, and the piece explores the disconnect between reality and virtuality. Musicians are confronted with recorded and manipulated footage of themselves and each other, and whoever is at the game controller is in control.

Prins’ attention to the physical body that can be found in Fremdkörper is reflected in compositions such as I’m your body (2013), Flesh+Prosthesis #1 and #3 (2013/2014), Hände ohne Orte (2016-17) and This Body Functions Effectively (2019), an atypical composition for solo horn, without any added technology.

Multimedia projects: A Room Without a View, a soundscape (2004); Schling!, an electroacoustic performance installation (2005) (in collaboration with Frederik Croene and Eva-Maria Bogaert); Memory Space #3 for trumpet/flugelhorn and live electronics (2006) (choreographed by Natascha Moschini and Dorothée Depeauw); FITTINGinSIDE (2007). 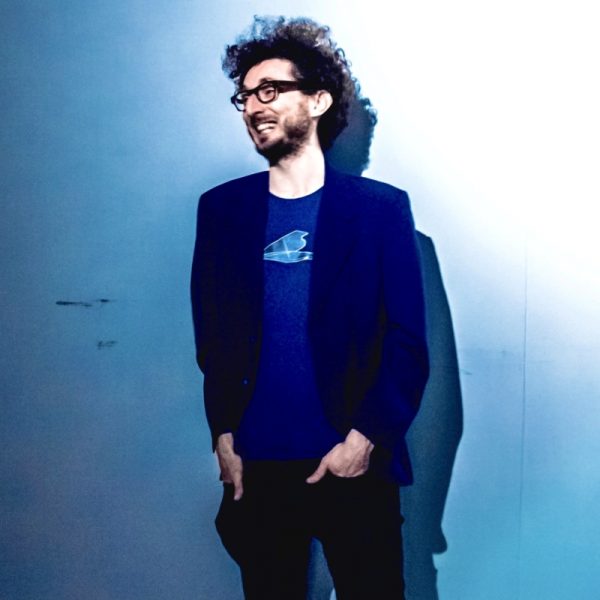