Marcel Poot was born in Vilvoorde on 7 May 1901 and died in Brussels on 12 June 1988. As the son of Jan Poot, director of the Royal Flemish Theatre, he grew up in an artistic milieu. He took his first music lessons with the organist Gerard Nauwelaerts and subsequently studied solfège, piano and harmony from 1916 to 1919 at the Royal Conservatory in Brussels with Arthur De Greef, José Sevenans and Martin Lunssens. His first prizes in counterpoint (1922) and fugue (1924) were earned at the Royal Conservatory in Antwerp with Lodewijk Mortelmans. He also studied composition and orchestration privately with Paul Gilson. Together, Poot and Gilson published La Revue Musicale Belge, a periodical that appeared starting in 1925. In that same year, Poot and seven other of Gilson’s students set up the group known as Les Synthétistes, which aimed to create a synthesis of the achievements of current musical evolutions, without sacrificing their individuality. In 1930, Poot won the Rubens Prize, which allowed him to study for three years with Paul Dukas at the Ecole Normale de Musique in Paris. Poot began his career at the State Secondary School in Vilvoorde and also taught piano, solfège and music history at the music academy in that city. He taught practical harmony (1939) and counterpoint (1940-1949) at the Royal Conservatory in Brussels before becoming director of that institution (1949-1966). Besides this, Poot held a number of important functions. He was a lecturer at the Institut Supérieur des Arts Décoratifs, headmaster of the Muziekkapel Koningin Elisabeth (1970-1976), a member of the Royal Flemish Academy for Sciences, Letters and Fine Arts, a jury member for the Queen Elisabeth Competition (1963-1981), chairman of SABAM (composers’ rights organisation), the Union of Belgian Composers and CISAC (the International Confederation of Societies of Authors and Composers), and he was a jury member for various composition competitions.

Marcel Poot interpreted the objective of the Synthésistes – to arrive at a synthesis of the achievements of contemporary music – as an attempt to combine new and old techniques. His view that contemporary music should not be allowed to deny its tradition influenced not only works he wrote in the 1920s, but his complete oeuvre. His respect and esteem for the West-European music tradition, and particularly his admiration for Bach’s counterpoint and Mozart’s spontaneity, are evident in the generally Neo-Classical structure of his works. Such pre-eminently classical compositional principles as the sonata form (contrasting themes, ternary structure) are found often in his works. Nonetheless, besides these classical elements, his works also exhibit other, early twentieth-century influences. He rarely exceeded the limits of tonality, however. Poot’s motto that “anything termed a system leads to fruitlessness” can thus be interpreted as a criticism of Schönberg’s twelve-tone system, or of serialism in general.

The first sources of inspiration for Poot were aspects of modern culture, especially film music and jazz. Charlie Chaplin’s films inspired him to write the three symphonic sketches entitled Charlot (1926). Jazz Music (1930), as the title implies, was written in the new jazz idiom. Poot, who was fascinated by innovations, wrote 7 short radio plays in this period, often with vocal soloists and orchestra (for example, Faut-il tuer le Mandarin?, 1933, and Le chat botté, 1936). In addition, the influences of Ravel, Stravinsky and Strauss can be found. Particularly in Vrolijke Ouverture (Jolly Overture, 1934), there are parallels with Till Eulenspiegel in terms of character. In formal terms, the rough outlines of a sonata form can be discerned in this overture, with its exposition, development, recapitulation and a coda, as the development and the recapitulation are melded into a whole. Although the sonata form may not be explicit as such, the compositional principles associated with the sonata form are evident enough. The first theme, a musical phrase that can be subdivided into different segments, is characterised by a wide range, big leaps, short notes (quavers and semiquavers), grace notes and staccato, and is accompanied by a pedal on C and a rhythmic ostinato played by the oboe and the clarinet in parallel thirds. It is in particular this playful, humorous motif that is reminiscent of Strauss’s Eulenspiegel. Once the theme has been presented in the flute and the violin, it is repeated by the whole orchestra. Besides the form (the musical phrase) and the structure (melody with accompaniment), the use of thematic contrasts represents another aspect of classical treatment of melody: the second theme is more lyrical, has a legato character and is made up of longer notes than the first. After their presentation, the two themes are developed in an interim passage: they are altered chromatically, and motifs are split off and developed or even superimposed. Towards the end there is a thematic transformation: the tonal material of the lyrical theme is played by the brass instruments in short, staccato notes, in a return to the character of the first theme. The coda is a spectacular finale in which an energetic dactylic rhythm (“Violement rythmé”) played by the whole orchestra leads to a climax, as a C-major cadence rounds off the overture.

Because of the success of the Vrolijke Ouverture, reactions to Poot’s oeuvre tended to emphasise only its light-hearted and rhythmic aspects, and although he objected to this (“This overture has something facile about it, no better than good casino music”, or “They overdo it by always coming back to that contentment and candour. I have written much more serious music”), these same principles recur in his later compositions, such as the Symfonisch Allegro (1935), the Moto Perpetuo (1953), or the wind octet Mosaïque (1969). In addition, the thematic relationship is striking in certain works, both in the early (Sonata for piano, 1927) and the later compositions (Mosaïque, 1969). In all three movements of the Sonata for piano, a melody is accompanied by a succession of leaps of a third. This chain of thirds creates a great sense of coherence between the various movements, even though they are contrasting in terms of tempo, tonality or rhythm (for example, the short and playful motifs in the opening movement and the lyrical melody in the second movement). Another composition characterised by a coherent treatment of themes is the wind octet Mosaïque. This work consists of three movements, allegretto grazioso, allegro vivo e scherzando and alla marcia,, where the first movement is preceded by a ten-bar introduction that serves as a motto for the whole work. The essential content, the contrast between the chordal accents or passages and the melodic lines, is presented early on in the introduction. In the first movement, the motto is treated as main theme and is immediately subjected to the principles of development and variation. Here we also see how the chordal motif is in fact a split-off fragment of the melodic line. Although at first sight the two motifs appear unrelated, it turns out that one has grown organically out of the other. A process of thinning out sets up a fluid transition to the second movement with its waltz-like character. The new theme is accompanied by typical waltz figures, and the chordal interpolations make their reappearance towards the end of the movement. The motto, here further developed, links the second movement with the third. Out of the final cell of this development grows the march theme. This theme is treated in a number of ways: as a single line accompanied by chords; contrapuntally; or doubled by several instruments. Mosaïque concludes with a stretto of the head motif. As in the Vrolijke Ouverture, it is striking the extent to which the themes in all the movements are strictly metrical, as if a metronome governed the whole work. The rhythm is almost invariably a simple subdivsion of the metre, and seldom irregular (for instance through syncopation), resulting in a fairly constant rhythmic progression. Although Poot was a great admirer of Stravinsky’s Sacre du Printemps, that work’s rhythmical complexity is not found in his oeuvre.

Despite Marcel Poot’s predilection for instrumental and abstract music, he also wrote vocal music (choral works, songs, oratorios) and theatre music (ballets such as Paris in verlegenheid (Paris in trouble), 1933, Camera, 1937, and Pygmalion, 1957). The oratorios Le dit du routier (1943) and Icare (1945) are rooted in the Flemish oratorio school of Peter Benoit. Poot wrote only two operas: Het ingebeelde eiland (The imagined island, 1929) and Moretus (1943). A striking feature of Moretus, like Britten’s The Rape of Lucretia or Strauss’s Ariadne auf Naxos, is the soloistic treatment of the chamber orchestra. After the choral works Attributs and Manège (1948), Poot wrote no more vocal music, turning again to instrumental works, including the third symphony (1952). The composer preferred this symphony, together with the second, to his other symphonies: these works are more lyrical, dramatic and expressive. The third symphony is once again structured along classical lines. The first movement is a free interpretation of the sonata form. A slow introduction (the material of which returns in the coda) precedes the first theme in the violins, flute and oboe, accompanied by a staccato ostinato. A bridge leads to a second theme that develops in long imitations. The development begins with new material, but also elaborates the main and secondary themes through imitation. The beginning of the recapitulation is not clearly demarcated, partly because the main theme is now accompanied by a different ostinato. In the second movement, the viola plays an expressive elegy, also with an ostinato accompaniment. At the same time, there emerges a contrapuntal web of ever increasing density. Finally, the opening passage is repeated. The third movement also has a ternary structure in which the melodic central section contrasts with the two outer sections. With its unpredictability, unusual intervals and chromaticism, the harmonic language of the lament tends towards atonality. Moreover, the beginning of this movement is an exception to the regular metrical structure that normally characterises Poot’s works, as 3/8 and 3/4 bars constantly alternate. The later symphonies, as well as the chamber music, are more reserved in their expression and, as ever, follow a personal interpretation of classical forms and compositional techniques. In one of the later compositions, Berceuse for flute and piano (1976), a simple theme is very subtly developed and varied. The harmony, too, remains Neo-Classical: the tonality of F major is only sporadically tinted with dissonances. 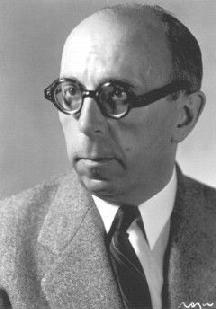