Dominique Pauwels studied piano at the Royal Conservatory in Ghent from 1985 to 1989, subsequently continuing his studies (from 1991) in Berklee Boston (Massachusetts), where he graduated with a diploma magna cum laude for both composition and film composition. In the following years he turned to computer technologies and software for compositions. He then entered the program of Algorithmic Composition and Composition with MAX (software developed at IRCAM) at the Sweelinck Conservatory Amsterdam (1991-1992). This was followed by courses at the IRCAM Académie d’été (Paris) entitled Interaction between composer, performer, scholar and new computer technologies (1993) and Working with Patchwork: Composition modelled on the frequencies of the harmonics of every instrument in the orchestra (1994). He also attended Apple Multimedia Summer Courses at Huis ter Heide in Utrecht and a course offered by KISP (adult education) entitled Multimedia: Creation and Production (1995 and 1996-1997). Pauwels has received a number of prizes, including the Professional Writing Division Achievement Award Boston For Outstanding Musicianship (1991) and various prizes for television music, including the Golden Rose of Montreux for De Mol. He has been commissioned to compose for (music) theatre, film and commercials, and since 1991 has composed for the Belgian public broadcasting corporation. Since 2004 he has been the house composer for Het Muziek Lod, often working closely with choreographer and dancer Karine Ponties.

Dominique Pauwels is one of the few people in Flanders who is able to make a living as a composer. This is mainly a result of his work for television and commercials. He himself divides his oeuvre into functional and non-functional music. The first category includes work for television, including title music for such programs as Huis van Wantrouwen, Morgen Maandag, Man bijt Hond and De Pappenheimers. Also in this category are compositions for documentaries and dance productions, as well as film and theatre music. A large part of this category consists of musical works for commercial purposes. The “non-functional” category is made up of more classical genres such as piano works, a string quartet (with electronics) and algorithmic compositions. He has also written a concerto for piano and computer.

Despite the diversity of the genres, Pauwels always takes the same basic aesthetic as his point of departure: “Nothing in music happens ‘just like that’… I am always in search of the essence of things; I want to transmit something, something that is difficult to put into words.” He usually attempts to achieve this essence by giving prominence to timbre. In most of his works, he uses two different sorts of timbres: traditional on the one hand, and electronically generated on the other. He allows these two timbres to come to a confrontation. In this process, the traditional instruments are well represented by being played with their usual classical technique and range. The electronic sounds have a hard or direct attack and are made up of a wide spectrum of overtones. These sounds can vary from sine waves to musique concrète. For instance, he uses car horns in Le chant d’amour du grand singe. The confrontation between these two timbres is usually the result of electronic interference. This interference tends to take place in the context of an aesthetically appealing instrumental situation. The interference can be sporadic, as if it were accidental, and then gradually increases, destroying or swamping the traditional timbre. It can also appear as a regular pulse in the composition. Whichever the case, Pauwels always sharply delineates the conflict between these two different elements. With their musical contrasts, the compositions are multi-layered, although in pure auditive terms they are never overly complex or obscure.

Pauwels composes separate fragments which he then develops into a whole, a process seen, for example, in the string quartet commissioned by the Handelsbeurs. The work, based on an extended tonality, consists of two movements: the first is virtuoso and complex, while the second has a more lyrical sound. The virtuosity of the first movement is concentrated less on instrumental virtuosity than on metre and rhythm. In this movement the initial context is interrupted by fauvist cells that create an outburst. The second movement is a study in double-stops, leading to an eight-voice rather than a four-voice work. The compositions’s high degree of difficulty lies in its temporal subdivisions and the arc of tension that must be generated. In Onegin, a theatre production by Het Toneelhuis directed by Guy Cassiers, Pauwels takes as his point of departure the book by Alexander Pushkin. Pauwels’ music for this work has a Romantic sound, thus relating closely to the content and the context of the play. The scoring, too, is typically Romantic (chamber ensemble with voice), but as usual he also introduces live electronics here. In contrast to his earlier works, the electronic sounds are not experienced as interference but are integrated into the whole. Pauwels applies the live electronics as an orchestral technique, as a colouring. Here again, Pauwels writes in fragments. He attempts to compose his music in such a way that the listener is always given a little encouragement just when confusion threatens to set in. Onegin is thus actually a study in creating continuity where no musical continuity appears possible. In this work, the composer also makes use of spatialising (surround-sound) with the goal of creating the physical presence of the sound.

Pauwels has often experimented with spatialisation. In Le chant d’amour du grand singe, for example, he used 36 speakers on the stage in order to imitate a Greek chorus. He also had a speaker circle very slowly above the audience, making the sound very clearly physically present. In the dance production Royal Madness, as well, Pauwels used spatialising by placing the speakers on the dancers’ backs. The use of speakers instead of live instruments creates a big, open sound. Pauwels attempts to write organically and dynamically, continually changing the function of the various elements. He also employs silence as a compositional technique. Besides compositions based on timbre contrasts, Pauwels also writes fast-paced, compelling works. The composer has a predilection for quick tempos and a rousing, driving pulse. He uses ostinatos combined with dancing melodies, with occasional references to traditional music. The dynamics are produced by energetic, spinning motives that are repeated and varied. Pauwels favours a scoring made up of both live instruments and electronics, although he never attempts to imitate an instrument with a synthesizer or a computer. He also likes to rework his own compositions in another style. For example, he re-scored his Variation 1 on Come en Went (originally for piano) for piano, hiphop guitar and lead guitar. He also experiments with musical concepts, as in De ark. This work, written for Antwerp ’93, lasts for four days; Pauwels later reworked De ark into a 30-year-long composition. This work is actually a sonata lasting a lifetime (30 years), in which a computer goes in search of the composition. The computer starts its search on day 0 and eventually plays the work 30 years later. The point here is not so much the actual result but the process that continues for 30 years. This interested Pauwels because it meant that the audience present at the work’s beginning would remain linked to it for 30 years. The actual music is made by a piano in an aquarium, linked to a computer. Over the course of the composition, you see the piano looking for the composition, but if you put your ear to the wall you can actually hear the piano as well. The idea is to make monthly recordings so that the audience can hear what music has been found during that month. 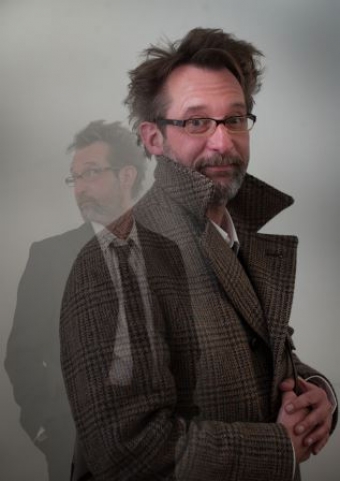