Frederik Neyrinck was born on August 14, 1985, in the city of Kortrijk in West Flanders. He received his first musical instruction from Anne Buyck, with whom he studied piano in Wevelgem and Menen. In 2003, he continued his musical studies at the Royal Conservatory of Brussels, where he studied composition with Jan Van Landeghem and piano with Piet Kuijken. In Stuttgart and Graz, he took lessons with Marco Stroppa and Clemens Gadenstätter. He further developed his craft in numerous courses and masterclasses, including Acanthes, the Ferienkurse für Neue Musik, Operadagen, and many others.

He has collaborated with various national and international ensembles, such as the Nadar Ensemble, I Solisti del Vento, Neue Vocalsolisten Stuttgart, Brussels Philharmonic, Bozzini Quartet, Klangforum Wien, Oxalys, Recue Blanche, Spectra, and many others. He is also the resident composer and one of the founding members of the Odysseia Ensemble, a Belgian chamber music ensemble founded in 2009. Together with Bertel Schollaert, Seraphine Stragier, and Tim Vandenbergh, he created Plan Libre in 2010, in which compositions alternate with improvisations, each based on ideas of the architect Le Corbusier. Neyrinck’s compositions have won numerous awards, such as at the International Composition Competition Melbourne (2010) and the MA – Stephan De Jonghe Composition Competition (2011). In 2017–2018, he was the season’s composer at Concertgebouw Brugge, which resulted in the project “Take Out Obrecht”. In 2018, he received the Austrian Staatsstipendium for composition. Music theater and opera are growing in his oeuvre. In addition to his activities as a composer, he also plays the piano in various ensembles, for which he has also received several awards, such as the NASOM grant he received in 2016-2017 for his duo with Doris Nicoletti (flute) and in 2020-2021 for his duo with Teresa Doblinger (bass clarinet / dance).

Having a special affinity for the later oeuvre of Karel Goeyvaerts, one which he acquired from his composition lessons with Jan Van Landeghem at the Brussels Conservatory, Frederik Neyrinck applies a very individual principle of “evolutionary repetition” throughout his oeuvre: a compositional technique in which musical motifs progressively change over time. In his early cycle Processus (2006-2007), this principle could be found in the gradual transformation of rhythmic cells, but Neyrinck’s interest in evolutionary repetition soon developed into a fascination with the idea of ​​musical transformation. Throughout his oeuvre, Neyrinck applies this concept to various musical parameters, such as timbre and instrumentation.

In the pieces titled Mischung, for example, working with timbre is an important structuring principle. Striking throughout this series of works are the consistently homogeneous instrumentations, which prompt Neyrinck to search for innovative sound color combinations and refinements. Within these works, Neyrinc plays not only with the fading in and out of instruments, but also with the idea of ​​sound transformation. Mischung V (2011), for example, was commissioned by Frank Nuyts (En Avant Mars 2012) and composed for five harps. Neyrinck assigned each harp a characteristic reservoir of sound material, after which he combined and contrasted the five musical entities with each other. Spanning the entire work is also an enormous decrescendo in terms of resonance and an enormous glissando from high to low, which again contribute to the notion of a musical process. In the series Aphorismes (2011), Neyrinck also works mainly on timbre: in these shorter works for solo piano, the composer focuses on playing with several sostenuto layers, by which he turns the fairly static timbre of the piano into something more transformative.

In the pieces titled Gestalt, Neyrinck instead emphasizes an innovative approach to instrumentation. Central to this is the search for new relationships between the different instruments within an ensemble. Gestalt I (2011), for example, is for a sextet, but not a traditional one in which all players are equal. Rather, Neyrinck splits the players into a duo and a quartet. Their musical material gradually evolves in such a way that in the middle of the composition the notion of six equal players arises. Later, the six voices split up again into a duo and a quartet, with the duo now playing material from the previous quartet and vice versa. In this cycle, Neyricnk’s quest to manipulate standard instrumental forms is not only reflected in his analysis of the traditional conventions of instrumentation, but is also echoed in his use of spatialization. In Gestalt II (2012), for example, the oboe and the clarinet play with their backs to the audience, whereas in Gestalt III (2012), the string quartet sits in a circle around the clarinetist. Spatialization, however, always has a practical use and is only used to achieve a specific resulting sound. Neyrinck’s ideas about transformation and spatial disposition on stage also come together wonderfully in Transforming Construction I and II, where the position of the musicians on stage is precisely specified and changes during the course of the piece.

Although some of his compositions are clearly based on works of art or literature, even these pieces do not contain extra-musical references; rather, they are based on the question of how the various visual or linguistic elements relate to each other and the music. In Il Pleut (2008), for example, Neyrinck explores the possibilities of transforming the visual elements from Guillaume Apollinaire’s poem of the same name into a sonorous medium. The concept of transformation is also at the heart of Samsa-Impressionen (2010), a work based on Franz Kafka’s Die Verwandlung. For this piece, Neyrinck takes the story’s theme as a starting point and musically expresses the metamorphosis of the main character Gregor Samsa, his changing environment, and his inner dialogues. In this way, the work’s fast and loud opening passage can be interpreted as a reference to Samsa’s sudden transformation, after which alternating ensemble and trio passages express the changing family situation and the inner struggle of Kafka’s main character, respectively. The work ends with a slow recitation of independent syllables from an excerpt at the end of the book, by which Neyrinck not only tries to portray the atmosphere of the story’s surprising final conclusion, but also creates a moment of stagnation. Rather than striving for a literal and meticulous musical setting of Die Verwandlung, Samsa-Impressionen is instead about a literary story that forms the starting point for composing a musical process of transformation.

Frederik Neyrinck’s compositional oeuvre is notable for a large number of recurring (sub)titles. These works form different series of compositions with the same starting point or theme, such as the Mischung and Aphorisme series discussed above. One of these many cycles that meanders through Frederik Neyrinck’s oeuvre is the series Kandinsky-Etüden, which refers to the visual artist Wassily Kandinsky and his reference book Punkt und Linie zu Fläche. After the first three etudes (for flute, violin and piano) and Kandinsky-Etüde 4-5 (for solo piano), the composer gives several of his other works the subtitle Kandinsky-Etüde. An example is… bassoons unfolded… [Kandinsky-Etüde 7] for symphony orchestra, in which the bassoon section plays a central role. The musical material departs from the bassoons and fans out over the rest of the orchestra. To visually enhance this, the three bassoonists sit in the center of the orchestra and form the center of the sound, even when they are drowned out by the other instruments. The ideas formulated by Kandinsky in Punkt und Linie zu Fläche inspired Neyrinck’s conception of the overall form of this composition, in which the different lines in the orchestra finally come together at the work’s end, when the central note, fa, resounds in unison.

Since 2011, Neyrinck has written numerous transcriptions and thus entered into a dialogue with music from the past. The composers he tackles are very diverse, from Claudio Monteverdi to Schumann and Debussy, but include lesser-known works like Benoît Mernier’s Frühlings Erwachen. He collaborated twice with the Revue Blanche ensemble for a full evening’s program with transcriptions by several composers. This contact with music from the past has influenced the composer’s other works, such as those with the word ‘echo’ in the title (e.g. Schumann Echo, Scriabin Echo, and 8 G.M.Echos).

In Echo de Clèves, a series of solo compositions, Frederik Neyrinck bases his writing on the score of Danse de Clèves from the manuscript of Les Basses danses by Margaret of Austria. This source sometimes serves as an abstract starting point for the development of musical material, but is at other times more recognizably present. Neyrinck compares his method to zooming in on a camera, where you sometimes get so close that the original image becomes unrecognizable, and completely new textures arise. Each of the eight solo compositions has its own distinct character and illustrates the composer’s compositional versatility.

A different kind of ‘echo’ in the composer’s oeuvre perhaps touches the essence of his working method. In Echo der Gestalt I and 3 Echos der Mischung VI, Neyrinck subtly recalls his own works. In the musical theater production Homo Deus Frankenstein from 2019, for example, he deliberately introduces sound elements from Gestalt I (2011) and Gestalt V (2012). Two works from completely different sides of his oeuvre are thus connected with each other, just like the Kandinsky-Etüdes can be both solo works and orchestral works. The great diversity (from chamber music to orchestral music, from abstract compositions to music theater) is held together by a fine-meshed and organic network of musical and substantive interconnections.

– ROELS, H., Cycles of Experimentation and the Creative Process of Music Composition, in D. Crispin & B. Gilmore, Artistic Experimentation in Music: An Anthology, Leuven, 2014.

– Landscape Construction I, on CONTEMPORARY MUSIC IN FLANDERS VII, MATRIX, 2011. 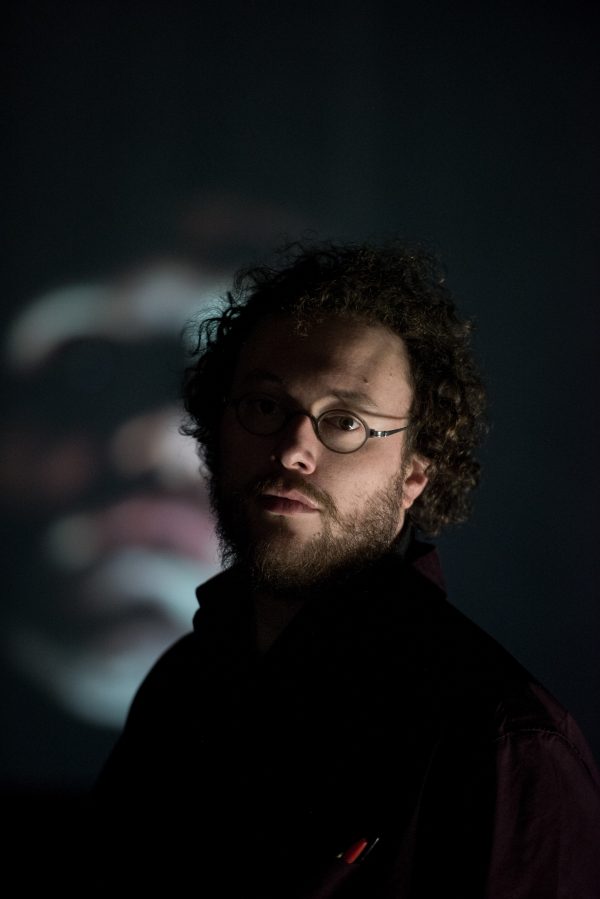