Jan Huylebroeck, alias Michael Tildis, was born in Oostende on 7 September 1956. He began his professional career in 1975. Besides being a composer, Huylebroeck is a pianist, percussionist (timpanist), organist and conductor-arranger. He also plays an array of other instruments including bass tuba, ophicleide, serpent and trombone. Jan Huylebroeck studied at the Royal Conservatory in Ghent where he earned a total of 6 final diplomas. He began his career as a piano teacher and accompanist at the municipal conservatories of Ghent and Bruges. He remains accompanist at the Bruges Conservatory (a position he has held since 1979), providing both piano and organ accompaniment for almost all the courses on offer. He has appeared in such ensembles as the Symfonie Orkest van Vlaanderen and the Beethoven Academie, playing celesta, harpsichord, piano and synthesiser. His repertoire includes piano concertos by Gershwin, Roy Newsome and Meindert Boekel.

Jan Huylebroeck is a timpanist with a number of renowned orchestras. He has his own set of historical timpani that he uses when called upon to perform with such “early music” orchestras as Anima Eterna (Jos van Immerseel, conductor) and La Petite Bande (Sigiswald Kuijken, conductor). Since March 2003 he has held the position of head of the percussion section and first timpanist of the Symfonie Orkest van Vlaanderen.

Huylebroeck was the founder, musical director and manager of the concert quartet CD-live. This ensemble was set up in 1987 with the aim of promoting electronic instruments (synthesisers and digital drums) as regular orchestral instruments. This quartet presented its own programmes (such as The Sound of Musical and Grenzeloos…en toch), but over time became increasingly active as the house ensemble for the musicals presented by the Royal Ballet of Flanders. After 17 years, the quartet ceased operations in June of 2005.

The concert trio Mannen Met Baarden, of which Huylebroeck is a member, seeks to connect with young people through school performances. Recent productions include De moeilijke opdracht (The difficult task), Wachten op Wolfgang (Waiting for Wolfgang) and Sferen voor Beelden (Moods for images). In 1982, the composer was asked to conduct De Eendracht, the fanfare band in the town of Oostkamp. Two years this music group was under his expert leadership. Over the course of these two years he won a number of prestigious prizes with the group. From 1995 to 1997 he was active as conductor and musical leader of the Royal Ballet of Flanders.

Jan Huylebroeck has his own studio and production house, Tasto Solo. This one-man operation is specialised in the making of digitally entered accompaniments, orchestrations, arrangements, the production of compositions, rental of a number of musical instruments and web design.

At the young age of 11, Huylebroeck played the church organ in his village. His passion for this instrument has continued unabated, and he is still a member of the Friends of the Van Eynde Organ of St Peter’s Church, Oostkamp. He has owned an ophecleide since 2001, and a serpent since 2003. These instruments are often used in school productions. He also plays the trombone and the bass tuba. Among the other instruments in his collection are a chromatic accordion, 2 harmoniums, a harp and a helicon.

Jan Huylebroeck’s versatility as a person is reflected in his activities as a composer, and in particular his very varied and extensive oeuvre. Many of his works have been written with a didactic purpose in mind. These works can be traced back to his activities as a pianist-accompanist at the Bruges Conservatory. Alle eendjes hebben veertjes (All ducks have feathers) is a work for oboe and piano. It is a suite consisting of 5 short movements. After a first, grazioso movement there follows a movement in 3 with the indication “Valse lente”. The third movement, a characteristic Siciliano, is followed by an expressive and cantabile moderato movement. The suite ends with an “Alla marcia”.

Most of Huylebroeck’s works are the result of commissions from cultural organisations. The Concertante Chamber Symphony was written for the Georges Maes Fund in Oostende. It is a posthumous homage to Georges Maes. In this work, Huylebroeck employs the Julius Caesar motif from Handel’s opera of the same name. The motif is very appropriate for Maes, a musician and teacher with the stature of an “emperor”. This Concertante chamber symphony is written for alto oboe, natural horn, strings and timpani, and has three movements, Allegro Moderato/Grave/Presto-adagio-presto. The subtitle of the first movement is Vleugels aan de gedachte (Wings for thought). The source of inspiration for this title is a quotation from Plato, found in one of Georges Maes’s own manuscripts: “Music is a moral law. It provides a soul for the universe, wings for thought, free rein for the imagination, joy for life and all things. It is the essence of order and elevates all that is good, righteous and beautiful.” The second movement, entitled Treurmuziek (Sorrowful music), begins with the low strings, which are then gradually joined by the other instruments. The timpani play a prominent role here. The final movement’s title, Gedrevenheid (Enthusiasm), is reflected by a driving, repetitive presto. The contrasting lyricism of the central section (adagio) depicts nostalgia (title: Nostalgie). This section then transitions back into the presto, which is interrupted by a moderato conclusion marked by the Handel motive mentioned above. This conclusion forms the end of a work fittingly symbolic the life of Georges Maes.

Megané is dedicated to Arco Baleno (a chamber-music ensemble with a permanent scoring of flute quartet and string quartet). In this flute quartet, as in other works, Huylebroeck employs traditional formal patterns. The work is in three movements, Toccata – Koraal – Rondo, although they do not function in a completely traditional way. Huylebroeck goes in search of a great many unusual playing techniques and timbres. The work begins with the cellist, who taps with both hands on the body of the instrument. Later in the work, both the flute and the strings play flageolet tones. Such techniques as Bartók-pizzicatos, harmonics, glissandos and sul ponticello are found in the various string parts. Nocturne Janneke Maan (Janneke Maan Nocturne) is another work for flute quartet. This is a suite in 5 movements. The first movement, De knal (The bang), consists of a number of fragments separated by long silences. The dynamics of the first fragment are generally piano. The first long silence is followed by a triple forte entrance that, poco a poco diminuendo, subsides into pianissimo, a nice musical illustration of the reverberation produced by a very loud bang. The second movement is based on the well-known folk melody, Claire de la Lune. 2 short sections (letter from and to the sun) are followed by the final movement, entitled Sterren and Planetendans (Dance of the stars and planets).

Also worth noting in Huylebroeck’s work is the often unusual, non-traditional instrumentation and scoring. The work Outside all other communication is scored for drum, serpent, ophicleide and strings. El Rio Araguaia calls for shakuhashi (Japanese bamboo (sometimes brass) flute, percussion, synthesisers and bass guitar.

Jan Huylebroeck also writes music for brass bands. Eendracht 140 (Unity 140) is a concert march for fanfare band, composed for the celebration of the 140th anniversary of Fanfare De Eendracht, from the town of Oostkamp, the group that Huylebroeck conducted at the time. This work was an impulse for his further interest in composition. It dates from 1983, making it one of his earliest works. Pulsation, a work for brass band, originally formed part of Three Opposit’ations. The work begins with a bass drum, followed by the rest of the percussion section. This introduction is the first reference to the work’s title. A rhythmic pulse pervades the whole piece. The other voices gradually come in with fp entries. The work is characterised by an energetic drive that eventually leads to a climactic outburst of sound.

Golden River Music (Beveren-Leie, BE)
Other works are published in own management 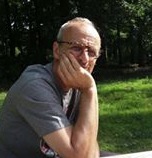