Walter Hus, besides being a composer, is chiefly a pianist and an improviser. From the age of ten he has performed as a concert pianist both in his native Belgium and abroad, appearing as a pianist-improviser from 1979. Hus was a member of the Belgian Piano Quartet and was connected with Maximalist!, a musical grouping set up in 1984, which attempted to tread a middle way between pop, rock, classical music and the avant-garde. The musician-composers who came together in this group (including Vermeersch, Sleichim, De Mey and Hus) had met a year previously in the context of the first choreography made by Anne Teresa de Keersmaeker (Rosas danst Rosas). Their image was determined strongly by influences from popular culture, an illustration of a particular mind-set which did not, however, automatically place their music outside the classic field. The music would seem best to be situated in the context of the New Simplicity, a movement that grew out of minimal music. A high degree of repetitiveness, microscopically varied rhythms and dynamics, the simple manipulation and transformation of motives, limited harmonic organisation and very minimal basic material are the most important characteristics of this trend. This tended to result in directly accessible music with a high degree of consonance. For the rest, it was chiefly the functional and discipline-crossing aspect that characterised Maximalist!: a strikingly large percentage of the music written by this collective is conceptually linked with other arts such as dance, theatre and film. This applies also to the music written by Hus after Maximalist!. Besides music for fashion shows, (e.g. Five to Five for Yamamoto (1984)), choreographies (e.g., Muurwerk [Wallwork] (1985), and Hic et Nunc for Roxane Huilmand (1991), and Devouring Muses for Irène Stamou (1997)) and films (The Pillow Book by Peter Greenaway, and Suite 16 by Dominique Deruddere), various of his compositions have been the result of collaborations with contemporary poets or playwrights (such as Stefan Hertmans [Francesco’s Paradox], Peter Verhelst [One Day They Appeared], Jan Decorte [Meneer, de zot en tkint] and Jan Lauwers of Needcompany [Orfeo]). Walter Hus has worked for Limelight in Kortrijk since 1996, at which time the refreshing new festival and CD label, Happy New Ears, was founded. At present he is working on a cycle of 24 preludes and fugues for various instrumentations.

As noted above, Hus’s music is to a large extent characterised by its “crossover” nature, which manifests itself in a number of ways. First and foremost, the larger form, scoring, and other elements are often determined by the work’s ultimate intention or its original concept (for example, a text that provided the basis for a work, or an occasion at which it was premiered). Moreover, the pop, rock and jazz influences are striking, but above all the improvisatory roots of Hus’s technique as a composer make themselves felt in the early works. His first album (Eight Etudes on Improvisation) was the result of five years experience as a pianist-improviser. More generally, this influence has revealed itself in small, germ-like cells that often form the basis of the whole composition. Such a cell is transformed, modulated, shifted, combined… In this way he creates a complex web of crossing lines, which ultimately lead to a kaleidoscopic totality of multiple dimensions, within the context of an overarching climax. Setting out from a light-footed, concise and dynamic conception, time and again Hus achieves a final result of astonishing stratification through the superimposition of countless tiny rhythmic models, often supported by tonalising ostinatos. Pianistic fullness is created by “ten fingers and the suggestion of more”. Above all, the early improvisatory works are already the “monologues interieurs” par excellence of a restless and single-minded romantic.

In 1984, as documented above, Hus was one of the founders of the non-conformist ensemble Maximalist!. Five to Five is one of the most important works from this period. Originally written for a Yamamoto fashion show in Brussels, it was later reworked for the Quadro String Quartet. It was ultimately transcribed for piano in 1996. This work was clearly influenced by the minimalist ways of Maximalist!. Minimalist techniques (such as shifting) are immediately recognisable. Typically, however, this idiom is complemented by Hus’s sense of the dramatic, which at the same time represents a contrast in relation to “traditional” minimalism.

From 1987 to 1993, Hus worked on commission for numerous production houses (deSingel, Kaaitheater), writing for very diverse forces. He composed his first string quartet for the Beursschouwburg in Brussels. In this work, the mathematical abstraction of the first movement is transformed by degrees into the emotional, dramatic character of the last movement. The middle movement (a waltz) reveals the essence of various approaches in one central formulation, highly characteristic of improvisatory performance. This string quartet is a first key work in Hus’s oeuvre. The rhythmic, pulsating style is here brought to its highpoint. He would subsequently turn his attention to melody, as is evident in the second string quartet Le Désir, and especially in Orfeo, in which the melodic quality is perfected in the writing for the voice. A considerable increase in his output of vocal music was the logical consequence of this compositional evolution.

Der Mann im blauen Mantel (1994) illustrates the next stage in Hus’s work. The romantic-melodic aspects are here pushed to the limit, but now accompanied by a mastery of polyphonic techniques. In the past, Hus had worked with a layering of small-scale, chiefly rhythmically determined cells; these now gave way to longer, melodic phrases, contrapuntally interwoven. This trend was continued in Cadenza’s (different versions of one structure for various instruments) and Nox Aeterna (the same structure, this time enlarged for piano). Le Miroir (the third string quartet) forms another culmination point through its treatment of fugue, an extension of the polyphonic techniques. In Devouring Muses and Wasteland, we encounter one last element that certainly may not be omitted in a discussion of Hus’s work: ethnic – and particularly, African – influences. This element can also be found in the preludes from his Preludes en fuga’s, on which Hus is working at present, here combined with a distilment of the fugal, first encountered in Le Miroir. Even more clearly than during his period in Maximalist!, the Neo-Romantic emerges here, as emotion, passion and obsession play an important role with themes such as the Orpheus myth (in Orfeo and Der Mann im blauen Mantel) and the triumph of love over reason (in the first string quartet). Despite these themes and the associations with, for example, minimal music, Hus’s work can in no way be classified according to a particular tradition; he writes first and foremost his own music. Striking over his complete oeuvre are the many adaptations for different instrumentations. A composition would seem never to be unconditionally tied to a particular scoring. In this, Hus sets himself outside the 20th-century “tradition” of timbre-organisation, a clear indication that in his music, content is accorded a more important role than form.

At the beginning of the 21st century, Hus completed an opera trilogy on Shakespeare adaptations by Jan De Corte. The first part of this trilogy was premiered in 2000, with parts two and three following in March 2001 and March 2002 respectively. For Meneer, de zot en tkint, the text of King Lear was adapted by Jan De Corte in a radical and pithy manner, applying his own direct and plastic idiom. Hus set this text to music for choir. This ensemble is handled like a Greek chorus that recounts the tragedy and comments upon it, without a fixed assignment of roles to particular voices. The combination of this dramaturgical choice with the power of musical simplicity results in something of a collective ritual.

Many of these pieces have been realised in diverse combinations. We only choose the original instrumentation. 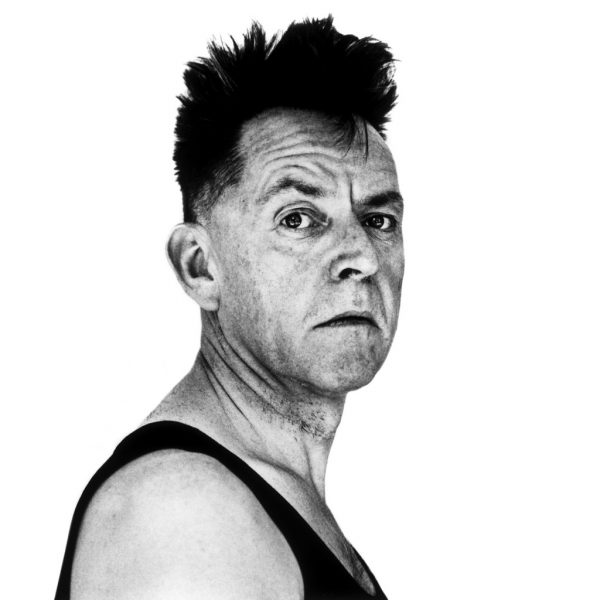