Jan Hadermann was born in Reet on 12 March 1952. As a composer he is best known in the world of brass bands and wind orchestras. His father, both a music-lover and a competent musician (as conductor, composer and violinist), was his first mentor. This first musical education within his family circle was continued at the Music Academy in Hemiksem with Marcel Slootmakers and the well-known piano teacher Liliane Esser Herchuelz. Hadermann pursued his professional training at the Lemmens Institute, first in Mechelen and subsequently in Leuven. There he earned his diploma in composition and music education in 1974, graduating with first prizes in solfège (with Lode Dieltiens), harmony (with Frans Geysen), counterpoint and fugue (with Jos Van Looy) and composition (with Matthy Niël). He went on to study with composer Willem Kersters at the Royal Conservatory in Antwerp, there earning his first prize in composition. In 1973 Jan Hadermann became a teacher of counterpoint, fugue and electronic-music composition at the Lemmens Institute in Leuven; from 1979 to 2002 he taught harmony and composition at the “Jef Denyn” Royal Carillon School in Mechelen; and since 1994 he has been a guest teacher of band conducting (theory) at the Royal Conservatory in Antwerp. Besides composing and educational activities, he is also active as a conductor and a jury member. He has been a sound engineer for numerous CD recordings and has collaborated on both LP and CD recordings as a music modulator. Jan Hadermann has written for many musical scorings, including symphony orchestra, wind orchestra, piano, choir, various chamber music ensembles and electronic music. In 1993 he won the SABAM band prize, a distinction awarded every 4 years.

The works of Jan Hadermann are characterised by his own particular sound idiom and a personal motivic style. Most of his works have been written as commissions, for such organisations as Belgian Radio and Television, Fedekam, the Lemmens Institute, the Algemeen Nederlands Zangverbond, the Flemish Brass Band Federation, the Antwerp Provincial Council and the Ministry of Culture.

In 1983, Jan Hadermann entered the world of music for wind instruments, when his work, Vier dansen for wind orchestra or fanfare band (1983) won the composition competition of the Kempisch Jeugdfanfare-orkest. Motivated by the general improvement in quality then taking place in many amateur bands, he began to work increasingly in this genre, with the result that his name often appears on the programmes of bands of all kinds, from a local village brass band in the rural area of the Kempen, to the renowned concert band of the Belgian Guides, which has included all of Hadermann’s arrangements in its repertoire.

Jan Hadermann’s extensive oeuvre reflects his predilection for music for all manner of bands. Melody in Five for wind orchestra, fanfare band and brass band (1998) is one of many examples of works that are well-known in the world of band music. In this composition Hadermann plays with the meter: a very unusual 5/8 metre is conducted alternately in 3 and in 2, giving the work a rocking character. Guernica for wind orchestra (2003) is an intense musical evocation of a chapter from Basque history, when the city of Guernica was laid to waste in 1937 by a legion of Nazi bombers dropping fragmentation and incendiary bombs. The violence of war is tellingly expressed by a head motif that evokes a feeling of terror. The head motif is recalled at crucial moments in the course of the composition, producing confrontations for the listener and spurring further reflection. With their dynamic musical progressions and direct expression, Hadermann’s many arrangements of existing popular melodies, which he enlivens with jazz influences, rhythmic verve and vitality, are highly succesful additions to the band repertoire. Woodwinds and brass are also prominent in his solo works. Renowned performers have premiered works that have since become standards in the repertoire. Spotlights on the Bass Clarinet (1992), for instance, is considered one of the most popular works ever written for this instrument. In this tripartite concerto, characterised by spontaneous melodic inventiveness and a swinging jazz rhythm, Hadermann explores all the possibilities of the instrument. Equally, When I Walk Alone, for trombone solo and wind orchestra, fanfare band or brass band (1987) has won for itself a permanent place in the repertoire of every trombonist, and has been recorded a number of times. Inventie for trombone and tape (1984), a work in which fugal elements are developed, is characterised by a relatively high degree of difficulty, as the composer calls for the most extreme ranges of the instrument. Among other works that have become standard repertoire and that are distinguished by virtuosity, melodic directness, rhythmic drive and a full use of an instrument’s possibilities are Wicker Work for trumpet and tape (1986) and the Concerto for horn and orchestra (1982).

Jan Hadermann’s solo works are also highly prized at the level of music academies, which frequently program them for exam programs. These works have been composed with an eye to their pedagogical intentions. The stirring melodies, folk elements and infectious rhythms that characterise Hadermann’s work are also present in these less ambitious compositions, making them very popular with young people.

The influence of Hadermann’s educational foundation at the Lemmens Institute is convincingly manifest in the many preludes and settings for variable forces of psalms and other songs with both liturgical and secular purposes, in which the organ naturally plays a leading role. Jan Hadermann has also produced vocal and instrumental arrangements of folksongs.

Symphonic: Concerto for horn and orchestra (1982); Spotlights on the Bass Clarinet (1992) 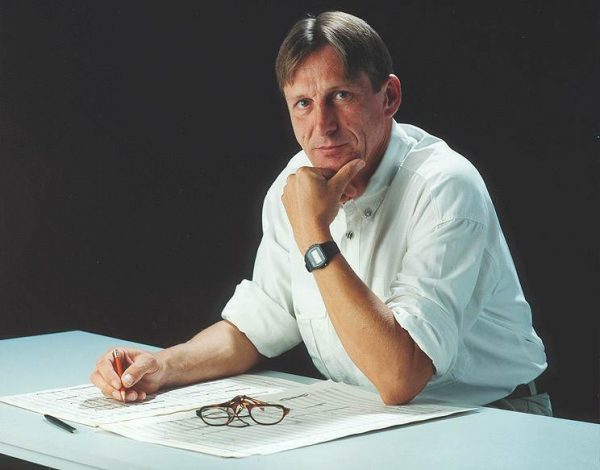