Johan Duijck was born in Bruges on 23 November 1954. He studied at the Royal Conservatories of Ghent and Brussels, earning a number of first prizes, including piano (Robert Steyaert) and composition (Peter Cabus), and the Higher Diploma for piano and chamber music. He went on to study at the Muziekkapel Koningin Elisabeth and rounded off his studies with Stanislas Neuhaus (Moskow) and choral conducting with László Heltay (London). Throughout his career, Duijck has won numerous prizes.

These include a prize in the 1983 “Lied van mijn land” national composition competition (for Met u zijn er geen verten meer – With you there are no more distances – from the Six adagio songs, op. 2), and the prize of the European Piano Teachers’ Association for the pedagogical work Zeven(-) mijlslaarsjes (Seven-league boots) (op. 13). As a performer, Johan Duijck has regularly given recitals and he is a member of the Hans Memling Trio. He has also gained international renown as the chief conductor of the Flemish Radio Choir, and he conducts the Ghent Madrigal Choir.

In 2002 he was named Chorus Director of the Academy of St Martin in the Fields (London). Johan Duijck is much in demand as a guest conductor internationally. He has conducted the Orquesta Sinfonica Real de Sevilla (Spain), the Dartington Festival Orchestra (United Kingdom), the Danish National Radio Choir, the Coro de la Universidad de la República (Uruguay) and the Capilla Santa Cecilia (Mexico). In 1994 he founded the European Youth Choir. Johan Duijck teaches piano and choral conducting at the Royal Conservatory in Ghent, the Muziekkapel Koningin Elisabeth and the Dartington International Summer School. Since 2000, Duijck has been the director of the choral conducting courses given at the Euskalerriko Abesbatzen Elkartea. In 1997 he received the Haec Olim prize, in recognition of his versatility as a musician.

Considering his activities as a pianist and choral conductor it is no wonder that Johan Duijck has primarily composed piano and choral music. Among his choral works are a number of shorter compositions, but also full-scale cantatas. In these works Duijck reveals himself as a composer who pays careful attention to the way music and word relate to one another: the composer attempts to create a general musical atmosphere to represent the deeper religious or philosophical content of the text. The musical material aids him in this endeavour. In Lentetriptiek (Spring Triptych), the folksong-like melodies and open-fifth chords evoke the text’s Medieval qualities. In order to make the important passages more expressive, he often presents a more explicit musical depiction of the text. For example, Duijck represents the text “fugit fugiensque” in Narcissus et Echo through the imitative development of a motive in quick notes.

As a teacher, Johan Duijck is regularly confronted with the technical difficulties encountered by beginning pianists. This prompted him to compose a number of didactic works, often with a progressive degree of difficulty. Two examples of such works are Klavertjevier (Four-leaf clover, 1985) and Zeven(-)mijlslaarjes (1993). The more recent work, The Well-Tempered Pianist (1999-2000), a reference to Bach’s Das wohltemperierte Klavier, also has a pedagogical intention, as it sets out to introduce young pianists to all the keys in a playful way. He has written a number of works intended for advanced piano study, including Illuminatio, commissioned by Muzikon as the compulsory work for the final exam in piano at the Royal Conservatory of Ghent in 1988.

Johan Duijck studied composition with Peter Cabus. The influence of his teacher is noticeable in a number of different areas. The work of both men can, for instance, be primarily characterised by a clear and balanced form. Like his teacher, Johan Duijck has no qualms reaching back for established forms, such as the variation form in Praeludium e tema con variazione. In a number of other works, the recapitulation of themes or motives, sometimes in variation, takes a central place. This often takes the form of a mirror image around a contrasting section, creating, in its most basic configuration, a traditional ABA’ structure (as in the piano work Recognitio or in the choral work Hodie Christus natus est). This kind of symmetrical structure can also take on larger proportions. At the end of the cantata Alma de la música (an ode to Francisco Salinas on a text by Fray Luis de León), Duijck repeats the whole opening passage, this time in mirror image; only here and there does he adapt the melody to fit it to the text. In the central movements there are also regular references to previous textures and/or melodies. Noteworthy is that in this work the reprise of the same themes or textures can be related to the text, as the fragments in which this happens are closely linked to one another in terms of text. An example of this can be seen in the first and last verses in which the author addresses Salinas concerning the heavenly sounds that issue from his music. In the didactic The Well-tempered Pianist, Duijck applies a similar form, albeit on different levels. To begin with, the mirror-form is found in each of the four “books” that make up the work. Each central section of the mirror structure has a Spanish title (that refers to Duijck’s cantata Alma de la música both textually and in terms of the thematic/motivic material used). The result of such structures is that the compositions, even the longer ones, remain very transparent, increasing the intelligibility and clarity for the listener.

This delight in form is complemented by close attention to the melody line. Johan Duijck, like his teacher Cabus, writes very melodic themes that are often lyrical as well, and that often have a tonal feel to them, even if dissonance is not far away. Duijck’s musical language can thus best be described as a combination of free atonality with a very extended tonality. Hard dissonances are usually avoided. A fluent, organic melodic whole is created through the continuous variation in the degree of dissonance. This whole is further strengthened by the free metrical organisation, as different time signatures alternate irregularly, with a succession of duple and triple metres in different combinations creating a floating, asymmetrical effect. In many of his works Johan Duijck does not use traditional time signatures (instead employing a system not infrequently found, with triangles and brackets representing the subdivisions per beat), with the result that the performers are less focussed on the rhythm of strong and weak beats and thus enhancing the fluidity of the melody.

Counterpoint occupies an essential place in Duijck’s oeuvre. On the one hand, each voice or – in the works for a larger scoring – instrumental group is often accorded its own melody, creating a complex horizontal layering. On the other, Duijck also often employs canon and fugue, as well as such attendant contrapuntal techniques as augmentation, inversion and stretto. As tradition would have it, he alternates these contrapuntal passages with more homophonic or homorhythmic segments. The religious works O magnum mysterium, Lauda Jerusalem and Hodie Christus natus est are completely built around this contrast. In a number of works, counterpoint is also a means for the composer to create a certain sense of instability. In the introduction to the song Met rood en blauw (With red and blue, from Six adagio songs), a motive is developed such that the imitations succeed one another with increasing speed, creating an ametrical feeling. Instability is even more strongly present in polymetrical passages in such works as Lauda Jerusalem and Alma de la música. 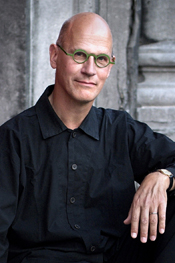