Jeroen D’hoe was born in Leuven on 25 June 1968. He studied musicology at the Katholieke Universiteit Leuven, where he graduated in 1992 (magna cum laude). From 1994 to 1998 he taught harmony there, and from 1992 to 1996 he was an academic assistant there in connection with the ABB chair for new music, the Karel Goeyvaerts research project and the development of the UniSono ear-training computer program. At the Lemmens Institute, also in Leuven, he earned first prizes in solfège (1988), harmony (1989), practical harmony (1991), counterpoint (1991) and fugue (1993). He also received his “Meestergraad” in composition with Piet Swerts in 1996. D’hoe took an extra year in composition at the same institution in 1998. Starting in the Fall of 1998 he continued his studies as a composer at the Juilliard School in New York, on a grant from the Belgian American Educational Foundation. In 2000 he earned a Masters Degree there with John Corigliano and began on his doctorate, to be completed in 2003. He also taught ear-training at the Juilliard School starting in 1999. In 2001, Jeroen D’hoe won the Juilliard Composer’s Competition with Wavechain, a composition for piano and orchestra.

Jeroen D’hoe’s idiom consists essentially of two elements: on the one hand he takes inspiration from techniques of composition developed by composers over recent decades, while on the other he maintains a strong link with tradition. He feels a particularly strong affinity for twentieth-century composers such as Charles Ives, Aaron Copland, Witold Lutoslawski, György Ligeti and John Corigliano. Generally speaking, his roots are in the major repertoire for symphony with its direct expressivity. In addition, Jeroen D’hoe attaches great importance to his training as a musicologist and the research that he undertook in connection with these studies. This aspect is just as important as his purely musical training. He holds that an historical, aesthetic and analytic perspective – seen from musicology – is an indispensable background for composing. He thus aims for an ideal interaction between the artistic and the scholarly.

In Yeats Songs for soprano and orchestra (1995), one of D’hoe’s first compositions, the direct, expressive writing style is already central. This song cycle is based on four poems from different collections by the Irish poet and Nobel Prize winner, William Butler Yeats (1865-1939). The textual content of these songs is very directly set to music by the composer. For each song he creates the appropriate mood for its text by means of a refined instrumentation – in which the wind instruments in particular play a prominent role – in combination with an expressive vocal part. The content of the poems is highly diverse. In The Old Men Admiring Themselves in the Water, several old men spout their life wisdom: “Everything alters/And one by one we drop away” and “All that’s beautiful drifts away/Like the waters.” This is followed by the short Memory, with its playful tone. Summer and Spring, a bucolic ode to youth, is the longest song. It also contrasts with the other songs through its more introverted character, which is expressed in the instrumentation; the soprano is initially accompanied mainly by the strings, later by the brass as well. The final song, A Drinking Song, looks for truth in a glass of wine. This is a song to be sung almost literally in one breath.

In 1995 the composer wrote his Partita for recorder quartet, commissioned by the Flanders Recorder Quartet (Vier op ’n rij). The work consists of five movements, Preludio, Valse, Adagio, Scherzetto and Finale, and takes a playful approach to the typical elements from the recorder literature, confronting them with new, experimental techniques. From its outset, the prelude-like opening movement combines different stylistic registers. Valse evolves, after a dramatic opening, into a contrast between the legato lower voices, which shift in parallel, and a staccato upper voice. The structure is dynamic, strengthened by the use of the Flatterzunge technique. In the Adagio, the composer creates an intimate atmosphere by employing the lowest recorders with their typical timbre, by creating striking harmonic constellations and by using small and diminished intervals. The solo passage for bass recorder emphasises the fragile and intimate character of this large instrument. The movement ends as it began, on a unison f. In sharp contrast is the Scherzetto, with its shrill and high notes, rapidly repeated tones, and the colourful shifting of the different voices, often at a semi-tone remove. The Finale is set in the middle to low register. Striking here is the percussive use of the bass recorder.

Most of the compositions by Jeroen D’hoe have been commissioned. When asked whether he considers himself a composer working at the pleasure of a patron, or a composer working for himself, he answers: “The intrinsic interest and motivation of the composer to write a certain work is of course crucial to the creative process. A composition commission (with the performance opportunity that goes with it) makes it possible for a composition, and a certain vision that lies behind it, to reach an audience. The question as asked implies values that for me are not necessarily antagonistic. The two can be perfectly united, to the advantage of the patron, the audience and the composer.” Such commissions have included his Adagio for oboe sextet, for Piacevole (1996), Trancircle for orchestra, for the Beethoven Academie (1996), and the Cummings Songs for soprano, violin, piano and orchestra, for Collegium Instrumentale Brugensis (1998). The latter composition, a song cycle on poems by the American poet e.e. cummings (1894-1962), is conceived from the soprano part. D’hoe states that he composed the vocal part first, with as yet no thought of the orchestration or the harmony. Drawing on the text, the composer created a reservoir of musical material which then generated the rest of the score. The aim is an organic development and a balanced distribution of the basic musical material. This manner of working guarantees consistency, on the levels of both overall form and expressive detail. Despite the fact that this is a postserial manner of working, expansive melodic arches, categories such as build-up and dissolution, and a clear feeling for expression are central to handling the text. This expression was already present in Yeats Songs (1995). The difference between the two song cycles is, however, that the Cummings Songs draw on a musical reservoir, thus creating a more tightly knit unity, while in the Yeats songs the vocal part and the ensemble are more complementary, proceeding from a more direct sense of text expression. The work was premiered by three winners of the Queen Elisabeth Competition, soprano Cathérine Vandevelde, violinist Véronique Bogaerts and pianist Jan Michiels, in collaboration with Collegium Vocale Brugensis conducted by Patrick Peire, on 25 June 1998 at the Stadsschouwburg in Leuven.

In 1998 Jeroen D’hoe moved to New York to pursue his further studies at the Juilliard School with John Corigliano. This gave him the opportunity to further develop his artistic vision. He identified strongly with the aesthetic of Corigliano’s more progressive works, such as the Clarinet Concerto, Symphony no. 1, Altered States and the String Quartet. D’hoe’s central concern was an candid combination of direct expressivity and communication with the audience on the one hand, and a broad and technical sense of form on the other. A work should try to move the listener while at the same time having a recognisable form and being technically surprising. D’hoe feels that the most important evolutions since his period in the United States are evident in his more extensive orchestral palette, the integration of modern techniques and a “bigger” dynamic and orchestral scoring. The first work that D’hoe composed while in New York was Wavechain for piano and orchestra (1999). This work was premiered by Erik Huebner, piano, and the Juilliard Symphony Orchestra, conducted by Jeffrey Milarsky. Among other works written by D’hoe in New York was Waves for oboe and piano (1999).

The Violin Concerto (2000) was written on a commission for the Flemish Radio Orchestra. D’hoe treated as a privilege and a great artistic challenge the fact that the work had to be composed as a commission. He was aided by the musical feedback from violinist Otto Derolez, who would premiere the work. As in other works, D’hoe drew inspiration from the rich history of the genre, which necessitated thorough reflection, not only on the genre, but also on his choice of musical language, style, and form, and on the work’s general artistic statement. The characteristic versatility of the violin helped shape the two main themes of this concerto, a stately, lyrical melody and a quick, rhythmic theme. The contrasting nature of the two themes fulfils a clearly structural function. The composer also points out that the thematic-motivic form of the composition is strengthened by the structural organisation of three fixed chords. These chords have a logical relation to one another in a way comparable – in general terms – to functional tonal harmony: the gradual development of a dissonance (a combination of sevenths), through a more consonant chord (a combination of sixths), to the most consonant chord (a layering of perfect fifths – a reference to the tuning of the violin). The structural pillars of the composition are supported by these three chords, reinforcing the auditive experience of the overall form. For D’hoe, the correlation between the form and the thematic and harmonic material forms the basis for a natural dialogue with the listener: the work’s emotional communication and structural clarity strengthen one another, thus permitting a complete aesthetic experience.

That the collaboration with the Flemish Radio Orchestra was a fruitful one is borne out by the orchestra’s commissioning of D’hoe’s next work, the Festival Anthem (2001). The composer himself describes the work as a festive orchestral work that is pleasing to the ear. The work again takes as its point of departure a musical reservoir, in this case referring to old English hymns. He composed a recognisable, tonal melody, intended as a personal expression of an open, extroverted and solemn feeling, in the hope of conveying this in as creative a way as possible. Besides several lyrical solo parts, he worked with dialoguing groups of instruments – with shifting clusters – and prolonged chords. In this he considered it essential that a particular melody or motif should suit a specific instrument or should by well projected by an instrumental group or the whole orchestra. At present, D’hoe is preparing a third work commissioned by the Flemish Radio Orchestra, the Symphony no. 1. 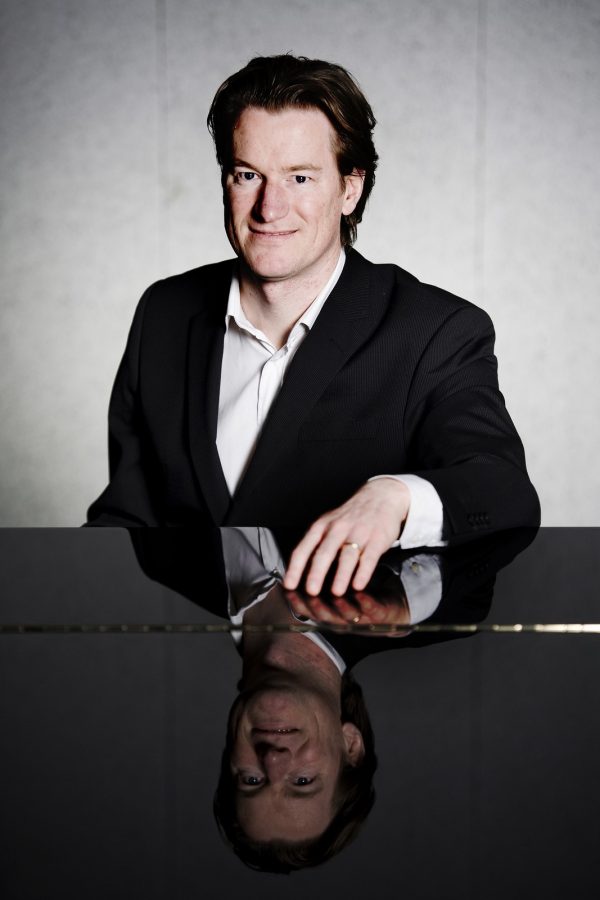