Koen Dejonghe was born on 27 June 1957 in Kuurne. He studied at the Lemmens Institute in Leuven, where he received a combined Diploma in Piano (under L. Kende) and Music Education in 1982. He subsequently earned his Higher Diploma for Chamber Music in 1986 from the Royal Conservatory in Antwerp as well as First Prizes in Fugue in 1990 and Composition (under Willem Kersters) in 1994. As a pianist, he participated in courses in Weimar and Bergamo, and has made numerous recordings for the Flemish radio and television, as well as accompanying instrumentalists in competitions and recitals. He has received many prizes for his work as a composer. In 1990, he was awarded first prize in the Muizelhuis Composition Competition for Chamber Music for his Four pieces for cello quartet, and received awards in the Provincial Competition of the Province of West Flanders for his Gezellesuite (1993) and for Sintra (1996), a ballade for orchestra. With his second string quartet he won the tri-annual Jef Van Hoof Prize in 1998 and was a laureate of the composition competition held by the Royal Academy of Sciences, Letters and Fine Arts of Belgium. In 2001, finally, he received awards for best orchestration at the Song Expo International Composition Competition for his orchestral work Jace and for his Violin Concerto. Koen Dejonghe has held a position at the conservatory in Antwerp since 1986, teaching practical harmony and improvisation. He currently also gives classes in accompaniment, instrumental ensemble performance and harmony and counterpoint at the music academies of Sint-Niklaas and Antwerp.

Koen Dejonghe may be described as a “late bloomer”, having produced his first composition only at the age of 32. He had in fact previously written some pop music and several light and simple occasional pieces, but only when his Four pieces for cello quartet (1989) won first prize at the Muizelhuis Concerts Composition Competition did his career as a composer take off, launching him into intensive activities in composition. Like many contemporary composers, Dejonghe seeks points of contact with a musical past which can be the starting point for new ideas. From rock and pop – the British rock band Yes was one of his favourite groups – for instance, he draws the directness with which this music conveys its emotion. Dejonghe aims to write music that is rhetorical: by means of the parameters of music, he sets out to create works with a high degree of expression, where the communication of feelings is not inherent to a particular musical language. The public should be able to grasp ideas and invest them with meaning regardless of the style or the genre.

Starting around 1990, Dejonghe worked on the development of his own musical language. Whereas in earlier, more minor works he regularly made use of repetitions of intervals, this technique would now evolve into the employment of more extended but still recognisable motives, which are often reworked canonically in rapid succession. Despite a strong metrical structure, this last element creates an unsteady and ametrical feeling as well as a stereophonic effect (“phase shifting”). Longer lyrical phrases are nonetheless not exceptional in his work. These are often placed in clear relief, in opposition to the totality of small, rapidly-circling motives and repetitive figures, which are in turn given canonic treatment.

Dejonghe’s oeuvre comprises more than 50 works in various genres, from orchestral to solo works, from choral works to Lieder and written for both professional and amateur or student performers. Amongst his most important works in a first period are the three songs on texts by the Flemish poet Guido Gezelle (1992), Three Sonnets on a text by Hugo Claus (1994), the orchestral ballade Sintra (1994), and the Second string quartet (1997).

Jace, an Uncalled Answer (1998) occupies an important place in the work of Koen Dejonghe. From the point of its composition, we can distinguish a second period that includes the aforementioned Jace, the Concerto for violin and chamber orchestra (1999) and the opera Ket (2000-01). Dejonghe now attempted to free himself from his academic artistic education by turning his attention chiefly to the effect of sounds on the listener. The scoring for Jace is rather daring – including, for example, electric guitar and bass guitar but without percussion – with a text written in a nonsense language by the composer himself. Dejonghe now used the pitch class set-theory of A. Forte and tended to work with a fixed tonal centre. Both of these techniques offer the possibility of furthering a work’s recognisability, sense of connection and degree of unity.

In his Violin concerto (commissioned by the Flanders Symphony Orchestra), Dejonghe again uses no percussion instruments and, as in Jace, applies set theory. The second movement is characterised by scalar figures – often heard in this composer’s music – which he frequently contrasts with a chorale-like texture, again resulting in a close interweaving of stability and instability. The work with sound-fields and the resulting layered texture is a technique encountered often in Dejonghe’s oeuvre. Notable in the melodic form is the frequent use of grace notes (sometimes many in succession). This fact, together with the presence of a tonal centre creates a remarkable, contrast-filled tension between agitation, caprice and stability, vagueness and directedness all at the same time. Willem Kersters, Dejonghe’s composition teacher and good friend died as Dejonghe was working on the violin concerto. Like many of Dejonghe’s works, this violin concerto ends “al niente”, in silence.

In the opera, Ket (commissioned by Youth and Music Brussels), which was premiered in September 2003, under the direction of Patrick Davin, Dejonghe’s style reaches maturity. Most of the stylistic elements mentioned above, such as the use of elements from pop music, set theory (in Ket, each character is accorded a set), the clearly-defined approach to all the parameters (attention to other parameters than simply the most evident pitch parameter), the use of repetitive elements, working with sound fields and stratification – all these elements are present, as the music reaches new levels of rhetoric. In addition, we find in this work such fixed forms as passacaglia, “tango nuovo”, waltz and lieder. All these techniques give the whole a strong sense of coherence. The libretto by Geert van Istendael tells the story of the city of Ket, a city of many forms, many colours, many aromas, many slums, many offices, a multicultural city of juvenile gangs and megalomaniac urban developers. Against this background, the story is told of an impossible love and of corruption, passion and cold-blooded calculation.

Choir and piano: Triptiek on lyrics by Leonard Nolens (1995) 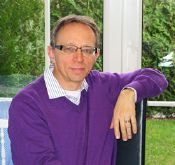