Eric de Visscher (Leuven, 23 November 1961) studied philosophy and linguistics at the Katholieke Universiteit Leuven, earning his candidature and licenciate diplomas in these disciplines. During his studies he came into contact early on with such composers as John Cage. On Cage’s advice, de Visscher went to Toronto in 1984 to study with James Tenney at York University. In 1986 he graduated from that university with a Masters Degree in Fine Arts, having received a solid grounding from Tenney in both European and North American music traditions. In that same year, Erik de Visscher returned to Belgium to work for Youth and Music in Brussels. In 1987 he worked in Paris as a researcher at the IRCAM (Institut de Recherche et de Coordination Acoustique/Musique). For the next three years he was an assistant producer and archivist at the Logos Society in Ghent. At the same time, he earned the DEA-Etudes Artistiques diploma at the Université de Paris VIII. Shortly thereafter he began doctoral studies in music aesthetics at the University of Ghent. Because of his many other activities, this doctorate has not yet been completed. From 1992 to 1996 he offered his expertise to the Ars Musica Festival in Brussels, where he worked first as assistant producer for educational projects and then as artistic director. At this time he was also Artistic Adviser for Twentieth-Century Music for the Philharmonic Society of Brussels. In 1997 he moved to Paris, where he became artistic director of the IRCAM, a position he still holds. Besides his permanent professional activities, Eric de Visscher has written numerous music criticisms for such music periodicals as Crescendo, Musiktexte, Musicworks, Dissonances and Positionen. He has worked as radio producer for Deutschlandfunk, Hessischer Rundfunk and the BRTN (Flemish section of the Belgian state broadcaster); he has delivered lectures in Akiyoshidai, Barcelona, Brussels, Darmstadt, Essen, Kiel, Liege, La Chaux-de-Fonds and Rouen. He has also provided artistic advice for various musical productions of the Kunstenfestival des Arts and the BRTN. De Visscher has also sat on the Commission Consultative de la Musique Contemporaine of the Ministry of the French Community of Belgium.

Besides all his organisational activities, Eric de Visscher has, until recently, always found time to compose. Despite the fact that his works have been composed over the relatively short period of approximately ten years, they show a clear evolution. He made his debut as an “amateur” with With hidden noice, a studio work for piano and tape. He created this recording in 1984 together with Bauduin Oosterlinck and Dominique Lawalrée. In 1988 he reworked the composition to allow it to be performed live. During his studies with J. Tenney in 1985, Eric de Visscher wrote three works, which he now regards more as studies: Untitled for flute, Landscape for oboe, clarinet and cello and Tunes and Tones for Gamelan ensemble. These early compositions are characterised by their simplicity, the traditional notation which he still exclusively used at the time, and the feeling for sonority and rhythm. In With hidden noice, for example, the insertion of several bars rest after a short motif allows the sounds produced by the piano to resonate in the space. Further on in the work, the piano functions as percussion and rhythm dominates.

In Canada, partly through J. Tenney, de Visscher was introduced to both European and American music history, with an emphasis on the twentieth century. His compositions written after 1986 can thus be situated in the line of the post-war (1945) avant-garde, as represented by such figures as Stockhausen, Cage and Boulez. From Scratch for two saxophones (1986) was the first result of Eric De Visscher’s conceptual ideas concerning notation and composition. This puts the compositional creativity of the performers to the test, as not all the music is notated. In section A, the players are presented only with the sound material which they may freely use within a determined period of time. Section B is fully written-out, with many rests. In Section C, these rests must be filled in using the material from A. In Within Sound for two cellos and percussion (1988), de Visscher goes a step further. For the notation of the percussion part, he borrows material from The King of Denmark by Morton Feldman. De Visscher was intrigued by alternative notation systems as a representation of expanded sound possibilities, and improvisation within the limits of a certain set of instructions. The piano part consists only of glissandi and arpeggios to be played within a strict time limit. The performer is free to play the piece either forwards or backwards. The aspect of improvisation would continue to play a prominent role in all his later works.

In 1988, de Visscher composed The Ives Memorial Portable Spatial Hall for clarinet and tape, a commission for Auto-mobile/Arte Sonante. The work is to be played in a car, with the clarinet part consisting of separate wholes, pasted on the windows. The order of the works is completely up to performer. The work thus differs from Zyklus by Stockhausen, in which the form becomes fixed from the moment the performer has chosen the starting point. The musical material is also more exactly predetermined. Not only the aleatory aspect of the composition is of importance, but also the elements of movement and space, since the performer is obliged to move around in the car in order to play. The aspect of space is important in a different way in One more than three for toy piano or piano (1990). This work was commissioned by the Logos Society in Ghent for the inauguration of a hall in the form of a tetrahedron. The score, like the hall, is structured as four equilateral triangles.

Seven Bagatelles (1992) is a composition for chamber ensemble. This composition, too, is closely related to music of the 1950s and 1960s in terms of its concept and notation. The performer plays a very important role and is closely involved with the composition process. In other words, the music is not always completely predetermined. The large form of the work is fixed and, as the title suggests, consists of seven separate bagatelles. In each section, a different instrument takes the lead. The first and second bagatelle are contrasted in tempo and voice leading, but both are completely predetermined. In the third movement, the aleatory aspect makes its appearance. The melody instruments all have the same material but may or may not enter simultaneously and can insert repetitions as long as the ostinato theme in the percussion continues to be heard. The result is that the overall combination of sounds can differ from performance to performance. In the fourth movement, the indeterminacy goes a step further. The classical music staff is also abandoned. The clarinet has a written-out part, but the other voices are accorded only a certain number of pitches and a series of symbols. Using the clarinet’s material plus the symbols and the pitches, these voices must enter into individual dialogues with the clarinet. In the fifth movement, the performers show their improvisational talents: a first group of instruments transforms and imitates the material from the flute part, while a second group does the same with the material from the first group. In the sixth bagatelle, the different parts are independent of each other, but each part is completely written out and they share the same tempo. In the seventh and concluding movement, the oboe becomes the leader. The other instruments have only to play fragments from the other bagatelle. The moments when these fragments are to be played, their order and their tempo are all decisions to be taken by the players themselves. This work is very much the keystone of Eric de Visscher’s oeuvre.
It is the incarnation of all the musical ideas that appeared in previous works.

In Stille und Lärm for chamber ensemble (1993), the aleatory element remains central but is now cast in a different concept. The work consists of three bagatelles played simultaneously. The principle is something of a free development of Gruppen by Stockhausen. The string quartet, the pianos and the percussion function as three independent groups that begin and end at different moments. The instrumentation is based on Erik Satie’s Messe des Pauvres, as clearly heard in the pianos. The piano parts consist of movements of two chordal evolutions that are played very fast and with rapidly changing tempi. The result is a tonal-atonal progression of movement throughout the composition. However, the evolution that characterises the piano parts is undermined by the element of chance in the way the two pianos coincide with one another and with the other instruments. Through the non-functional coincidence of the musical material, the arc of tension is nullified and the music seems to lead nowhere. De Visscher links a theatrical element to this by having the string quartet begin as the audience starts to enter the hall to take their places. The two other groups enter later, play their parts and then exit again.

As the short analysis of these works shows, the work of Eric de Visscher can be situated in the line of the avant-garde composers since 1945. He makes use of a number of principles and ideas typical of these composers, although his results are generally somewhat simpler than theirs. Characteristic of de Visscher’s approach is the working out of an original concept whereby the element of chance and the role of the performer have increased importance. Since becoming artistic director of the IRCAM in Paris, de Visscher has no longer found the time for composing. He has not, however, completely given up spreading his musical ideas. As artistic director, he has daily discussions concerning the works being created by composers at the IRCAM. He works closely with these composers in order to realise new sound possibilities, making use of the latest technology and instruments. In this way Eric de Visscher’s ideas find their way into the work of others. He has himself never used electronics in his compositions but now finds himself at the heart of applications of new electronic sound- and composition-possibilities. 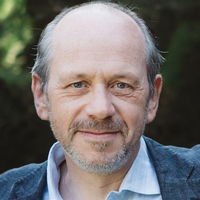