Kris De Baerdemacker, born in 1972 in Ghent, began his musical education at the Academy for Music, Word and Dance in Aalter, where he studied piano, cello, organ and music history. After his studies as a translator-interpreter, he studied composition at the Royal Conservatory in Ghent in the class of Godfried-Willem Raes. He concentrated on experimental music in which the relation between the composer and the performer is called into question and in which the concept of electro-acoustic audio-landscapes takes a central place. He has taken part in workshops, including Sound Travels with Darren Copeland, a workshop on the spatialisation of electro-acoustic music. Netmusic, a composition for internet sites, is the result of De Baerdemacker’s collaboration with the computer science department at the Hogeschool van Gent. During his studies he also worked on the project De Ronde van Vlaanderen, an exchange project between composition students at the three Flemish conservatories. Since completing his studies, De Baerdemacker has worked on a series of compositions for player piano, created at the Logos Society and heard in performances in the Netherlands and France. Since 2002, two years after his graduation as a Master of Composition, De Baerdemacker has been working as a musician and production assistant in the studio for electro-acoustic music at the Logos Society, a centre for sound-art and experimental music. In 2002, De Baerdemacker participated in the occasional work commissioned by Q-Q2, Sie sterben so schön, a confrontation between musicians, samples and indeterminate compositional material, for the 60th anniversary commemoration of the deportation from the Breendonk concentration camp.

The work of Kris De Baerdemacker can be subdivided into music for instruments, music for mechanical instruments and music for loudspeakers.

In his instrumental compositions, De Baerdemacker opts for a broadening of the manner of sound production by building indeterminate elements into the score and by employing graphic notation. As in Lachenmann’s compositions, this serves to activate suppressed sound possibilities and make unusual opportunities for expression available to the composer. The musician is given an active role in the composition process and thus his or her expression is not hindered by the determination of the score. In several of the Bagatelles for various scorings, he does not conceive of the instruments as traditional pitch-instruments but runs counter to conventional playing techniques by prescribing atypical ways of playing (rubbing the strings on a guitar, striking the body of the guitar/cello). Through a combination of traditional and graphic notation, he leaves open to the performer the degree to which he or she participates in the composition process. In this way, he clearly revolts against the concept of the “authoritarian composer” and against traditional compositional practices.

A second group of compositions is written for mechanical instruments, with the player piano in a central role. De Baerdemacker’s interest in Gestalt psychology is evident in a concept that time and again forms the basis of his studies for player piano, although the influence of Conlon Nancarrow also plays a role here. As in Nancarrow’s studies for player piano, a small motif/Gestalt is thoroughly developed by applying minimal variations, leading to a climax. In Study #1 (1998), for instance, a group of four notes is repeated, either identically or in mutation, resulting in a long chain of motifs with a constant rhythm, which is then imitated in other voices. Above this is the drone of superimposed imitative motifs, a motif of three notes that takes the music to its first climax through rotation: the motifs revolve ceaselessly around a single note while in other voices new chains of motifs build up towards a second highpoint. When the remaining voices all play in unison, the music stops. In the Study # 3 (1999), the Gestalt is a cluster that is slowly built up and rounded off by a melody. The fragmentation and the dismantling of the cluster is alternated with chords that take over the rhythm of the original melody. In Study #6 (2000), five “basic chords” form a sequence that is repeated with each note of the chord in a different octave for each repetition. The octave-positions are chosen in such a way that the chords (“inversions”) suggest a harmonic movement resulting in a phrase of sorts. Since the progressions move very slowly, the work gains a quiet, somewhat meditative character. From the seventh study on, the player piano is joined by other instruments, including a virtual vibraphone, and mechanical instruments developed by Godfried-Willem Raes, such as the vibi and the harma.

Two types of work can be distinguished among De Baerdemacker’s compositions for loudspeakers: compositions for tape with concrete sound material and compositions for tape constructed out of electronically produced sounds. Central to the works for tape with concrete sound material is the concept of so-called “soundscapes”: the interaction, dialogue and fusion of ambient and self-produced sounds. In Posaunen (2001), an interactive work for flute and computer, sounds with a closed embouchure are played on the flute and confronted with samples of distorted flute sounds. Depending on the speed of the movements made by the soloist, a number of these samples are manipulated (time-stretching, pitch-stretching, granular synthesis…) and played back. At the beginning there is a “dialogue” between soloist and computer, but as the work progresses, the soloist is plunged ever further into a veritable sound bath. In Contradicting soundscapes (2003), De Baerdemacker creates a soundscape from both samples and self-produced chamber music: an intersection at rush-hour is set diametrically opposite the tooting of instrumental music. The systemless and intuitive search for sound/soundscapes brings De Baerdemacker back to soundscapes that always refer to scenes from nature. In Scratch (2000), the speed of a 45 rpm record of bird sounds accompanied by commentary in French is varied by hand and occasionally “scratched”. The sometimes very low speed of the turntable and the poor quality of the record make the original sounds unrecognisable. The voice of the commentary sounds like deep growling and roaring, the bird sounds are like a fierce wind storm somewhere in the middle of a desolate landscape. In Splash (1999), too, a stormy atmosphere is created by combining the sounds of a gong with a rainmaker. After the release of the storm with distorted sounds of water, quiet returns with the sounding of the gong, the soft rustling of the rainmaker and the subsiding sounds of water. The opposite is also possible, as De Baerdemacker distorts concrete sounds to create a surrealist soundscape. XplosiV (1999) booms and a crashes. The title refers to the composition technique, as ten manipulated p-sounds (plosives) are combined into a blanket of sound, which during the work is placed in distorted form – through “time-stretching” – in opposition to a number of motifs consisting of short unrecognisable sounds of a bass drum, a bamboo cane and a metal tube. Then there are the compositions for tape with electronically generated sounds, in which the composer/“sound-engineer” has complete control over the compositional process and the final result. Monotone #1 (2000), for instance, starts from a sine tone whose amplitude is modulated by a Low Frequency Oscillator. The superimposition of the modulated sine tone, albeit with short time intervals, produces beats that can then be considered as rhythm. The composition ends with several high, discrete notes which as it were arise out of the beats of the continuous tones as they die out. 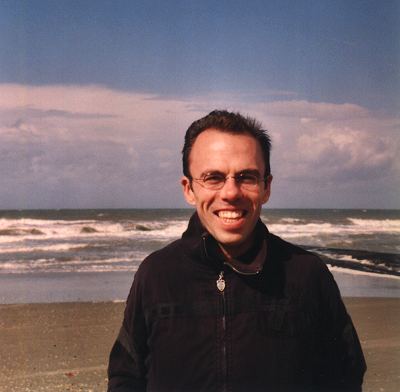