Alain Craens was born on 14 May 1957 in Kapellen. He showed a predilection for music early on, and took his higher secondary education at the Arts High School in Antwerp. He later continued his studies at the Royal Flemish Conservatory in the same city. There he studied oboe, English horn, chamber music, analysis and form (with August Verbesselt), as well as harmony and composition (with Willem Kersters). He earned his diplomas in fugue and counterpoint with Rafaël D’Haene at the Brussels Royal Conservatory. Craens is now himself on staff as a composition teacher at the Antwerp Conservatory, giving classes in harmony, counterpoint and fugue. He is also the artistic director of the Conservatory. As a performer, he was the oboe solo for seven years with the orchestra of the Flemish Chamber Opera, and also with the Flemish chamber orchestra, with which he has played numerous concerts both in Belgium and abroad. He has composed many works for this chamber orchestra. He has received further commissions from the Flanders Festival, the Beethoven Academie and the Royal Philharmonic Orchestra of Flanders. In 1985, his composition Divertimento for oboe, clarinet and bassoon won the Albert de Vleeshouwer Prize. The two piano compositions, Zoals het klokje thuis tikt (As the Clock Ticks at Home) and Valkenjacht (Falcon Hunting) each won the Cantabile Prize for composition (respectively in 1989 and 1991). In 1991, he also wrote the obligatory work for brass instruments and piano for the Pro Civitate National Music Competition.

The music of Alain Craens is difficult to categorise, being sometimes tonal and sometimes atonal or “freely tonal”. His music often shows characteristics of impressionism, minimal music or jazz. It is above all intended to be accessible. After the complexities of modernism, in which experimentation took the central place, Craens believes that it is time to rebuild to a normal relationship with the public.

Music should be allowed simply to be “beautiful” again, without all kinds of innovative ulterior motives. In order to achieve this, he has returned to the traditional triad which, however, he does not approach functionally or tonally. One sometimes has the impression that certain tonalities or tonal centres are suggested, but this is not Craens’ intention: he works with coincidental, consonant encounters between sounds and sets out to work towards points of support. In this way, he means to build a bridge between his own individual expression and the audience. His training as an oboist has inspired Craens to write a great deal of chamber-music works in which his own instrument plays a central role. His first important work is the Divertimento for oboe, clarinet and bassoon, written in 1985. Craens often later transcribes his works for a different scoring; here, for example, a later version is for clarinet, basset horn and bass clarinet. The composition has a very classical structure (fast-slow-fast) and uses various motifs that are to be repeated and developed. The two main motifs consist of two intervals (a minor second and a major third) which appear in different forms. Two important characteristics of Craens’ compositions are evident here. The first of these is his talent for writing beautiful, lyrical melodies such as are heard in the slow second movement of this work. The second is the use of the kind of complex rhythms found in the quicker outer movements, a technique found in many of his allegro movements. Both of these characteristics are also found in the Kindersuite voor strijkers (Children’s Suite for Strings), which Craens wrote in 1992 in a commission for the Flemish Chamber Orchestra. The work consists of two movements. In the first movement, Kinderspel (Child’s Play), the composer conjures up the ever-changing world of the child by employing a simple binary metre, highlighted with contrasts through the use of syncopations and unexpected accents. This movement is linked to the next, Droom (Dream), which is characterised by a simple, lyrical melody. The motifs in this movement are supported by a simple four-note ostinato. Despite the great melodic simplicity, Craens achieves a wide range of colours in this work by combining different string-playing techniques, such as pizzicato and harmonics.

Craens’ predilection for contrasts is again evident in Interlude to the Sea for oboe, bassoon and piano, a composition commissioned by the Flanders Festival in 1994. The work begins slowly and melodiously with rippling triplet motifs in the piano, a clear reference to the title of the work. In this slow passage, the freely worked-out dialogue between the oboe and the bassoon is placed in the foreground. Soon enough, however, this gives way to rhythmic accents and quicker movement, complemented by jazzy rhythms in the piano. At the climax of the work, the oboe, bassoon and piano play homorhythmically in short, repeated and accentuated rhythms. After this climax, the final section of the work, once again slower, is announced by a broad rallentando. As already noted, Craens’ career as an oboist led to the creation of a number of chamber-music works featuring his instrument. He does, however, show an interest in the other wind instruments, to which he often gives solo roles in his orchestral works. An example of this can be heard in his Dream for chamber orchestra. The work begins with a three-minute flute solo, in which the material for the rest of the work is presented. The work has an impressionistic quality, partly through the individual treatment of the wind instruments. Only in the quick movements do they play together, sometimes accompanied by strings. Another example is November Music, a concerto for flute, harp and orchestra. The source of inspiration for this concerto was the birth of the composer’s youngest daughter. The letters of her name symbolically provide the three main notes (a-flat – c – d) which function as the building blocks of the composition. The concerto consists of two contrasting movements. In the first movement, which is built on melody, the dialogue between the flute and the harp is central. In contrast to the second movement, in which rhythm is the driving force, the first movement is not highly metrical. 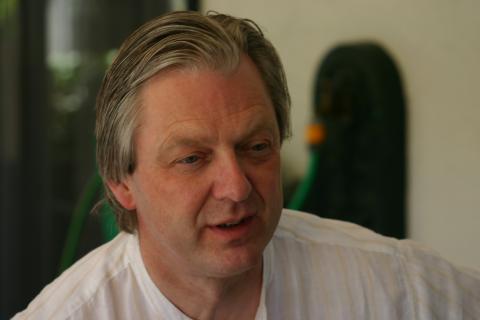