Joris Blanckaert was born in Lokeren on January 14, 1976. After studying to become a civil engineer with specializations in probabilistic methods and risk analysis, Blanckaert enrolled at the Royal Conservatory of Ghent in 2005. He studied jazz accordion with Rony Verbiest and earned a master’s degree in contemporary composition with Frank Nuyts (2011).

In addition to various collaborative projects with ensembles such as Symfonieorkest Vlaanderen, Spectra Ensemble, Emanon, Maeterlinck Quartet, Arsis4 and various soloists, Blanckaert was affiliated with the popular music ensembles bOOmfanfare (2001-2015) and bal des boiteux (2001-2008), with which he released a number of albums. Since 2008, he has been the artistic director of the artists’ collective Muzi a Zeny, where he has collaborated with soprano Elise Caluwaerts, cellist Benjamin Glorieux, choreographer NelleHens and playwright Wannes Gyselinck, among others. In 2009, Blanckaert began conducting research into the real-time interaction between soloist, computer and audience, based on spectral theory and statistics, with the support of the nOna arts center. Another research project on eye-ear coordination in collaboration with choreographer/dancer Nelle Hens resulted in performances under the title My Body, My Instrument.

Collaboration with other artists and musicians is central to Joris Blanckaert’s work. For example, the chamber opera “The Wandering Womb” and the lecture-performance “Tips & Tricks” were created in close collaboration with Wannes Gyselinck. In 2015, Blanckaert received the Provincial Prize for music from the province of East Flanders for his opera elle est moi und töte mich. In 2019, the performance are we not drawn onward to new era won the Edinburgh Fringe First Award. From 2016 to 2020, he was composer in residence at De Bijloke.

Despite an already impressive works list, Joris Blanckaert’s oeuvre is still constantly being developed. While his early work seems to focus on writing for smaller ensembles, his recent output has been characterized by a greater diversity of ensemble size and instrumentation and by non-conventional forms of performance. Nevertheless, some constants can be identified throughout his oeuvre, such as the frequent presence of musical humor. For example, Blanckaert concluded a concert program based on Gioacchino Rossini’s Il barbiere di Siviglia with Tournedos Final (2012), for which he not only set the tournedos Rossini recipe to music, but in which the audience playfully gets scolded and chased away with the help of an excerpt of text from Rossini’s opera.

Blanckaert’s education and work as a civil engineer left a clear mark on his work as a composer. “As an engineer, I learned to solve new problems and to always be a solution-oriented thinker.” Mathematical techniques are a means to this end, but not an end in themselves. Blanckaert approaches compositional techniques in the same pragmatic way. A focus on innovation is central to his musical output. For example, Kinetic Score (2012) is a composition that has never been played and will never be played: it is a composition that is danced. During the performance of this work, the score is presented visually on a 30-meter-long banner. A dancer then moves along the banner like a cursor and interprets the score physically.

In his compositions, Blanckaert focuses on innovation, but also on association. An example of this is the work Antiphonal Traces of the Old City (2012), which he was commissioned to write for the TRACK festival as a composition based on the Machariuswijk in Ghent. In contrast to the barren plains and dilapidated industrial buildings that can be found there today, the site was formerly a wetland area. A bird that happened to be there triggered Blanckaert’s compositional fantasy, resulting in a composition based on bird sounds, which in turn prompts the listener to reflect critically on the impact of urban development on our habitat.

Blanckaert has also continually embraced influences from folk culture throughout his artistic output, a likely result of his predilection for the works of Benjamin Britten and Igor Stravinsky. These folk elements typically surface unconsciously in the rhythms of his compositions, or consciously in the form of quotations. “My music is probably just the sum of what I’ve already heard, plus my own background.”

A constant in Blanckaert’s work is his use of the human voice, both in solo works (NOspeech, C-Quintet) and in ensemble, and of course in the context of various operas and musical theater compositions. One of his most remarkable realizations in this respect is City of EAR, a large-scale work that was the closing piece of the renowned Odegand festival in 2019. In this composition, various aspects of Blanckaert’s work come together: composing for the human voice, a connection with the societal context, and a (politically) critical view of the world. The composition was performed by 25 choirs spread across a significant part of the historic center of the city of Ghent, thus altering the noise of a modern city. The participation of hundreds of (amateur) singers, and the work’s critical attitude towards contemporary urban life are important elements in Blanckaert’s recent oeuvre, which, incidentally, does not shy away from interfering in the public debate on current topics, even outside of his music.

String quartet: K-Quartet (2011) in two movements, with optional illustrations by Annemieke Elst; Kinetic Score (2012) with choreography for the human body. 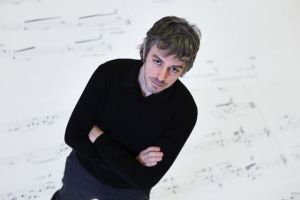