The career of Peter Vermeersch, born in 1959, has not followed the accustomed paths of classical music. He was educated as an architect but ultimately chose the life of a musician-composer. During and after his studies he played clarinet and saxophone in the group Union, which gave performances and played music. In the early 1980s, Union came into contact with the theatre group Radeis and provided the musical support for Echafaudages. Josse De Pauw (from Radeis) put Vermeersch into contact with the film-maker Thierry De Mey who, himself a budding composer, stimulated Vermeersch to start writing music. A crucial point in Vermeersch’s development was Rosas danst Rosas, the first dance production made by Anne Teresa De Keersmaeker in 1983 for the Théâtre Royal de la Monnaie in Brussels. This production would provide a forum for a number of musician-composers, such as Walter Hus (1959), Thierry De Mey (1956) and Eric Sleichim (the stage-name for Eric Michiels) (1958). Together they formed the group, Maximalist! in 1984, which aimed to connect with more popular genres, partly through their concert attire (preferably black, typical for subcultures at the time) and their energy on stage. The music they played was also not immediately classifiable, either as classical or as pop. In 1988, Maximalist! ceased operations and Vermeersch set up X-Legged Sally. A first CD recording was realised under Bill Lasswel and was recorded in New York for the avant-garde label, The Knitting Factory. Various other CD recordings followed, a number of which where linked to ballet productions by Wim Vandekeybus (including Killed by Charity, Slowup, Fired and Bereft of a Blissful Union). This music can best be described as pop music, varying from rock through funk, jazz and metal to full-blown oompah music. At first the numbers were purely instrumental, with vocals added only in later works (starting from The Land of the Giant Dwarfs). At this time, Vermeersch also produced music for theatre productions (with Walpurgis, Kaaitheater, De Roovers). This music tended to fall into more recognisable contemporary classical genres. After X-Legged Sally disbanded at the beginning of 1997, Vermeersch started two new groups. A Group is a small ensemble which aims to perform good rock numbers with suggestive texts. This group stopped existing in 1999. The larger Flat Earth Society is a big band that plays both music of the 1930s and arrangements of X-Legged Sally numbers. Finally, it should also be mentioned that Peter Vermeersch, together with Pierre Vervloesem, has also won his spurs as a music producer, working with such groups as dEUS, Mad dog loose, Nancy, Think of one, and L Santo.

Vermeersch’s work can be closely linked to popular genres and is allied to the “New Simplicity” (as represented, for example, by Michael Nyman), a style dubbed “Nieuwe Eenvoud” in Flanders (see Nieuwe Muziek in Vlaanderen). Under this heading falls the music that took a freer approach to the originally highly rigorous repetitive and minimal music from the United States. Maximalist! fits completely into this context. In terms of the sound production, the musicians made a clear choice for electric amplification. In this they set out from a very limited amount of sound material (a few motifs, chords or riffs) which they then manipulated further (the substitution of pitches, palindromes, hocket rhythms, permutations…). The result was reminiscent of the music of John Adams or Steve Reich.

The music of X-Legged Sally was of a different order. This music grew from a basic concept drawing on the mutual interaction between the musicians on the one hand, and the interaction between the musicians and the dancers on the other. The scores usually only indicate this basic concept and are thus not 100% representative of the musical result. In Down at the Dinghy, the bass consists of a simple two-bar ostinato above which three voices move contrapuntally. These voices are fairly simple and not determined by a tonal centre. A pattern of a total of fourteen bars is repeated by various forces, followed by a short coda. In practice, the repetitions are varied in function of the choreography, with their number varying from performance to performance. The work grew and deepened in the course of the ballet’s run.

Memphis, from the same period, is based on a mix of c-minor, -harmonic and -melodic scales. A short introduction in the bass provides the sound material and the syncopated rhythm. The four other voices then enter with a homophonic melody, which in the following repetition is presented somewhat more extensively in the keyboard. Small variations in these five parts then gradually appear, and a smaller, independent fragment begins to grow between the repetitions, characterised by an unsyncopated rhythm (triplets and sixteenths); this fragment then grows further until the work’s conclusion. There is thus a good deal of varied repetition here as well. The instrumentation consists of classical (wind) instruments with keyboard, all of which is amplified.

The Wegenerkwartet (for clarinet, violin, viola and cello) from Immer das Selbe gelogen, consists of twelve blocks, which are acoustically clearly distinct from one another. Each block is characterised by its own tempo, manner of playing, motif, character, and so on. The whole is less repetitive than Memphis or Down at the Dinghy, as the motifs change much more rapidly (through lengthening or shortening). On the other hand, the basic material is much more limited. Thus the second block sets out from four notes (c – g – a-flat – d-flat) with the centre of gravity on the perfect fifth (c – g). A few extra notes appear briefly (g-flat – e-flat – e), accompanied by doubled fifths (c+g, g+d). The two other strings enter a beat later and perform exact copies of this (deviating only at the conclusion).

In more recent works by A Group, more is done with samples that replace Vermeersch’s own clarinet playing. The music reveals an extreme eclecticism. For example, Woggy-Doggy is a song in which Zappa can be heard among The Beatles, Talking Heads, Led Zeppelin, Tuxedomoon and Medieval folk-music. Zappa is indeed frequently a source of inspiration for Vermeersch; it was thus not surprising to find the composer at a Zappa tribute concert in Antwerp in 1995.

Vermeersch’s most recent works for music-theatre, such as Hagel (from Charms) and Marche des Lames (from LARF), exhibit the same basic characteristic: limited material (one motif, one rhythm) with directly varied repetitions (adding or leaving out notes, extending a rhythmic motif); this is in contrast to his early period in which the repeated blocks were larger and differed more among themselves. The instrumentation, too, is now more extensive than in the beginning, allowing the (unconventional) orchestra to be divided into different subgroups, thus creating different sound-fields. One constant is the freedom enjoyed by the musicians; this is clear from the improvisatory sections and from the possibility of changing the basic concept as the musicians become more familiar with the material. 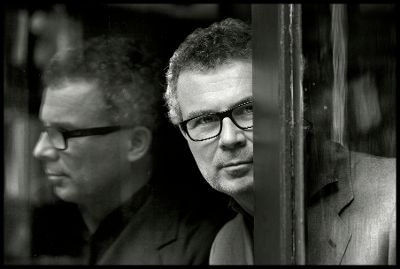