Jan Van Landeghem was born in Temse in 1954. He began his musical studies at the City Music Academy of Sint-Niklaas. He subsequently attended the conservatories of Brussels and Maastricht, earning first prizes in composition (magna cum laude) under Peter Cabus and André Laporte in Brussels and a solo diploma in organ under Kamiel D’hooghe in Maastricht. He attended courses in improvisation, organ, composition, and choral and orchestral conduction in France (with Iannis Xenakis, among others), Germany and the Netherlands. He was also regularly in contact with Karel Goeyvaerts in the last years of that composer’s life. Van Landeghem has appeared as a performer in most European countries, in the Far East and in the United States. He has recorded for both the Belgian and Dutch Radio. Selected as Fulbright Scholar for Belgium in 1985, he taught and performed at Georgia State University and at the University of Krakow (Poland). As conductor of the In Dulci Jubilo boys choir he has conducted concerts throughout Europe. He subsequently became conductor of the Concinentes chamber choir. At present he is director of the Music Academy in Bornem and teaches notation and composition at the Royal Music Conservatory in Brussels.

Jan Van Landeghem has won first prize in a number of composition competitions, including the national competition Wendungen of the Flanders Festival, for his work Epitaffio for Symphony Orchestra (1993) and the international Prize for Contemporary Music Flanders-Québec 1995 in Montreal for his string quartet Silent Scream. In 2000 he was chosen Composer of the Year 2000 at the Ramsgate Spring Festival for his piano quartet Marcatissimo.

Jan Van Landeghem’s repertoire is highly diverse in nature. His awareness of being influenced by numerous styles and factors has led to the creation of an interpreted polystylistic compositional style. Striking in this connection is that this diversity involves both the extra-musical elements of his music and the musical material itself. In his compositions, Van Landeghem often takes as his point of departure an extra-musical factor, which then serves more as a source of inspiration than as an actual programme. For this he chooses from a broad spectrum of images and themes. For instance, the string quartet Silent Scream (1991) explores the idea that during an abortion the foetus actually screams silently. This scream is musically reproduced by the sul ponticello writing style. The second movement of the string quartet, in contrast, starts from the choice for life, making use of quotations from Wagner’s Siegfried-Idylle. He has also written Jobutsu (1996), a composition for one recorder player and crotales, in which he alludes to the atmosphere in Japanese Buddhist temples and the perfection that the player of the shakuhachi (Japanese bamboo flute) achieves in Zen meditation.

This very great variation is found not only in the images evoked, but also in the techniques used. For his music, Jan Van Landeghem draws his inspiration from every imaginable domain of music history and from a wide spectrum of technical possibilities. He successfully makes a coherent synthesis of the most diverse styles and techniques. A good example of this is his Game I for solo organ (1988). In this work he combines sound clusters which vary from one end of the sound field to the other, with the Gregorian chant Salve Regina as cantus firmus in the pedal. Originally the two elements appear next to one another, while later in the composition they are superimposed.

Another illustration of this composer’s eclectic style is found in Pastorale Notturno for Clarinet and Organ (1995), a work that deals with the Christmas story. In the first movement, Introduzione notturna, Mary and Joseph’s feelings of fear and uncertainty are expressed, partly through a number of aleatory elements and through the use of multiphonics. In the second movement, Musette, Van Landeghem imitates the musette both as a folk dance and as one of the names of the French bagpipe. The drone effect (a held, open fifth) is found in the left hand of the organ, while the clarinet and the right hand of the organ imitate the bagpipe player. The third movement of the work, Pastorella, then serves as a climax to the whole composition, since here the elements of the previous movements are combined with several Old Flemish Christmas songs. A last example is the recent work Thamosoo ma jyotir gamaya for solo organ (1999), based on the text of the Indian sage Sri Sathya Sai Baba. The most important ingredients of this work are a twelve-tone set, a Bach chorale (the first few times it is transformed, with only one complete line, “Christ du bist der helle Tag”, appearing at the end in its original form) and a set comprised of e-flat, a, b, b-flat, a, b-flat, a (referring to the name Sai Baba, using the Germanic system of note names: Es-A-H B-A-B-A). The whole is then fit into a roughly symmetrical form. The basic idea of the composition is one of openness to and tolerance of other religions. This eclecticism is closely related to the view held by Van Landeghem (and so many other composers of his generation) in connection with the function of the composer and his music in our society. Above all, the composers of his generation, making use of their eclectic techniques, set out to express the universality of the central questions, seeking to engage themselves socially (a typically modernist idea, even though the atmosphere of the works is often postmodern) by using their position as artists to go in search of all manner of ideals which can offer alternatives for the many extremist movements in our society. 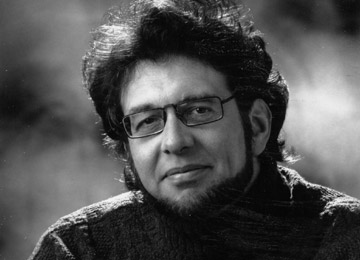