Maarten Van Ingelgem (°1976) studied piano with Jan Michiels at the Royal Conservatory of Brussels and composition with Wim Henderickx at the Royal Flemish Conservatory of Antwerp. He leads the composition class at the academy of Dilbeek, where he is also a piano teacher. Maarten is the conductor of De 2de Adem, a chamber choir in Ghent specializing in contemporary music, and he sings with Aquarius, which also focuses on contemporary vocal music.

As a composer, he has written about sixty compositions ranging from solo works and string quartets to a chamber opera and a piano concerto. For this piano concerto, he received the 2005 Prize for New Music from the province of East Flanders. In 2008, Sabam awarded him the Gouden Klaproos (“Golden Poppy”) award for choir composition, and in 2012 and 2014, he was a laureate of the European Award for Choral Composers. Maarten is the artistic director of the 2020 World Choir Games, the largest choir competition in the world that is being organized in Flanders for its eleventh edition.

Maarten Van Ingelgem has composed works for many different combinations of instruments and voices. His interactions with young people and amateurs are important to his work, which is evident in how he takes into account the perception of the listener and the technical feasibility of the piece. Several composers have also had a strong influence on him. Van Ingelgem’s work will be discussed from this angle.

For example, Kurtág’s influence can be seen in Van Ingelgem’s activity as a teacher. Consider his work for piano, Asa giri Ya (2004). This work portrays the atmosphere and impressions that are evoked by the eponymous (Japanese) haiku. Van Ingelgem constructs this work using simple procedures and raw materials. To depict the dark morning haze, he only uses the lower registers of the keyboard, creating what seems to be an impenetrable haze of sound. To make this haze truly impenetrable, the sustain pedal is kept pressed throughout the piece. However, the haze of sound is moving and constantly changing in density and timbre. Shapes seem to materialize: ghosts appear, but they quickly fade into the background (men go their ways). This composition is a good example of playing with timbre. On the piano, this might not seem obvious, but you can still play with sound colors, for example, by combining the continuously pressed sustain pedal with the una corda pedal; moreover, you can achieve a wide range of sound color by playing with extreme dynamics: gigantic crescendos (with e.g. a metallic sound and even string vibrations as a result) and sudden inaudible pianissimos that, in contrast to the grand outbursts, have an almost string-like effect.

Van Ingelgem also plays with various sound colors in Meditatio for organ (2003). The work begins with two major seconds. Working with major seconds is a technique that he previously employed in some of his earlier works and it remains a constant in his oeuvre. In Meditatio, we can see an evolution from pentatonic to chromatic. The sound is gradually shifted and disturbed, namely by the performer very slowly, yet evenly pulling the organ stops in and out. This causes an uncontrolled circulation of air in the organ pipes, which, as a result, can lead to unexpected sounds. Van Ingelgem also worked with sound colors in his earliest compositions, but mainly in an impressionistic way (c.f. Debussy), such as in Leireken (1998) in which he uses a seventh chord without a fifth.

While Van Ingelgem experiments with chord colors in Leireken, he employs extreme sound colors in Silex (2003). In this work for violin, viola, or cello, he uses contemporary playing techniques (such as left-hand pizzicato, pressione d’arco, knocking on the wood, etc.). Here, Van Ingelgem uses spatial notation. In this regard, one must mention the influence of Scelsi. Scelsi’s Quattro pezzi su una memo sola became a counterpart to Van Ingelgem’s experimentation with sound shifts and to his use of very few notes in a work. In Quattro pezzi su una memo sola, Scelsi is always searching for sound shifts from one sound color to another. One of the first blueprints of this influence in Van Ingelgem’s work can be seen in Gen (2002). Starting from nothing, a crescendo for twenty seconds grows to pppp. An example of this can also be found in Laokoön (2003): here, Van Ingelgem uses mini glissandos and micro intervals.

The influences of Kurtág and Scelsi are also evident in EGO (2002). The clusters and free rhythm refer to Kurtág, just like the graphic score and free notation, while the color shifts in that work are reminiscent of Scelsi. The meter is free, but strongly depends on the soprano’s breathing. The sounds of the word “I” in seven different languages are pulled apart and then merged together again randomly, thus highlighting the shifts in sound.

Another important source of inspiration for Van Ingelgem is Messiaen, in particular his third mode. In Verboden Vrucht (2001), he uses Messiaen’s second and third mode. During his studies in composition, Van Ingelgem searched for a stylistic idiom by modeling his writing after the sound worlds that were closest to his own personal preferences. As a result, he also dared to work with spectral elements. He discovered that when one note is removed from Messiaen’s third mode, the first eight notes of the overtone series (spectrum) remain. Thus, by way of the overtone series and Messiaen’s third mode, it is not difficult to shift from one spectrum to another. This is also present in Gen (2002).

The four influences (Kurtág, Scelsi, Messiaen, and spectralism) come together nicely in Laokoön (2003). The graphic score of Laokoön is arranged on a timeline, separate from the traditional metric and rhythmic notation. The work is completely in 4/4 and the time signature provides a framework for Van Ingelgem to freely write his composition (cf. Ligeti). In EGO (2002), Meditatio (2003) and Berienza (2003), he uses a spatial notation.

Van Ingelgem’s Piano Concerto (2005) can be considered a synthesis of his earlier ideas and styles. Timbre plays an important role, although the rhythm also has more influence in this work than in his other works. The drive that was less important in his earlier works now becomes an essential part of the typical virtuosity that characterizes a concerto. Van Ingelgem takes the piano as his starting point, with the orchestra providing the coloring for the piano. The virtuosity and pianistic character of the work are notable. The conspicuous clusters are a reference to Kurtág. In terms of form, this piano concerto is based on the classical three-movement concerto structure. However, each movement goes directly on to the next, and there is a mutual exchange of compositional material. Partly due to its relatively short duration of thirteen minutes, this work has become a statement about the piano concerto as a genre.

Since the 2000s, choral music has become increasingly important in Van Ingelgem’s oeuvre. Here, too, he does not shy away from references to the big names in music history. In Rakvere (2016), at the request of the vocal ensemble Aquarius, he set text by Peter Theunynck to music about Arvo Pärt. The text describes how a boy (Arvo Pärt) cycles through the snow with his bicycle. The use of a bicycle bell at the start of the composition and the use of other sound effects are both humorous and expressive. For the choir, Van Ingelgem uses softly dissonant writing, which refers to Pärt’s style without being a parody of it.

Van Ingelgem also does not shy away from larger projects, often in collaboration with amateur musicians. In the oratorio Onvoltooid Landschap, which is more than an hour long, he combines a large choir with saxophone quartet, percussion, and narrator. The combination of folk songs, newly composed music, African percussion, and modern techniques makes this performance kaleidoscopic as a whole. The composition was written to commemorate World War I. 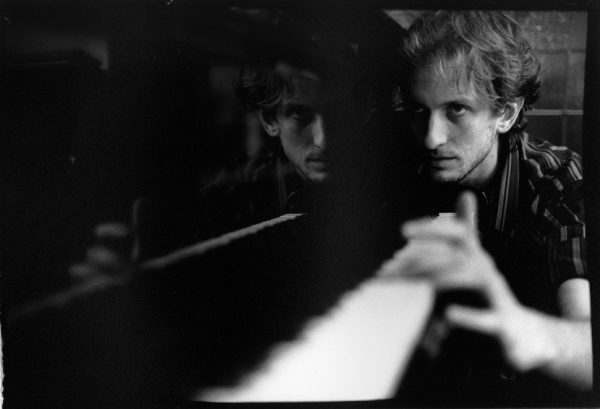