Kristiaan Van Ingelgem was born in Sint-Gillis (Dendermonde) on 9 June 1944. His talent for the keyboard, nurtured at home and developed at school by Rev. Marcel Weemaes, led to post-secondary studies in music at the Lemmens Institue in Mechelen and Leuven. There he won the Lemmens-Tinel prize for organ under Kamiel D’Hooghe in 1969. In 1972 he earned a diploma as Performing Musician in Organ and Improvisation at the Maastricht Conservatory. In 2004 he graduated from the Jef Denyn Royal Carillon School in Mechelen as a certified carilloneur. Since 1999 he has been the city carilloneur of Aalst, a position he had previously held from 1972 to 1977.

His experience with the carillon started with studies at the Mechelen carillon school, where he taught practical harmony from 1969 to 1974. He now teaches that subject, as well as an improvisation course (organ and piano) at the Royal Conservatory in Antwerp. He is also the organist at St Martin’s Church in Aalst and an organ teacher at the municipal academy in Etterbeek. Kristiaan Van Ingelgem plays both as a soloist and in ensembles. Flemish and French composers hold a prominent place in his repertoire, and as an organist he is known as a talented improviser. His collaborations with ensembles, orchestras and choirs, often made up of young musicians (including Cantate Domino Aalst, Camerata Aetas Nova Leuven and De tweede adem, conducted by his son Maarten), have kept him abreast of the latest tendencies in music-making. His instrumental, orchestral and especially vocal work is often the result of a specific invitation from the music world or a commission by an organisation.

Van Ingelgem’s feel for today’s concert world is kept active by the stimulating proximity of his talented family. He has passed on his love of music, which he says he inherited from his father, to his own children Maarten (piano, organ and choir), Pieter (piano and organ) and Tineke (solo song, flute, piano and organ). The family frequently plays together in various formations, often the occasion for specific compositions.

The key to Kristiaan Van Ingelgem’s oeuvre, style and compositional technique has been his musical experiences as an improviser, carilloneur and choral accompanist. Much of his compositional output has been the direct result of a specific concert, project or competition.

As an improviser, Van Ingelgem sets out to correct the romantic image of the apparently artlessly revelling virtuoso. In Van Ingelgem’s hands, an improvisation is always meticulously prepared, with attention to acoustics, audience, musical themes and conceptual coherence, style, timbre and the opportunities offered by the type of organ. Like his improvisations, his compositional style is clearly marked by French Romantic and modern organ literature (Franck, Vierne, Widor, Duruflé, Dupré, Messiaen) and its reception and assimilation in Flanders (Lemmens, Tinel, Peeters, Roelstraete). His vocal music, like that of many other Lemmens Institute alumni of his generation, shows the influence of Jef Van Nuffel, and especially that composer’s sense of dramatic development, ripe colours and a strong feeling for choral delivery. Van Ingelgem has less affinity with the high complexity of the German tradition. The stringent dodecaphonic discourse of the Fantasia and Fugue (part of the work for which he won the Lemmens-Tinel prize in 1969), with its uncontrived finesse, is nonetheless often very convincing. He continued this trend in a number of sketches for piano. During his advanced studies in Maastricht, his intense studies of Messiaen’s La Nativité du Seigneur and Messe de la Pentecôte won him over to modern modality. Since that time he has worked chiefly with the octotonic scale.

Two as yet incomplete and unnamed organ cycles, started respectively in 1987 and 1990, explore 2 true characteristics of the church organ: the meditative and the concertante. The first cycle, for which 3 movements are planned, are concentrated on Gregorian Chant, similar to the way the French symphonic organ tradition deals with this repertoire. In the mainly recitative Jesu dulcis memoriae, Van Ingelgem makes clear his predilection for dissonances; or more specifically, his pleasure in arriving at new solutions to them. The very organistic Te ante lucis terminum handles the borrowed material much more freely: the parallel intervals and solo turns of phrase are at times reminiscent of Jean Langlais. In the second cycle, 2 of the 4 planned Impressions have already been completed. A feeling of symphonic allure and a flexible handling of the thematic material make of the first of these works a full-blooded concert work; in the second, an intriguing 5-note motif, dealt with in a quasi-improvisatory way, takes us into the playful world of Jehan Alain.

The composer’s choice of a modal idiom is without a doubt also drawn from the sound-world of the carillon. The 8-note scale opens the possibility of a sonorous interplay of overtones, a decisive factor for outdoor instruments. Carillon works from his years teaching in Mechelen are now held in the school’s archives. After the Carillon Suite, for which he won the Jef Denyn Competition in 1975, his fame as a carillon composer grew markedly. Not only has a growing insight into the instrument manifested itself since then, as in Sonant, written in 2004 for his final diploma in carillon playing; each work also has a mischievous and vital quality, as in Sprookje op de naam Fabiola (Fairy tale on the name Fabiola), the compulsory work for the fourth International Queen Fabiola Carillon Competition in Mechelen in 1998.

In his orchestral works as well, Kristiaan Van Ingelgem takes the inherent thematic potential as his concrete compositional point of departure. If the incidental music to Aristophanes’ comedy The Birds (De Vogels, 1985) and Passio Christi (1991) offered the composer ready-made referential frameworks, the purely orchestral Mijn Kapellekensbaan (My Chapel Road) is a manifestation of the composer’s personal musical and literary inventiveness. Written in 1999 for Youth and Music in Aalst, this work grew into a symphonic Hineininterpretierung of Louis-Paul Boon’s idiosyncratic novel.

That Van Ingelgem’s work is seldom the fruit of an abstract musical idea is proven by his choral compositions. They are almost always linked to a commission, invitation or occasion, ranging from the Youth Festival in Neerpelt to the Ijzerbedevaart (the annual manifestation of the Flemish Movement). The approach to text exhibits a penchant for polymetres and polyrhythms, imitative dialogue and homophonic declamation – tendencies also found in the work of his colleagues. Van Ingelgem occupies a fairly conservative place in the line of composers formed by Van Nuffel, Nees, Schroyens and Bikkembergs. He fully plays his role as intermediary between past and present in his double-choir Ave Maria (Opus 16, 1981). In this work, the well-known composition by Arcadelt enters into a dialogue with modern, partially-modal 4-voice writing. Also borrowed from the 16th century is the text of Lofzang op de Schepper (Ode to the Creator, Opus 60, 1990): without complexity, the alternation of fleet-footed polyphony with a narrative homophony full of open fifths and fourths conjures up the simple orators’ devotion of the Antwerp poet Cornelis Crul. In terms of its purport and concept, the evocative Psalm 150 (2002) tends to follow the trend set by his oft-performed Te Deum (1989). Composed for a Duruflé concert, the work for choir, baritone solo and symphony orchestra clearly bears the stamp of this friend (but not stylistic disciple) of Olivier Messiaen.

In sum, Kristiaan Van Ingelgem shows himself time and again to be a “thinking” and “wary” composer. “Thinking” in his search for a meaningful interaction between work and context, “wary” in his struggle against superficiality and exposure. All the same, in this process – and even in the updating of his musical language – one can hear the resolute refusal to repudiate the all-too easily forgotten tradition of Flemish choral, organ and carillon music, as well as the act of developing this tradition within the context of a highly evolved sound-world. 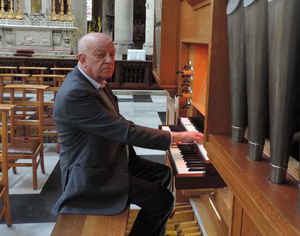