Jan Van der Roost was born on 1 March 1956 in Duffel. By listening to dozens of records and tapes in the family home he came into contact with many genres, including music for wind instruments. After his secondary school studies at St Gummarus College in Lier, he went on to study in the Conservatory and Music Education departments at the Lemmens Institute in Leuven, earning three degrees. Besides the Pedagogical Diploma, he received first prizes in solfège (with Lode Dieltiens), harmony (Frans Geysen), counterpoint (Jos Van Looy), trombone (François De Backer) and music history (Hugo Heughebaert). He completed his theoretical training at the Royal Conservatory in Ghent, with a first prize in fugue (Julien Mestdagh). He also earned first prizes in choral conducting (Roger Leens) and composition (Willem Kersters) at the Royal Conservatory in Antwerp. In 1983, Jan Van der Roost was named teacher of counterpoint and fugue at the Lemmens Institute. From 1991 he was also the conductor of the concert band at this institution. He has taught as guest professor at the Shobi Institute of Music in Tokyo and at the Nagoya University of the Arts. He has also been a guest teacher at music schools in Italy, Finland, the Netherlands, Austria, Canada, the United States, Brazil, Germany, Scotland, Luxemburg and Japan. Van der Roost is a frequent jury member, guest lecturer and guest conductor both in Belgium and abroad: his activities have taken him to 35 countries on 4 continents. Van der Roost has only infrequently taken part in composition competitions, although he has twice won prizes: in 1985 with Van Maan en Aarde (From Moon and Earth) for mixed choir (competition organised by the Antwerp Provincial government) and in 1987 for Excalibur for brass band (competition organised by the Flemish Brass Band Federation). Jan Van der Roost has composed more than 90 works to date. Since 1988, all his compositions have been commissioned. His music has been performed in some fifty countries and almost all his works have been recorded (for radio, television and/or CD).

Jan Van der Roost is mainly known as a composer of “hafabra” music (an acronym for “harmonie [concert band], fanfare, brass band”). His works for hafabra are generally more traditional and accessible than his symphonic works and his chamber music, which can be explained by the fact that most hafabra ensembles are generally made up of amateurs and are often geared to a different audience. This allowed Van der Roost to apply and develop a mostly tonal writing style. The more difficult works within this genre generally go a step further in the direction of “contemporary” musical styles.

Van der Roost’s music is often described as eclectic and has certainly been influenced by music with very different origins. In Per Archi for string orchestra (1983), for example, he pays homage to Britten and Bartok. The slow first movement is largely based on the pedal-note e. The violin solo juxtaposes against this an improvisatory melody, which leads to a lyrical section characterised by a quicker tempo and modal themes. The second movement surges ahead with a constantly rhythmic drive. After a short introduction there follows a rondo, the main theme of which undergoes a mutation and thus becomes the starting point for a fugue, which in turn is subjected to such contrapuntal techniques as inversion and stretto. Van der Roost is also an admirer of the music of Edward Elgar (1857-1934). For Ceremonial March (1984), he found inspiration in the best known works from Elgar’s oeuvre, the so very Elgarian Pomp and Circumstance Marches; Van der Roost’s March is, as it were, a sixth march in the series. Considering the great diversity in his compositions, it is difficult to name any other particular composers who have directly influenced his works.

Generally characteristic of Van der Roost’s oeuvre are the notions of “contrast” and “variation”, which operate on multiple levels. The contrast-principle is partly situated in the various influences and moods suggested by his compositions. For instance, the Concerto per Tromba (2001) is to a certain degree linked to the Baroque period, when the trumpet began to develop into a full-fledged solo instrument. The scoring (trumpet, harpsichord and string orchestra) is a direct illustration of this; equally, the use of the brilliant sounds of the piccolo trumpet has Baroque associations. Van der Roost has also worked several short quotes into this three-movement concerto, including fragments of works by Vivaldi, Bach and, in a later period, Hummel and Haydn. In Mozaïeken for symphony orchestra (1986), the energetic city life of Manhattan is musically represented. Van der Roost repeatedly refers to that most American of musical genres, jazz, through the use of rhythmic chord-blocks that give the work a somewhat jazzy undertone.

An examination of the various musical parameters shows that stylistically, too, Van der Roost’s oeuvre is characterised by a great diversity. In terms of scoring, hafabra music makes up half of his oeuvre, but he has also produced works for symphony orchestra, chamber music, solo works and vocal compositions, varying from a traditional scoring to, for example, a concert band with narrator or an oratorio for narrator, 2 soloists, choir, organ and brass band. Van der Roost’s melodies often betray a complete simplicity, sometimes folk-like in character and sometimes more chorale-like in their conception. The Hungarian national anthem is woven into Sinfonia Hungarica (2000), while Puszta (1987) includes melodies that, although newly-composed and thus not arrangements of existing dances, are nonetheless comparable in character to the Hungarian and Slavic dances by Brahms and Dvorak and also with the Hungarian rhapsodies by Liszt. On the other hand, the themes are sometimes subjected to fugal and canonic techniques, or based on a pentatonic formula. Themes with diverse characters are often employed, and cyclical links created between the different movements of a work. For example, Et in Terra Pax (1997) begins with a pentatonic theme, based on the notes d – e – g – a – c. A somewhat melancholy melody develops during an orchestral climax, leading to the first outpouring of sound. The words “Et in Terra Pax” round off the first section. A nervous Allegro follows but is suddenly interruped by a chorale-like passage. At the end of the composition, the clarinets and the English horn play the pentatonic opening theme one last time, in a broadened version. The works are also rhythmically very diverse, ranging from very simple rhythms to polyrhythmic figures, frequent changes of metre and shifting metrical accents. Equally, there is great variety on the harmonic level. Most of Van der Roost’s compositions have a free-tonal harmony, and yet in a number of the works modality is present under the surface, as in Concierto de Homenaje (1994). Excalibur (1987) is written in free atonality, with both consonant passages and bitonal or dissonant sections. Canti d’Amore, four songs for baritone and chamber orchestra (2000), is set in a partly contemporary, partly archaic sound idiom. The principle of contrast forms the explicit basis for In Contrasto Grosso for recorder quartet and string quartet (1997). The title refers to the contrasting dialogue between the two quartets, as in the Baroque concerto grosso, and also to the intrinsic contrast between the three different movements. The first movement is a “perpetuum mobile” of broken chords rhythmically developed in an imaginative way. The second movement, with its use of special techniques for the recorders (white noise, Flatterzunge) and the strings (con sordino, sul tasto, sul ponticello), has a more improvisational, unfocussed feel. The melodic basis is formed by only four notes (e – f – g – a or a – g – f – e). The finale is energetic and effervescent: quick, repeated notes in the strings drive the simple theme forwards. After a short chorale-like central movement with an aleatory “coda”, the work races to its conclusion with the same energy as at the beginning.

Many of Jan Van der Roosts’s works are to varying degrees based on a programmatic scheme. This can often be traced back to the fact that all his works are commissions. Metalla (1999), for instance, was written for the Kreisverband Altenkirchen in Germany. The region around Altenkirchen is known for its iron ore mines, an element that Van der Roost musically translates into the dark mood of the introduction together with layered sevenths, orchestral crescendos and the like. This is followed by terse figures in the brass and a babbling secundary motif meant to represent the river Sieg, an important element in the landscape around Altenkirchen. For his three largest brass-band compositions, Excalibur (1987), Stonehenge (1992) and Albion (2000-2001), Van der Roost found his inspiration in the British Middle Ages, expressed in several atmosphereic sequences and a story woven around King Arthur and his legendary Knights of the Round Table.

In certain works, Van der Roost pushed his normal boundaries, without as a result becoming an “innovator”. His objective is not to be “new” or “innovative” per se: he sees himself as a traditional composer who nonetheless strives to remain in contact with all that is taking place in the contemporary music world, without necessarily taking it all on board in his works. 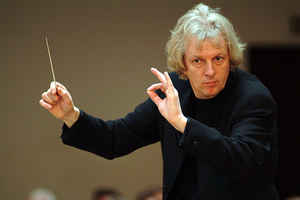