Bram Van Camp was born on 4 June 1980 in Wilrijk (Antwerp). He wrote his first compositions at the age of nine. He studied violin, piano and composition at the Music Academy of the Noorderkempen in Kalmthout, where he completed his violin studies summa cum laude. He continued his musical education at the Royal Flemish Conservatory in Antwerp (1998-2003), studying violin with Vegard Nilsen and Kees Koelmans, composition with Wim Henderickx and piano with Pascal Sigrist. In 2003, Van Camp earned his Meester in Muziek for violin, composition, counterpoint and fugue summa cum laude. He also received a final diploma in chamber music. He subsequently pursued studies in composition at the conservatory in Amsterdam in the classes of Wim Henderickx and Theo Loevendie. At the same time he also took lessons from Daan Manneke, Klaas de Vries and Fabio Nieder. Van Camp took part in masterclasses with, among others, Michael Finnissy and James Wood. He has received a number of prizes, including the Aquarius Composition Competition for Rhapsody for violin and orchestra (1999) and the BAP Prize (Belgian Artistic Promotion) from SABAM for Trio for clarinet, viola and piano (2002). Van Camp has worked on projects with numerous ensembles, including the Beethoven Academie, the Hermes Ensemble, the Syrinx Ensemble, the Kandinsky String Quartet and the Holland-based Nieuw Ensemble. Works by Van Camp have also been commissioned by deSingel, the Flanders Festival and Ars Musica. Besides his activities as a composer, he is also active as a violinist. In 2003 he was the soloist with the Ensemble for New Music of the Amsterdam conservatory, and premiered the Violin Concerto by Henrik Hellstenius at the ISCM Music Days in Ljubjana. At present he is preparing an orchestral work commissioned by deFilharmonie (Antwerp).

Bram Van Camp takes the auditive – his idea of how music should sound – as the starting point for his compositions. From this empirical approach he then works out a system that will give the music structure and form. This involves the use of different tonal systems, from modality with a strong sense of a tonal centre (Rhapsody) to free atonality (Trio, Etude), to dodecaphony (Ricercare, Sonata for violin and piano) to microtonality (273”, String Quartet). Important to this process is the notion of ‘evolution’. Van Camp attempts to make each composition new in relation to the preceding one. In most of his compositions he employs mathematical series and the golden section. It is crucial for Van Camp to be able to interpret and account for each musical parameter. This explains his predilection for recursive series such as the chaos series, Lucas series and Fibonacci series. And yet these series, like the whole concept of series, are only a compositional means and not an end in themselves.

Van Camp’s interest in the golden section developed when he noticed that his compositions intuitively worked to a climax about two thirds of the way through, thus according with the proportions of the golden section. In order to predetermine the form of his Ricercare, he consciously used the golden section, placing the climax at bar 41, exactly two thirds of the way through the 60-bar work. This dodecaphonic composition makes use of one theme that appears fugually throughout the composition, as the genre dictates. At the climax, the letters B-A-C-H appear as a theme played on the clarinet, Van Camp’s way of paying tribute to J.S. Bach. After this composition, Van Camp continued to pursue this interest in the golden section, applying it in, amongst other works, the Sonata for violin and piano. This work is divided into three movements: I. Invocazione, II. Scherzo and III. Adagio. Between these movements are sections respectively entitled Intermezzo and Apoteosi. In addition, the composition opens with an Introduzione and concludes with a coda. The relations and the positioning of the various sections is determined by the golden section. Apoteosi is thus the climax that takes place after the development in the Scherzo (movement II), at precisely 89/144 of the total timing of the composition. The composition is also determined by the Fibonacci series. As a result, movement I, Invocazione, only actually begins in bar 2: in order to represent the numbers 0 1 1 of the Fibonacci series, he inserted an Introduzione “senza misura”. At the first performance of this work, Van Camp’s final exam in violin at the Antwerp Conservatory, this composition was programmed together with Alban Berg’s Violin Concerto and J.S. Bach’s Third Sonata for solo violin. With his composition, Van Camp attempted to create a link between these two compositions. The work refers explicitly to Berg’s Violin Concerto: on the one hand, use is made of dodecaphony, which is applied in a Bergian way; on the other, he uses the Bach theme. Instead of the theme that Berg uses (Es ist Genug!), Van Camp uses the B-A-C-H theme from Die Kunst der Fuge for his Adagio. Although the form is predetermined and the rhythm and the accents are serially derived, the composition does not have a serial sound.

The golden section is again in evidence in Strata. The proportions are pre-compositionally applied in order to arrive at the form. It is here not only a question of the large-scale form, whereby the first movement progresses towards the golden-section climax of the composition, but also of the formal relationships within each movement. For example, in movement I the golden section is again applied and is then in turn subdivided into golden sections. This leads to an alternation between two themes, one marked grave, the other allegro. Both themes intensify as they reach their climaxes. In addition, the composition is constructed in such a way that the contrasting themes continue their course at an ongoing unconscious level, so that after the presentation of one theme the other takes over on cue, as if it had been continuing the whole time. The title refers to the Latin word for layers. In the first movement the various layers are juxtaposed. In the second movement the layers are superimposed. In this second movement, adagio, the first violin part is built up according to the Lucas series. Here the element of timbre assumes the central place. The Baroque violin plays a chorale with a Baroque bow, thus suggesting a work for three voices. The first (modern) violin plays a more improvisatory layer. Although the mathematical series produce the link between the composition’s two movements, they have only an abstract connection, not perceptible to the ear.

In Hidden Facts, Van Camp continued his fascination for layering. The composition consists of three movements, with allegro outer movements surrounding an adagio. Van Camp wrote for a scoring of five instruments (wind quintet), which again take up the idea of independent, evolved layers. Dozens of layers can be identified, although they are not all heard simultaneously because of the limited instrumentation and (occasionally) the limitations of playing technique. This composition revolves around various layers that can disappear for a time only to reappear later. As a result, the non-audible layers continue to be active while another layer is heard. The composition is based on different systems, but once again the formal structure and its subdivision is mainly determined by the golden section.

273” is essentially the continuation of Van Camp’s Sonata. It refers both to Cage (4’33” amounts to 273 seconds) and to Bartok, who in the Sonata for 2 pianos and percussion begins the recapitulation in the first movement at exactly 273 bars, the golden section. In this composition, every musical parameter is determined according to the proportion of the golden section. This makes 273” Van Camp’s most serial work. The tonal system and the system of pitch organisation are derived from the golden section. In this way, Van Camp lays bare his compositional system. He takes g-sharp1 as the pedal note for the work. From this point, the composition moves gradually to the c3 in the piccolo and the C3 in the double bass, at exactly the golden-section climax of the composition. Van Camp divides the six octaves between c3 and C3 into quarter tones, resulting in a total of 144 notes between the highest and the lowest notes in the composition. According to the mathematical relations in the Fibonacci series, 144 is easier to manipulate than 72 (the number of notes that would be arrived at according to a normal diatonic sequence). The work is thus microtonal. The metre and the rhythm are based on an alternation between 6/4 and 4/4 time signatures containing alternating quintuplets and triplets, also proportioned according to the golden section. As before, the time, tessitura and harmony are also serially determined. The composition consists of an introduction that evolves through a development to a climax. This is followed by a return to the material of the opening. The string quartet is also a microtonal composition. Here the experimental harmonies of 273” are taken as the point of departure. These chords are used in an intuitive way in the string quartet. The composition consists of three movements. The first is a slow introduction. The middle movement is tempestuous and evolves to the climax. In the third movement a mode is used. This mode is developed by charting all possible flageolets with scordatura. The hierarchy of the notes in the mode is determined by the golden section. In pure auditive terms this has a peaceful quality, as it consists of long-held tones. The technique of polyphonic layering is also applied in this composition. The work’s subtitle is a dedication to Beethoven (Dedicated to the memory of Ludwig van Beethoven). The layers are thematically dealt with and are developed like the themes in a Beethoven symphony. They evolve organically and influence one another, making it impossible to identify where a second theme begins. Once again, the entries of the layers are serially fixed, according to the golden-section principle.

Orchestra: Rapsodie for violin and orchestra (1999)

Bram Van Camp’s scores are protected by copyright at SABAM (Belgian Authors’ Union). They are to be obtained via the author at a small cost. Copying the scores is illegal. 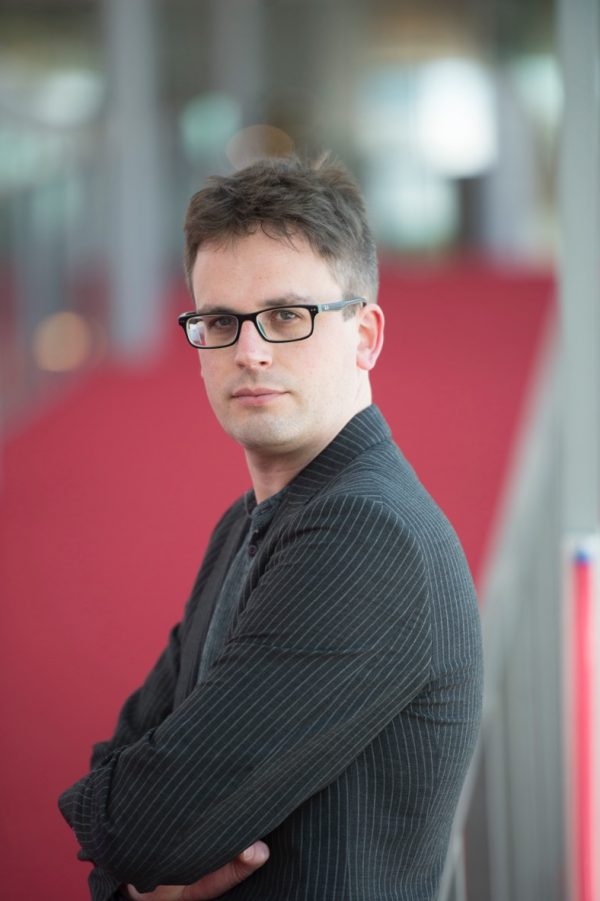