Martin Valcke was born in 1963 in Poperinge. He received his first music lessons from his father and went on to study solfège, cello and chamber music at the Municipal Music Academy in Ieper and the Municipal Conservatory in Bruges. He subsequently attended the Lemmens Institute in Leuven, where he graduated with a diploma (Laureaat) in cello and also earned first prizes in solfège, harmony, cello, practical harmony, counterpoint and fugue. He studied composition with Luc Van Hove and received his Master in Music diploma in 1996 magna cum laude, with a specialisation in composition. At present he teaches keyboard improvisation at the Lemmens Institute in the music therapy department, and he also provides the musical guidance and support for students in the spoken word department. As a cellist and pianist, he toured for several years with the theatre group De Frivole Framboos. As a pianist he is now a member of the salon ensemble Elixir d’Anvers, and he plays cello in the Baroque ensemble Aramos. He is also active as an arranger and a composer. As arranger he works with both classical music and jazz and pop music, producing arrangements for such ensembles as Il Novecento, Prima La Musica and the Walter Boeykens Ensemble. As a composer he has received commissions from, among others, Radio Klara (Flemish classical broadcaster) and Drielink (youth classical broadcaster), the Rubio String Quartet, Flanders Recorder Quartet and the Beethoven Academie. A number of his works have also won prizes. His Opus 1 for 12 solo strings (1990) won the first and the second prizes of the 1990 Wendungen composition competition and with his String Quartet (1995) he was honoured with the 1999 Prize for Contemporary Music, awarded by the Conseil des Arts et des Lettres du Québec in Canada.

For Martin Valcke, “composing music” means finding ways to express a “life force” or “primal will” in his music. His great example for this endeavour is Beethoven, with the highly energetic character he imparted to his music, as in the Fifth Symphony. With this abstract idea of a life force as the essence of his music, Martin Valcke is particularly keen to counter music in which overblown emotions take a central place, as in music of the High-Romantic period; at the same time, he also opposes the overly rational approach of music written by such composers as the serialists. In this connection, a slight evolution is noticeable in his music in recent years. Rather than steering completely clear of emotion, his most recent works have an increased emotional content, combined with the energetic aspect that nonetheless remains the central element in his music. This tendency can be seen in such works as Kol Dodi (2000), a composition for solo violin and 15 solo strings based on an Israeli folksong.

For the realisation of this abstract concept, Martin Valcke often takes one musical cell as his point of departure. He first explores the intrinsic possibilities of that basic motif by subjecting it to highly diverse melodic, rhythmic and harmonic processes. This ultimately leads to a great deal of musical material which he then uses for the actual act of composition. Valcke draws his inspiration for his basic musical elements from a wide range of musical styles. For works such as Roodkapje, De Wolf en De Zeven Geitjes (Little Red Riding Hood, the Wolf and the Seven Goats, 1994) and Kelderbeestig (1999), he looked to Latin-American dance rhythms, for instance. His Promenades (2001), a work for piano four hands and percussion, is composed for 16 drawings by Roeland Kotsch, himself inspired by Mussorgsky’s Pictures at an Exhibition. Appropriately, Valcke chose as his basic material the first two bars of Mussorgsky’s composition. Besides classical music, lighter genres such as pop, jazz and even hard rock very often serve as models for his music. In his String Quartet (1995), for example, he takes an idiosyncratic approach to developing rhythmic cells taken from rap. From jazz music he has appropriated the superimposition of triple over duple metres (for instance, in his Celloconcert, 1993). In most of Valcke’s works, including music for children, the process of development to which the basic element is subjected is so radical that the original material is often barely recognisable in the final composition. Several of his works are clear exceptions to this phenomenon, however, and may be considered as a separate category within Valcke’s oeuvre – a category which he himself describes as “humorous music theatre”. In these compositions he quotes certain melodies very explicitly. He adopts this postmodern quoting technique not without a certain degree of irony, always approaching the quoted melody and imitated musical style from a humorous and mocking point of view. In his Piano Concerto in F major (1999), for instance, he makes clearly audible use of many Christmas carols. His Divertimento (1999) for oboe and stings is conceived as a series of variations on a Flemish folk song, and in the course of the various versions he criss-crosses musical styles ranging from Haydn to Bartók.

In his music, Martin Valcke always strives for a form of melodic structuring. The way he achieves this is to some extent the result of his compositional technique. In order to form his melodies, he adopts something of an associative writing style: as he goes through variations, he moves ever further from his point of departure. In his quest for melody, the composer clearly does not draw on the High-Romantic, lyrical melody, but here too is influenced partly by Beethoven’s Fifth Symphony. In harmonic terms, Valcke’s central aim is an equilibrium between consonance and dissonance. Even when he constructs his composition out of a series of individual notes, he very deliberately goes in search of a commensurate proportion of consonance to dissonance. This entails a very carefully thought-out manner of treating his material. He first examines the harmonic possibilities and the implications of his series. Then he develops this series freely in his music, as a function of the balanced harmony. In recent years he has also introduced quarter tones into his music. These make their first fleeting appearance at the end of his String Quartet (1995). He has subsequently used this technique more extensively in, among other works, his Symphony (1997) and in Di Nakht (1998), an overture for two pianos in which one piano is tuned a quarter tone lower than the other. On the level of rhythm, Ligeti’s influence is clearly recognisable, particularly in the frequent use of micro-rhythms and repetitive processes. At the beginning of his String Quartet (1995), for example, over more than 40 bars Martin Valcke produces an unbroken stream of repeated quintuplets and repeated sextuplets that move through the various voices, but remain constantly present. His use of rhythm is, as noted, frequently based on lighter musical genres.

Martin Valcke’s oeuvre consists mainly of instrumental compositions, comprising only a few vocal works. The latter are works for accompanied choir (e.g., Da der Herr geboren for choir and symphony orchestra, 1991) and especially works for children, such as Kelderbeestig for childrens’s choir and piano (1999) and the musical Rossekrulsnor (1996). The dearth of vocal works in his oeuvre has mostly to do with Valcke’s ideas about setting text. For him, poetry does not need to be sung, but can stand on its own. In his opinion, music often threatens to harm the text. If a text is to be set to music, Martin Valcke attaches great importance to the clarity and intelligibility of the language. In his instrumental compositions, he usually chooses a scoring with classical instruments, with a light preference for strings. The style adopted for these instruments tends to the traditional. Only rarely, in the interest of clear expression, does he call for experimental instrumental techniques, as in Duo (2000) and Promenades (2001). 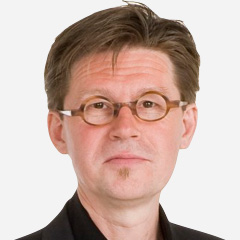