Peter Agnes August Swinnen was born on 31 January 1965 in Lier. From 1983 to 1992 he studied at the Royal Conservatory in Brussels, where he earned first prizes in music history, cello, chamber music, composition and practical harmony. He also graduated from the Queen Elisabeth Muziekkapel in Waterloo, after studies with André Laporte from 1989 to 1992. In 1993 he attended masterclasses with Michael Finnissy and five years later with Brian Ferneyhough. From 1990 to 1997 he taught cello in a number of music schools and since 1992 he has also taught analysis at the Royal Conservatory in Brussels. From 1997 he has held a position in the musicology department of the Katholieke Universiteit Leuven in connection with the ear-training computer program, UniSono, and with the New Music Documentation Centre MATRIX. In addition, Swinnen has worked as a freelancer for the VRT (Flemish Radio) and is regularly called upon to provide live electronics and recording engineering for various ensembles. Peter Swinnen won the CERA Prize of Youth and Music Flanders for his complete oeuvre in 1991, and his opera The Petrifying Blue received the 1992 Provincial Prize for Musical Composition from the Province of Antwerp. He also wrote the music for the Belgian Television film Andres, a Dirk Greyspeirt production with choreography by José Besprosvany, which won the Premio Choreografo Elettronico 1993 and two years later the 34th Bert Leysen Prize. For his work, Quar’l, Peter Swinnen earned the 1997 Prix de Musique Contemporaine of Québec. He has twice won the National Composition Competition of the Queen Elisabeth Competition: in 1997 with Canzone and in 2001 with Ciaccona.

Peter Swinnen was trained in the tradition of the Viennese School, particularly under the influence of André Laporte, himself a great admirer of Alban Berg. In the course of his education he wrote pieces such as IroMania and FugaEneas. The first work is a dodecaphonic work in the style of Berg. In this “triologedia” for string quartet, the concepts of irony – incorporated into the violin’s first theme – and mania are combined. As the title suggests, the dramatic progression of the Greek tragedy is followed, while the word “trio” in “triologedia” refers to a split among the four string instruments, whereby three of the quartet members turn against the isolated fourth member. FugaEneas was composed in 1990 after Virgil, and deals with the flight of Aeneas. The story takes place over four musical tableaux: the storm at sea, the fire in Troy, the love for Dido and the flight from Carthage. This work was composed for a composition examination at the music academy, and still shows traces of the Romantic tradition. It aims for a Romantic mood for each tableau through the alternation of sound palettes, as each tableau is given a specific orchestration. The title of the work has multiple meanings. The aspect of fugue is present in a Leitmotiv that is linked to the protagonist and which is also the main theme from Die Kunst der Fuge by Johann Sebastian Bach. In addition, the opening and the conclusion of the composition is conceived as a decorated chorale. Swinnen’s use of musical quotations had a double function. On the one hand, these quotations were intended to prove his knowledge during his musical training. On the other, they helped him to express himself as a beginning composer.

The second period in his oeuvre covers the period from 1993 to 1995, when he began to develop his acquired knowledge in his own direction. In the first period – immediately before and during his studies – Swinnen had evolved from a somewhat Romantic and dodecaphonic style to the freer atonality of the years after his studies. At the end of 1994, stochastic, modal and polyrhythmic elements were added; of this, more in the overview of his third compositional period.

From 1995-1996, a more consistent personal style began to emerge, marking the beginning of the third and, to date, last period in Swinnen’s work. While in the previous phases there was an attempt to reconcile tradition with the experimental music of the period 1950-1970, the developments of the 1980s and 1990s were now incorporated into the compositional process. Tradition does, however, maintain a place in his work. “The idea of the tabula rasa is not for me”, says Swinnen. The consequences of his new compositional developments were to be relatively great.

Starting in 1996, Swinnen no longer made use of quotations, since, in his own words, he wished to offer “a more personal answer” to the tradition with which he had been confronted during his studies. The influences of the 1980s and 1990s included the intensive use of the computer in the composition process. Applying his skills as a computer programmer, the composer developed his own composition program, integrating such elements as the stochastic. In contrast to the two previous periods, his music can now be considered not so much atonal as modal – including the use of quarter tones. This use of a modal system can be found in almost all works written since 1995, and especially since Xedalvu and the oboe concerto Idoviso.

All the same, it should be stressed that Swinnen’s oeuvre cannot always be reduced to the same sets of laws. “Each work creates its own universe”, says the composer, by which he means that for each work, different laws are developed, “as long as you remain consequent within a particular work”. One element does remain constant, however: Swinnen’s careful attention to the titles of his works. As has already been remarked in the publication, Nieuwe Muziek in Vlaanderen, Peter Swinnen is a narrative composer: there is thus a close connection between the musical content and the title of a composition. The title of the work is a synthesis of the content, an approach which in a sense increases the intelligibility of his music. His titles are – in the line of his teacher André Laporte – often plays on words. Swinnen is, moreover, a melodist, but his melodic style is extended to suit the actual context. This leads to melodies that are a succession of tones and even of noise-sounds. In these melodies, he also makes use of themes, since in his opinion “melodic themes are the best foundation for musical structure”. In Quar’l, the composer uses quarter tones within his modal system for the first time. The work consists of two movements, a development and a re-exposition. The exposition itself is absent, a fact that – especially during the re-exposition – creates a feeling of uneasiness, “as if you missed something”. The first movement is conceived as a quarrel that gets outrageously out of hand, but then gradually calms as the work approaches the re-exposition. The title of this clarinet quartet is reminiscent of Charles Ives’ second string quartet with its three movements entitled (1) Discussions, (2) Arguments and (3) The Call of the Mountains, echoing Goethe’s claim that a string quartet is “like a discussion between four intelligent men”. 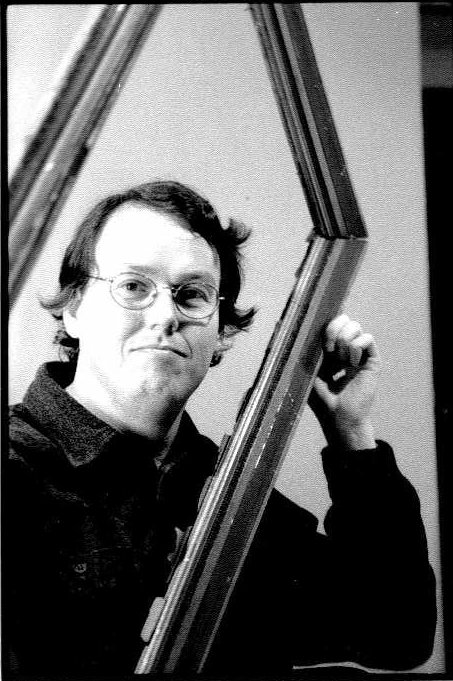