Paul Steegmans was born on 3 July 1957 in Hasselt. In 1980 he earned a diploma in piano and music education at the Lemmens Institute in Leuven, and went on to receive a first prize in fugue in 1985. From 1981 he took advance courses in piano with André de Groote (Brussels), Jacques de Tiège (Antwerp) and Jean Franssen (Maastricht). He later studied with Willem Kersters at the Royal Conservatory in Antwerp, earning his first prize in composition there in 1993. Steegman was a prize winner at the Baron Flor Peeters Composition Competition (with Concertstuk for organ, 1983) and twice in the Cantabile Competition (with Dance and scherzo for piano). In 1989, his Sonata for clarinet and piano was awarded the Albert de Vleeschouwer Prize. Compositions by Steegmans have been performed in Japan, Finland, Costa Rica and Cuba. Since 1980 the composer has taught piano and accompaniment at the Ghent Academy for Word and Dance and is guest teacher of practical harmony at the Lemmens Institute. Paul Steegmans is also well known as an accompanist of singers and choirs, and has given concerts both in Belgium and abroad (Germany, Sweden, England) as a soloist and improviser.

Paul Steegmans treads many paths in his compositions. Some of his works are very expressive and dissonant, others are more inspired by jazz or world music. The choice of a musical idiom usually depends on the nature of the commission or the purpose of the music. A work for professional chamber music ensemble or string orchestra, for example, is generally more dissonant than a composition for a children’s or youth choir. Steegmans never ventures into the world of the extreme, however, and his style can best be described as somewhat Neo-Romantic. Steegmans likes to make a connection with the Romantic tradition in his compositions, which he then works out in his personal way. Besides solo works (especially piano and organ works), songs and compositions for orchestra, he has also produced many arrangements, including arrangements of sacred vocal music.

Perhaps his best known chamber music work is the Trio for violin, viola and cello, dedicated to violinist Guido De Neve. This three-movement work begins with a powerful unison passage, after which the theme is developed throughout the composition. Frequently in this composition a motif is repeated for several bars by two instruments, one of which initiates its own melody. Another chamber music work is Girolago, a five-movement suite for clarinet ensemble and piano. The work’s name refers to the tour around Lake Garda in Northern Italy; the names of the 5 movements correspond with the five cities around this lake that Steegmans visited on a choir tour. The impressions of these places have been translated into a musical language. The final movement (Garda), for instance, has a processional rhythm, and a chorale can be heard, reminiscent of a sung procession which the composer witnessed in this city. The other movements, too, have their own character. The first movement (Sirmione) is very lyrical (a constant in Steegmans’ oeuvre), the third movement (Riva) is inspired by folk music and the fourth movement (Malcesine) exudes an intimate atmosphere.

The Saxophone Quartet, commissioned by the Notamus Chamber Music Competition and dedicated to the Glazunov Quartet, may be considered the most modern of Steegmans’ works. The first movement of this three-movement work for soprano, alto, tenor and baritone saxophones begins with an imitative passage, a technique often used by the composer. The lower voices enter fugally, after which the soprano saxophone brings in new material. After a homophonic, rhythmically striking passage (in 9/8, 12/8 and 6/8) there follows a new theme in the baritone saxophone that (like the first theme) makes use of all 12 tones in the octave. This melody is developed through mirroring and by shortening the theme over the course of the composition, so that eventually only a rhythmic cell remains. This takes place first in the outer voices, after which this role of motif development is taken over by the inner voices. The soprano and baritone saxophone then provide the rhythmic accompaniment. The short solo for the baritone which follows allows the whole to come to rest for a moment before launching into material that can be directly linked to that of the rhythmic passage. This passage is extended and closed off with a powerful and rhythmic crescendo. The other movements have a fairly conventional form, which once again reveals how the composer sets out to follow tradition in his own way. The second movement (the opening theme of which is later developed in the oratorio Stad van vrede, City of peace), for example, is a small-scale three-sectioned song in which a sort of rondo structure can be identified in the final movement.

Steegmans has also written a number of arrangements of folk songs, such as the Drie Oud-Nederlandse volksliederen (Three Old-Dutch folksongs) for string quartet (1991). This arrangement of Gekwetst ben ik van binnen (I am wounded inside), Heer Halewijn and Het waren twee konigskinderen (There were two king’s children) are written in a traditional musical language but easily surpass the level of arrangements which simply provide a melody with a harmonic structure. The orchestration of these works create a strong mood, as does the use of parallel fifths as a sort of drone accompaniment. These compositions are further characterised by alternating metres, imitative passages and (the moderate use of) dissonance.

Steegmans has also written much choral music, as well as a number of songs, including songs on texts by Guido Gezelle, such as Die avond en die roze (That evening and that rose) for middle voice and piano (1985) and the Drie Gezelle-liederen (1994) for middle voice and guitar. These three songs (Michaël – in which the first notes of the melody have been formed from the name Mietje and De bie) are also conceived quite traditionally. The guitar plays an accompaniment of repeated motifs under a lyrical melody. The whole has a Romantic and light-footed feel through the unbroken cantabile melody and the lack of strong rhythmic contrasts. The changes of metre lead directly from the text. Every seven years, the composer also writes the music for the Virga Jesse feast-days in Hasselt; this has resulted in 8 orchestral dances for the procession and many arrangements of songs by Paul Schollaert, who was instrumental in arousing Steegmans’ interest in music.

In his choral works, too, Steegmans shows that he can easily adapt himself to the style and the performers for which a work is intended. The songs for youth choir or children’s choir, such as De regen en ik (The rain and I) on a poem by René Geldof and those from the collection entitled Kinderwereld (Children’s world, eight unaccompanied songs on poems by Annie M.G. Schmidt) are elegant, popular and fairly tonal, but have a degree of complexity through the use of metrical changes and soft dissonances. The four-voice choral work, Muziek, written for the fifteenth anniversary of the youth choir Lyrica, conducted by Jos Venken, alternates between imitative and homophonic or unison passages. The whole is thoroughly tonal (with a conclusion in E major), but the addition of more daring dissonances creates an expressive composition with occasionally lively rhythms. Steegmans is also not afraid of text expression. Examples of this include the rock rhythm on the words “rock, soul or beat” and the subtle reference to Eine Kleine Nachtmusik when Mozart’s name appears. One of his largest choral works is the cantata Bijbelse vrouwen (Biblical women, 1997), written for the choir Schoonheid (now Cantus Vocum), directed by Leo van Nevel. For this seven-movement work, Steegmans researched instruments from the Old Testament, arriving at a scoring of woodwind quintet, harp and timpani as accompaniment for the mixed choir, soprano and baritone. The style of this cantata is in the tradition of Vic Nees, and although innovation is not Steegmans’ prime concern, there are a few clusters in the work, appearing sporadically as an effect.

In addition, the composer has written a great deal of lighter music, inspired by jazz (such as the Bluesette-variatie, on the well-known melody by Jean “Toots” Thielemans) and salon music. Steegmans describes these compositions, which are influenced by the work of Ravel, as “delicate, charming, unpretentious music to be enjoyed”. The Waltz in G major for piano and orchestra, for instance, is very accessible, if only through its clear sense of key. The whole is infused with a Romantic mood. The melody, always important for Steegmans, is very lyrical and the piano contributes to the work’s elegant atmosphere through its impressionistically tinted sounds. The frequent use of a hemiola rhythm forms a constant throughout his waltz compositions. The Invention for violin, clarinet and piano (with double bass ad libitum) is clearly rooted in jazz (especially the use of jazz harmonies) and Baroque music (to a degree). The opening notes of the composition (from which the rest of the work flows) are reminiscent of an invention by Bach, and Bach-style cadences are used throughout. The opening notes are first repeated and then varied, creating contrapuntal dialogues. This influence of light music stemmed from a duo that the composer formed around 1980 together with the vibraphone player Ludo Claesen. Most compositions in this style date from that period (1980-1985) He would later abandon this style, except for a few arrangements. More or less the final work in this style is entitled Met Bach op de koffie (A coffee with Bach) and is conceived as a series of variations on Bach’s famous menuet in G major. In such light compositions, however, Steegmans never encroaches on the territory of his other works, continuing to consider them as two different genres.

The most recent work by Steegmans is the above-mentioned Stad en vrede, premiered at the beginning of September 2003 by more than two hundred performers. Besides the specially written texts by Geldof, the composer drew on old Hasselt texts from the sixteenth century and works by Anton van Wilderode. There are historical, folkloristic, religious and present-day elements in this composition. The work begins with an impression of the city and how people live in it, but the contents are then extended to the whole world, dealing with such issues as the problem of hunger and war. 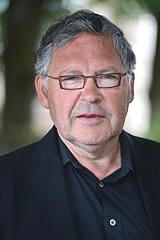