Eric Sleichim was born in Antwerp on 18 November 1958. He was self-taught as a saxophonist and a composer. At the beginning of the 1980s he played in numerous groups, such as Allez Allez, Lavvi Ebel, Simpletones and Soft Verdict. In 1984, Sleichim co-founded Maximalist! together with Thierry De Mey, Peter Vermeersch and Walter Hus. Maximalist! came into being a year after the musician-composers had met during Anne Teresa de Keersmaeker’s first dance production, Rosas danst Rosas. The image of the group was anything but classical: their music was a mix of rock, jazz and classical music. The performances were characterised by a nonchalance on stage, trendy (black) attire and an ostentatious display of exertion when playing. Nevertheless, Maximalist! could not be seen as an alternative pop group, but tended rather towards avant-garde classical, a breed of music difficult to place under either a classical or a popular heading. The treatment of the musical material leaned towards repetitive music, while the other aspects of Maximalist! pointed more in the direction of popular music. In 1991, the group ceased to exist, although Sleichim has continued to work regularly with the other members of this group, playing, for instance, with X-legged Sally, a group formed around Peter Vermeersch.

In 1988, Sleichim founded his own saxophone quartet, the BL!NDMAN Quartet which besides performing his own compositions, plays works by young composers as well as such established names as Xenakis, Cage and Stockhausen. The quartet is continually exploring the sound possibilities of the saxophone, resulting in a very rich sound-palette. The name BL!NDMAN refers to Marcel Duchamp’s magazine, The Blindman (1917), published in New York. In this magazine, a blind man guided the public through an exhibition. Another reference is to the “blind” Joseph Beuys in his performance “Wie man dem toten Häse die Wahrheit erklärt”. Beuys would later appear in Sleichim’s first work for the quartet, Five Movements for Beuys (1988).

Besides founding the BL!NDMAN Quartet, Eric Sleichim initiated the Antonyms project. This project brings together four saxophonists, each of whom writes an original composition for the quartet. In this way the composer hopes to broaden the saxophone quartet repertoire.

Sleichim often works together with artists from other disciplines (dancers, performers, theatre makers, writers and visual artists), both as a soloist and with BL!NDMAN. Jan Hoet chose him for a series of solo performances in the Museum for Contemporary Art in Ghent in 1985 and for the compositions Non-Euclidian Solos and Verwicklungen/Les Anamorphoses for Documenta IX in Kassel in 1992. In 1994, a septet was formed by the combination of BL!NDMAN and the Dutch-Arab trio WESHM. From 1994, Eric Sleichim has also composed music to accompany silent films. In 1997, the BL!NDMAN Quartet played Terry Riley’s In C together with the Ictus Ensemble. For Brussel 2000 (European Cultural Capital), he premiered La Grande Suite.

Sleichim’s oeuvre can be seen as one great work-in-progress around the saxophone. From his experience as a musician there grew a frustration concerning the conventional use of his instrument. He experienced a hiatus between the classical music world and the jazz world. Contemporary music opened a vast universe of possibilities, but he found the physical energy of jazz to be lacking.

Eric Sleichim has thus felt the need to develop a new language for the saxophone in order to link the two worlds. From this aesthetic perspective, he sets out to find other sounds and to work with them. He thus works with sighs, with the sounds of the keys on his instrument, with all manner of muting techniques or with the sound of the instrument being struck. Improvisation and composition are closely allied with this sound-exploration. Each phase of his exploration is added to the previous experiences and to the potential composition material. His compositions are not simply glimpses into his research; Sleichim presents only the finished product. In this way he creates order in his sound universe. By means of his scoring (soprano, alto, tenor, baritone), the saxophone quartet becomes the ideal point of departure for his compositions; in this way he has the whole gamma of tessituras at his disposal. Poortenbos (1989) for saxophone quartet is a suite with twelve parts, three movements and nine gateways. Throughout the work, different solos and combinations of duos and trios alternate with the complete quartet. Notions from the world of electronic music, the positive sciences and mathematics are used as titles of compositions; these are, however, informal references rather than underlying compositional principles. In his Non-Euclidian Solos (1992), Sleichim takes his sound-explorations to new lengths. The work is based on plugged-up instruments. The performers must practically blow their lungs out in order to produce a sound. Verwicklungen/Les Anamorphoses (1992) for saxophone quartet approaches silence through breathing. In this work the musicians produce a high, airy sound through their manner of breathing. The listener thus begins to concentrate on the tiniest deviation in the sound of these airy tones. In both works, the composer explores the borders between sound and the absence of sound. In structural terms, the works are based on theoretical-mathematical constructions, but the auditive result seems never to leave the phase of improvisation. In this way he attempts to compose out of silence.

Besides sound-exploration, interdisciplinary work is an important pillar in Sleichim’s compositional art. For example, in his soundtrack for Steamboat Bill Jr. (1996), he combines his unique saxophone sound with sampled special effects. For Breath (1995), he worked together with the German multi-media artist, Ulrike Gabriel. In this project, images were generated by means of an interface between a computer program and the breathing of a performing musician. For Brussels 2000, Sleichim premiered the project entitled The Autonomous Zones: a Ring of Modules. The concept for this project was based on Hakim Bey’s Temporary Autonomous Zones theory. In the project, Sleichim, in seven separate modules, confronts artists from other disciplines. La Grande Suite (2000) is an adaptation of this large-scale project. For this performance, Sleichim worked together with Guy Cassiers. The result is a mix of dance, multimedia, music, literature and video.

Eric Sleichim alternates his own work regularly with the transcribing and arranging of compositions for saxophone quartet. For instance, he has arranged works by contemporary composers such as Louis Andriessen, Karlheinz Stockhausen and Iannis Xenakis. Sleichim has also turned to the old masters, transcribing chorale partitas by J.S. Bach for saxophone quartet. In this he considers the quartet as one instrument, that can be played like an ever-changing, multidimensional keyboard. He attempts, for instance, to apply traditional organ registers to this “new instrument”. Through the great stylistic diversity within the variations, the composer can allow the different facets of the saxophone to be heard. For Bruges 2002 (European Cultural Capital), Sleichim also arranged compositions from the repertoire of the Flemish polyphonists. 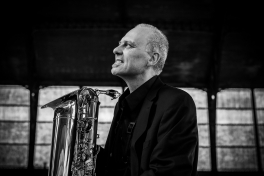