Frank Nuyts was born on 3 February 1957 in Ostend. He received his musical education at the Royal Conservatory in Ghent, where he earned higher diplomas in percussion and chamber music. After submitting several compositions written during his studies, Nuyts was invited by the composer Lucien Goethals to study composition and analysis of 20th-centruy music. The study of Goethals’ own music, together with that of Webern and other modernists had a particularly profound influence on Nuyts. The first official compositions produced in this period were thus composed in a post-serial idiom. A further source of inspiration was found by the composer in contemporary literature, which would be a constant throughout his career. In addition, his involvement in the reception of Chilean refugees led to the writing of various works in which the composer emerged as a politically committed artist, and in which the influence of Latin-American music is clearly evident. In this period, Nuyts applied his talents as a percussionist, premiering several works especially composed for him by such composers as Buckinx, Goethals and Goeyvaerts. In 1977 he met his future wife, the pianist Iris De Blaere, who would subsequently premiere many of his works.

In the period from 1979 to 1985, Nuyts began to enjoy recognition on the new music scene, winning several prizes including the Belgian Radio and Television’s Tenuto Prize for Composition in 1979 for Alsof de hand nooit meer weggaat (As If the Hand Never Parts Again) and an award for the soundtrack (the composition Bombos del Sol for the abstract animated film Kosmogonia at the Brussels Film Festival. He undertook a concert tour to Hungary in 1982 and also premiered works for a number of important occasions (including Philtre at the Gaudeamus Festival for New Music in Amsterdam in 1984 and Squib to conclude a conference on neo-tonal music in Seoul in 1985). In 1985, Nuyts was appointed a teacher of composition and percussion at the conservatory in Ghent.

In 1986, after a period of reflection, Nuyts’ interest in non-classical music and his friendship with the composer Boudewijn Buckinx took him in a new direction, as he became – together with Buckinx – one of the most important representatives of postmodernism in Flanders. His first important postmodern works, Rastapasta and Woodnotes, were premiered in 1987 together with several works by Buckinx in a controversial concert in Ghent. In 1989, the group Hardscore was founded, in order to ensure appropriate and accurate performances of his works. Nuyts wished in this way to build a bridge between more commercial music and contemporary classical music. Further important facts from the period from 1986 to 1995 were the collaboration with the Vooruit art centre in Ghent (premieres of B-Side Art, Music to Raise Hell, Ga.n and Le concert impromptu), the contacts with the composer-conductor Dirk Brossé (premieres of When the Tombs of Brass Are Spent and the Second Symphony), several concert tours to Glasgow and Vienna and in 1992 the Prix de la musique contemporaine de Québec for his complete chamber music oeuvre. In 1995 Frank Nuyts received the city of Ghent’s five-yearly culture prize.

Nuyts’ first important composition, Alejándome del camino (1976), for flute and piano, is composed in a serial idiom: the pitches are organised in series, there is a great diversity in dynamics and playing techniques, and the last movement is conceived as the retrograde version of the first. An important characteristic of Nuyts’ music, the generally quick tempo, is already here.

From 1980, Nuyts attempted to reconcile serialism with a tonal language in which tonal intervals could again take their “rightful” place. Sonivers II (1980) is a politically coloured work connected with the events then taking place in Chili. Nuyts uses texts by Latin-American poets, and the tape used in the work is based on permutations of the numbers 1, 9, 7 and 3, the year of the coup in Chile. In this work, passages clearly inspired by serialism alternate with Latin-American melodies à la El condor pasa. The transitions are very subtle as the two moods blend with one another. Here too, the driving force of traditional rhythms is continually present. A subsequent work, Sprint (1982), is based completely on this element of drive; it is a programmatic work that with its many sudden stops and then forward rushing movement, attempts to evoke the sur-place and final sprint of a cycling race. In the saxophone quartet, La sale mere, le boeuf et le crampon (1981), a number of trivial elements are used. Within this technically very demanding work, a number of popular tunes are cited, and what Nuyts calls all the “vulgar mannerisms of the sax” are heard. This all takes place against a background of a serially-organised timeframe – Nuyts speaks of “time reservoirs” – which thus in complete freedom and according to his own principles can be “filled in” with the most diverse material. Squib is the last of the composer’s works to be organised according to serial principles. In this piece, the composer takes as his point of departure a rhythmic cell, developing from it various other rhythmic patterns which are contrapuntally developed into a particular constellation. Out of this rhythmic counterpoint, Nuyts works out a quasi-tonal melodic line, which in turn gives rise to a second, equally tonal-sounding melody. The work is then based on these two melodies. Nuyts successfully creates the impression of atonality in this essentially tonal music by combining it with typically serial gestures.

The next important composition, Rastapasta (1986), represented a clear break with Nuyts’ line of development as a composer. Starting with this work, he left serialism behind him. Music could again be simply tonal and have a beat. The actual material of the work did not seem important to him, but rather the manner in which a composition is handled. The listener is invited to listen to tiny subtleties hidden beneath an apparently simple music – subtleties which are perceptible precisely because of the simplicity of the material. For the rhythm, Nuyts drew inspiration from reggae and the music of the pop group, The Police. Highly typical of this music is that both in the drums and the vocal part, the “strong” beat only very seldom falls on the “right” place, while “weak” beats in the bar serve as the points of stability. The harmony undergoes this same shifting, creating an ambiguity on this level as well, and making it all seem more complex than it actually is. The opposite is also the case in Nuyts’ works: behind apparently simple music there lies hidden a high degree of technical virtuosity and complexity. In his music, Nuyts plays with the listener’s perception: he allows listeners to enjoy, while at the same time hooking them in with deceptively simple means.

Rastapasta – the title itself gives an idea of the work’s form, “rasta” referring to reggae and “pasta” (paste) to the element of shifting – was thus the first piece to be written according to these principles. It is based on a motif from Don’t Stand So Close to Me by The Police, which is repeated, unchanged, in ever-changing contexts. The Symphony of Scraps (1988) consists of a number of totally independently composed fragments placed next to one another. Despite the heterogeneous material, Nuyts is able to give the work a symphonic feel. The Second Symphony “Wal” (1993) is Neo-Romantic in conception, illustrating that Nuyts’ basic concept, as first heard in Rastapasta, also had its sensitive side.

In 1995, Nuyts began to compose a number of music books for Hardscore; there are now six such books, representing more than four hours of music. In this way, Nuyts is attempting to flesh out a complete “Hardscore idiom”, an idiom that began to take form with such compositions as B-Side Art (1990) and When the Tombs of Brass Are Spent (1991), revealing clearly the influence of Frank Zappa. Each book is conceived around a particular, sometimes socially-critical theme such as ecology or the sea. In his Hard Scores, Nuyts plays the rock music card even more explicitly, as the sound is determined by drums and synthesizers, within which the other musicians (including marimba, sax, vibraphone and voice) perform strange gymnastics. In these unruly elements – the strange turns of phrase in the vocal line, the sudden transitions, the interruption of the beat and the technically very high degree of difficulty – Nuyts’ “classical” background is still audible. Among the more significant numbers are The Vaporous Existence of Harry the Termite (book 2), Indian Prodioux (book 3), Bolere and Deaf by techno (book 4), and Kite control (book 5). In Hard Scores for Orchestra (1996), the Hardscore idiom is transposed on to a classical orchestra. This is contrasted with the Third Symphony (composed as a counterpart to Haydn’s Symphony no. 22), in which the influence of Stravinsky is clearly recognisable. 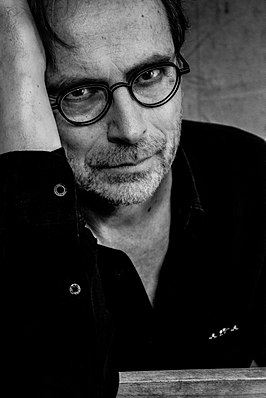