After his studies with Ligeti, Meylaers composed An Hungarian Summer for piano (1996). In terms of structure, the work consists of six short, contrasting sections, mutually linked by a central chorale theme. The work is an idiosyncratic version of a theme and variations. In purely auditory terms, this sounds like a work from the Romantic period, characterised by compositional techniques also found in works by Ligeti, Bartók and Liszt. The prelude to the work refers to Ligeti’s Continuüm for harpsichord (1968). Continuüm is a work characterised by, among other things, phase shifts, resulting patterns and extension of the motif through the addition of notes. There is also no use of bar lines in the work. Meylaers incorporates these stylistic elements into An Hungarian Summer. In contrast to Ligeti’s Continuüm, however, no overarching parameters are set out in the prelude. This is a result of the slow tempo. By the same token, the slow tempo makes every note in the composition important, allowing all the accents and rhythmic shifts to be notated in detail. This results in a permutatively-based emphasis on the main notes in the chorale melody. In the toccata movement, all the diatonic material is distributed over both hands, a reference to Ligeti’s Désordre, etude for piano (1985). Once again, the slow tempo is significant, preventing any sense of disorder when the motif is extended by adding a note in the right hand. This addition does lead to the formation of an anhemitonic pentatonic element, suggestive of Bartók and Hungarian folk music. Bartók’s influence is also evident in the 13-bar third movement. Characteristic in this movement is the asymmetrical metre that changes bar by bar. The work ends in the style of Liszst’s Hungarian Rhapsodies, in which the theme is supported by chords with a great density, accompanied by virtuoso glissandos. Ligeti’s influence can also be heard in the first movement in the Suite for clarinet and piano (1999). The work, which has a virtuoso and ephemeral character, refers in terms of texture to the final movement from Ligeti’s Selbstportrait mit Reich und Riley (und Chopin ist auch dabei) from Drei Stücke für Zwei Klaviere (1976). Both Ligeti and Meylaers drew their inspiration from Chopin’s piano sonata in B-flat, op. 35.

Meylaers’ composing style can be described as free-atonal. An essential point of departure is the creation of an accessible musical language, in which the lyrical aspect is linked to the essence of the emotion, the two held cleverly in balance through rationality. Meylaers, who despite his studies with Ligeti describes himself as an autodidact, does not seek to form part of any particular musical school. He is completely uninterested in the kind of complex developments that have taken place since the 1950s. These have led only to inaudible musical processes. In this sense, Meylaers has positioned himself closer to the ideas of Steve Reich and Ligeti. Nonetheless, Meylaers does have his favourites among contemporary composers, including Mikhail Bronner, John Corigliano, Einojuhani Rautavaara, Peter Sculpthorpe, Arvo Pärt and Henry Gorécki. Each of these composers works from a specific cultural context, within which they try to create a musical language in an original way, making the link between emotionality and reason.

Meylaers demonstrates his mastery in creating a lyrical melody in Elegy for cello and piano (1998). In this slow work, the cello develops a melody out of the depths of the music, subsequently advancing it elegantly and ingeniously. In this work, melancholy is expressed by a melody which at once seems to hover and to have a French sense of lightness. It is characteristic that the melody-line so constructed is always based on the possibilities of the instrument. This approach results in a sound that always strikes the listener as agreeable. Two other works in which Meylaers exhibits his talent for lyrical constructions are the Trio for clarinet, cello and piano (2000) and Meditation for horn and piano (1999). In Meditation, the melody is supported by chords in the piano, which ticks along like a clock, a reference to Ligeti’s concept of clocks and clouds.

Although Meylaers’ scores have a simple look, they hold within them a complex and multi-layered structure, often entailing polyrhythms and polyphony. Polyrhythms play an important role in Aracoara for string quartet and piano (2003). The work is a musical reminiscence of the composer’s time in Brazil. Aracoara (Sunset) consists of two contrasting movements. The first movement says farewell to the day, while the beauty of the landscape is described in melancholy terms. The second movement tells of real life, which only gets going in Brazil after sunset, when love, football and music reign supreme. Samba and bossa nova play an important role in the nightlife. South-American rhythms give the work a polyrhythmic feel. In contrast, Waves for cello and piano (2000) is characterised by a virtuoso style. The interaction between the cello and piano give the work a polyphonic character. The lively interplay between the two instruments is strengthened by the frequent succession of asymmetrical metres. The musical point of departure in this work is the play of waves washing up and receding, a phenomenon with an inherent polyphonic quality.

The starting point for Meylaers’ compositions is always a seminal idea, out of which a cellular structure develops, further worked out in what might be termed a through-composed style. New musical elements are continually added over the course of the composition. The final result is an organic whole, which comes across as one overarching musical concept. In Waves for cello and piano (2000), the rhythmic motif of the opening bar forms the nucleus of the composition. Although the work consists of two long outer movements, divided by a very short, cantabile middle movement, the motif is always reworked and spun out in a playful and expressive manner. The constantly changing rhythms in the separate parts provide the element of variation and keep the tension building.

In Meylaers’ work, the process of composition takes place within the natural parameters of tension and release, basic elements of all music. Within this field of tension, comparable to the tonic-dominant principle, Meylaers undertakes a very personal quest for an accessible, emotion-based musical language. Meylaers’ compositions are characterised by a certain spontaneity, not to be confused with any notion of impulsiveness: each note is to be read in function of the whole composition.

Meylaers’ oeuvre forms a rational reflection of his own life story, a running theme throughout all his compositions. Daily events, emotional experiences and even the taking of a political stand all play roles here. Political engagement is the source of inspiration for Hymn for violin, clarinet, cello and piano (2002). An actual experience with a child who lost his parents in the war in Kosovo forms the basis for the composition. The work is an ode to humanity and a call for more peace and humanity. Lost city for soprano saxophone and piano (2003) is inspired by a South-African legend, which tells the story of an ancient civilisation destroyed by an earthquake. Meylaers’ spontaneity and rationality are expressed in this work through the creation of an opening motif characterised by a hocket-like construction. By conjuring up an earthquake in this way, Meylaers links an old musical technique to an event from a distant past. Impressions gained in everyday life form the basis for the composer’s creation of a composition’s opening motif and its further development, suggesting the form that the composition will assume. 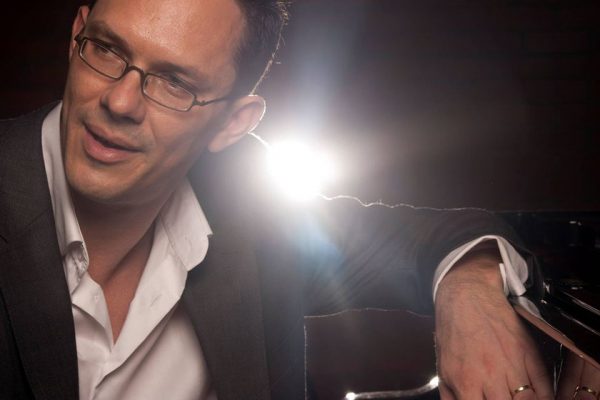