Lucien Goethals was born on 26 June 1931 in Ghent. His spent his most important formative years in Argentina, where he studied at the Dima Conservatory of Buenos Aires (1933-1946). When he returned to Belgium, he continued his studies at the Royal Conservatory in Ghent until 1956. Here he earned his first prize in organ, music history, counterpoint and fugue. Despite the conservative climate of the Flemish musical landscape, Goethals’ musical interest turned increasingly to the new international developments (serialism, electronic music, aleatory music). This interest was further stimulated by Norbert Rosseau, who introduced him to dodecaphonic techniques, although Goethals was largely self-taught in his evolution towards and thinking through of total serialism. As a composer and a producer for the Belgian radio, he was, like Louis de Meester, associated with the Institute for Psycho-Acoustic and Electronic Music (IPEM) in Ghent, from its founding in 1963. This offered him the opportunity to experiment with tape and electronic sound generators. He continued to work there until 1987. His many years of commitment to the IPEM explains the large share of electro-acoustic compositions in his oeuvre. Together with other young composers and musicologists, he was part of the SPECTRA work group (1963-1967).

Goethals’ intensive involvement with the musical avant-garde of the 1960s was also evident in his participation in courses in Darmstadt and Bilthoven. Besides studies with Gottfried Michael Koenig, he furthered his studies in Utrecht (Instituut voor Sonologie) as well as in the use of the computer as a compositional medium. From 1971 he taught music analysis at the conservatory in Ghent. His students have included such composers as Filip Rathé, Petra Vermote and Frank Nuyts. In 1996 the Lucien Goethals Society was founded. This society concentrates both on the dissemination of the music of Goethals and his generation, and on the promotion of contemporary music in general. Goethals has already been awarded numerous prizes, most recently the ANV-Visser Neerlandiaprijs (1999). Lucien Goethals died in Ghent on 12 December 2006.

Goethals’ musical oeuvre from his student period was largely marked by eclecticism, along the lines of Neo-Classicism. Soon after, he began to distance himself from the official aesthetic, initially by adopting dodecaphony (Musica Dodecafonica for piano (1957)), and subsequently through the serialisation of other musical parameters and the introduction of aleatory mobility (Twee Kristallen for piano (1961)). Goethals thus belongs to the second generation of serialists, who brought into more general use the achievements of the 1950s. In his work, for instance, the serial principal is not only applied to the twelve-tone division of the octave, but also to nineteen- (Contrapuntos, Vensters) and twenty-four-tone divisions (Studie VI, Zeven Haikoes). The same is true of complex sound phenomena such as electronic spectra and instrumental clusters. In this case the twelve-tone differentiation is often accompanied by a series that organises the density of the spectra and the clusters. This broadening of the serial technique goes hand in hand with a more flexible approach to it. On the level of pitch and rhythm, this expresses itself in ostinato repetitions of segments of series, and on the level of phrasing and dynamics by building towards a climax (procedures normally considered at odds with the serialist ideal of creating music that is as varied as possible). Moreover, Goethals does not let the series matrix simply run its course like a wind-up toy, but intervenes regularly during the process. The automatic sequence of events is often interrupted. The role of the composer is thus not limited to the pre-compositional stage. Despite these characteristics, Goethals remained true to the purely chromatic treatment of the series, in contrast to developments made by others in the late 1950s and early 1960s.

Lucien Goethals’ first electronic compositions (Studie I-III) were to a large extent influenced by concrete music. Studie V represents a new attitude to the material: empiricism makes way for a serial-statistic ordering. The collaboration with Landrieu, an engineer, resulted in Studie VIIb. The programmer designed by the engineer applied a random function to the series, resulting in ever-changing combinations.

Besides the purely electronic studies, Goethals also took on the confrontation between electro-acoustic and instrumental approaches. With Diàlogos (1963), he was one of the first composers to accord to this issue a central role. The integration of the two media (orchestra and tape) was at this stage still carried out in an alternating-antiphonal way. Starting with his Endomorfie I for piano, violin and tape (1964), the various sources of sound were mixed with one another from start to finish. The quest for a homogeneous sound-world reached its highpoint with Cellotape for cello, piano and tape (1965); this was achieved both through the instrumental handling of the tape and through the electronic amplification of the cello through a contact microphone. The problem of musical coherence and integration of the material is more acute in Contrapuntos for twelve tapes (1966). An equal number of speakers are distributed evenly over a given space. As visitors move through this space, photo-electric beams are interrupted. This interruption in turn activates a corresponding tape recording. The density of the composition is directly proportional to the number of visitors and the speed with which they move. Despite this, a large degree of musical unity is assured by the basic material on the various tapes. The introduction of the mobile form in electronic music is without a doubt one of Goethals’ most important contributions to music history. The title of the work also reveals another central characteristic of his music: the importance of the linear. Counterpoint is also the chief means for linking instrumental and electro-acoustic sources of sound (Sinfonia en gris Mayor (1966)). In a number of multimedia projects the idea of the “sonore continuum” is opened up to the visual sphere; these include Vensters (Windows) (1969) and Hé!…(1971, realised in collaboration with Karel Goeyvaerts and Herman Sabbe). The visual aspect is also prominent in Llanto por Salvador Allende (1973) for solo acting trombonist, a work that, moreover, reveals the social engagement of this composer.

The 1970s saw a new direction in Goethals’ work. The extrovert disappears in favour of a more interiorised tonal language (Musica con cantus firmus triste (1978); Pampa (1979); Paisajes Interiores (1983)). Reminiscences of the tonal world are here no longer studiously avoided. In the third movement of Tres Paisajes Sonoros (1973), the serial progression is continually interrupted by tonal cadential formulas. Diferencias for 10 instruments (1975) even consists almost completely of quotations from various styles. And yet Goethals cannot be labelled a postmodernist. For him, musical reality cannot be conceived as a reservoir from which any number of elements can be drawn in order to satisfy one’s own needs. It is rather a necessity, a factor which cannot be ignored. A musical quotation has thus for Goethals no intrinsic symbolic value, only a material value. In this sense he remains an heir to generalized serialism. Tonality and atonality are placed in a dialectic relationship. At present Lucien Goethals is continuing along this path in the nineties (Concerto for bass clarinet and orchestra (1985); Concierto de la Luz y las Tinieblas (1990); Azulejos (1991); Second String Quartet (1992)). 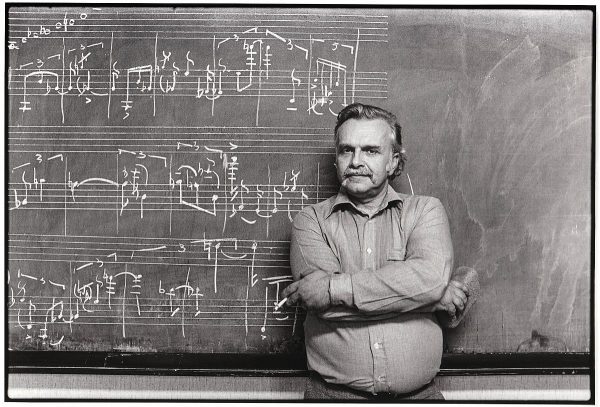