Norbert Goddaer was born on 26 January 1933 in Kortrijk. Besides his diploma in General Music Education (first grade), he earned 8 first prizes at the Royal Music Conservatory in Ghent (in solfège, transposition, clarinet, saxophone, chamber music, harmony, counterpoint and fugue). Goddaer studied composition with Jan De Cadt. In the 1950s he was a member of the “Hot Club van België”, a jazz club which won first prize in the Modern Jazz section at the 1955 International Jazz Competition, an event which the group organised. Goddaer is still known as a fervent jazz fan. He taught at the Music Academy in Harelbeke, the Municipal Conservatory in Kortrijk and the Royal Conservatory in Ghent. In the 1979-1980 academic year, Goddaer was appointed State Inspector of secondary and post-secondary music education, but subsequently opted for the position of director of the Music Academy in Wetteren, at the same time teaching harmony at the conservatory in Ghent. He also made arrangements for the Belgian Radio Choir and was guest conductor of the group. He produced a number of collections of harmony, counterpoint and fugue exercises, as well as notation lessons, rhythmic studies and exam lessons. Goddaer continues to write vocal, instrumental and digital music.

Goddaer describes his musical style as eclectic. This means that existing techniques and styles are applied, allowing the composer to develop new personal tendencies. “Music made out of Music” is Goddaer’s motto.

Goddaer’s compositions reflect his everyday life, drawing his inspiration from different situations. Travel impressions form the basis of the works How about London, Escapism, Cordoba, Flâneries and Five Mosaics. How about London (1995) for brass band is dedicated to Lieven Maertens, conductor of the Kortrijk Brass Band. The work has 5 movements (Allegro deciso – Grave – Moderato – Scherzo – Marziale), and is a compilation of flashes and impressions of street life in London: the hurried traffic of pedestrians, cars, taxis and the famous double-deckers, as well as the array of different shop windows, theatres, historic monuments, royal parks and the changing of the guard. How about London was awarded the B.A.P. (Belgian Artistic Promotion) Prize by Sabam (the Belgian artists’ rights organisation) in its 1995 Band Competition. Reflexions de Cordoba (1998) for wind band is inspired by Spanish folk dances: typical southern rhythms and melismas are combined with flamenco chords. The work is in 3 movements: Flores – El Cochero – Que ere bonita.

In contrast, other compositions, such as Requiem, Suite Cabriolesque, Wink, EbbTide, and Amen Choral draw on specific moods. Suite Cabriolesque (1996) for clarinet choir is a suite in classical style: a succession of 5 movements in the same tonality, each with a different character. The first movement, Quadrille (leggiero) is a succession of motions and figures performed by many dancers. Java (moderato) is a popular dance in ternary metre. This is followed by a slow movement, Guingette (lento), musically descriptive of a small café where the patrons listen to music, chat, dance and drink. Valse muette (allegro) is a bal musette, an 18th-century genre with a pastoral character. The final movement, Cancan (bravura), is a very animated and acrobatic quadrille, performed by the ‘girls’.

Concerto in C Minor, Clarinet Unlimited, Nexus, Paganinesque, Sonata and HardScore were commissioned compositions. The Concerto in C Minor (1977) is written for solo clarinet and concert band. Bravura and dolce passages alternate in the first movement (allegro). In the virtuoso passages, the solo clarinet is accompanied by the complete concert band with percussion. The following movement (without percussion) is characterised by a different texture: the solo clarinet plays ‘sweetly’ and is accompanied ‘personally’ by another clarinet; the general accompaniment is handled by the clarinet, saxophone, horn and flutes. These passages are then repeated in a varied form. Then comes a quite virtuoso solo clarinet passage, once again accompanied by concert band. The Allegro is rounded off as it began, as the bravura passage from the beginning is played again. In the second movement (lento), the solo clarinet presents a number of motifs, which are then imitated by other instruments. This is followed by a cadenza for the solo instrument. The second movement concludes with a repetition of the opening passages, as in the Allegro. The Scherzo has a ‘sparkling’ character, and is introduced by the concert band. The solo clarinet again plays several motifs, which are repeated by other instruments. The bass clarinet comes to the fore, alternated with accompaniment by the concert band. A trio made up of solo clarinet, clarinet and bass clarinet follows. The Scherzo finishes as it began. The final movement (rondo) alternates between Allegro con brio and Grazioso, recalling the alternating bravura and dolce passages from the opening Allegro movement. Clarinet unlimited (1999) for clarinet solo is written in an accessible 20th-century style. Calm, jazz-like movements alternate with virtuoso passages.

Goddaer has composed many works for big band, brass band and wind band. Big Wind Band project (1994) for big band and wind project are variations on a ‘chorus’ in 3 movements. The first of these, Please, show me the way to the School of Music (allegro giocoso), is a dialogue between the wind band with its typical characteristics and the swinging style of the big band. Simultaneous binary and ternary figures playfully allude to the contrasts between traditional and present-day ideas. The second movement is the Donde esta la Banda Grande (andante), in which the Banda Grande conjures up the enjoyable atmosphere of the bossa, a Latin dance. Second floor, room four (scherzando) is a compilation of the 3 variations that form the finale of this light-hearted and playful dialogue. Big Wind Band project is a recollection of music school: the first steps in music, the classrooms, the lessons, the meeting place for musicians. Hymn to my home town (1994) for brass band is a tribute to the city of Kortrijk. The opening, a choral melody, creates a solemn and peaceful impression. The central movement is fugue-like in style, musically expressing the struggle for the emancipation of Flanders. Dissonances represent feelings of destruction, suffering and mourning. The end of the struggle and the restoration of peace in the city is musically represented by the return of the main theme in the reprise. Where the golden river flows (1997) for wind band, was written for the 15th anniversary of the Crescendo Concert Band from Bissegem, and dedicated to the conductor of this group, Norbert Vergalle. The title refers to Bissegem itself, and the “Golden River” is the River Leie. The work consists of 4 movements: Celebration bells opens with festive bells on I and V; Celebration tune is a solemn and stately festive song; Celebration march is a cheerful and sprightly march; Celebration party concludes with the festive bells from the beginning (“the party’s over”).

As might be expected of a fervent jazz fan, Goddaer has written a number of works inspired by jazz. Ni Hao (2000) for brass, clarinet or saxophone quintet is a jazz waltz. In Sabam’s composition competition for jazz themes (in collaboration with ‘Jazz Hoeilaart International’s Europ’Jazz Contest Belgium 2000’), it was awarded the B.A.P. Prize. Other jazz-inspired works are Blue Fusion (1997), a blues theme for piano, and Bluesology (1984), a jazz suite for piano. 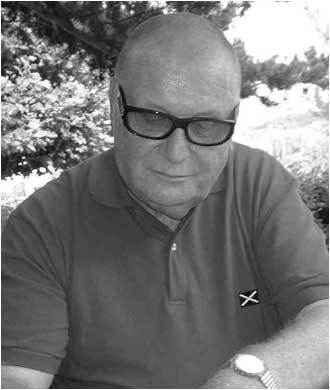