Hanne Deneire, born in Hasselt on 23 June 1980, studied composition with Wim Henderickx and Luc Van Hove from 1998 to 2003 at the Royal Conservatory in Antwerp, where she also studied bass clarinet and piano. While still a student she won a number of prizes. Mitä, her first orchestral work, was awarded a prize in the 1999 Aquarius Composition Competition. This work was premiered by the Beethoven Academie, conducted by Jan Caeyers. In 2000 she received a bursary from the Antwerp Conservatory Society. Deneire already boasts a number of works commissioned by such well-known ensembles as Oxalys, Hermes, Syrinx, the Leuven Alumni Orchestra and the Flemish Philharmonic Youth Orchestra. She also remains active as a performing musician, including appearances as bass clarinettist together with Eric Raevens (dance) and Eric van Thillo (text) in Jot, a young person’s performance that has appeared in numerous Flemish theatres. Besides her musical activities, Hanne Deneire shows a strong interest in using art to work with children with special needs. For her work with gifted children she received the 2003 “Cultuur bindt jeugd” (Culture unites youth) Prize from the King Boudewijn Society, an award for artists’ socio-cultural engagement. In 2005 she also earned a bachelor’s degree in psychology from the Vrije Universiteit Brussel. Another of the composer’s passions is dance. In 2001 she undertook studies in choreography at the Higher Institute for Dance in Lier, which resulted in February 2002 in a first choreography, Samree. In addition, she has collaborated with Hush Hush Hush Company and CC Berchem, for the dance project, Bobo in Paradise (2001-2002).

Hanne Deneire acknowledges the influence of a number of different compositional styles, a fact that can be heard in her work, which is at times based on dodecaphony and at times on traditional tonal song. She has also applied an aleatory style. In one of her earliest works, the award-winning work Mitä, she combines traditional notation with an aleatory style. The next work she wrote (Syd) is, in contrast, based on a Schönbergian dodecaphony. It is clear that Hanne Deneire works in different approaches to composition in parallel, choosing her approach in function of the work at hand. Recurring themes in her work include the conflict between contrasting forces resulting – or not – in a new unity, questions of life and death, the quest for meaning of life, circular movements, the search for balance without finding it… These questions are typical of an Indian way of life. Another reference to India is the fact that she does not give her works opus numbers but rather “Sruti numbers”. The word sruti comes from Indian music and is used for the interval between two different pitches.

All the texts that Hanne Deneire uses for her vocal works have very different origins. Paradiso, Purgatorio and Inferno are, for instance, all based on the Divina Commedia by Dante Alighieri. The text of Wolf, in turn, comes from a different continent, based as it is on ancient texts of the Pawnee Indians. Katsu, in contrast, makes use of texts written by 6 Japan zen monks just before their death. The work deals with questions of life and death, but no answers are given. The whole work exudes a mysterious ambience, achieved through a successful combination of violin and cello, which create an atmospheric mood above which the soprano tells the story of the monks. In Katsu, Deneire employs a different musical structure for each poem. In this way it is possible for each poem separately to have the musical language most appropriate to it, thus bringing out its dramatic content to the full. The first poem is characterised by long notes in the violin and cello parts, above which the soprano sings the text of the poem. Many elements from the poem are strengthened by the singing style. For instance, the words “inhale” and “living” are sung on a glissando rising through a semi-tone, after which the words “exhale” and “dying” are sung on a descending glissando. After this, Deneire calls for two changes of metre on “forward” and “back”, creating the effects of acceleration and deceleration respectively. The music of this first poem is characterised by the presence of minor seconds. The transition to the second poem takes the form of a rising line in the soprano part, built around these characteristic minor seconds. This rising line proceeds from g to g’-sharp, again in effect a minor second. The second poem contrasts with the first because of the large leaps in the soprano part. The beginning of the third poem signals a break with all that has been heard so far. The soprano is instructed to scream and whistle the text, while the violin and the cello play short notes, pizzicatos and glissandos. The text is divided up into short fragments and repeated many times, creating increased intensity. The end of the poem works towards a climax, reached on the word “katsu”, the work’s title. This movement can be seen as the work’s central section. The poems that follow have a more intimate mood, generally remaining piano, with occasional fortissimo outbursts in the violin. The realisation of approaching death creates an oppressive feeling. The poignant words “nothing more” end a work that seems to go on floating into infinity.

Expositions is a work consisting of nine short movements, each of which forms a separate whole. They can be played directly in sequence or used individually as transitional works. The whole tells the story of suffering. Four versions of this work exist, each for a different scoring. This allows performers to choose the version that best suits the available instruments. The version considered here (sruti 9d) is scored for flute, clarinet, violin and cello. The aim is a maximum variation of instrumental combinations, tempos, playing styles, dynamics… This results in large contrasts between the movements. There is, for example, a sharp contrast in tempo and character between the first and the second “exposition”. The first movement is given the marking Adagio, while the second is marked Nervoso. The first movement is thus characterised by its many long notes, legato playing and use of mutes, all elements that underline the Adagio style. In contrast, the second movement has many quick notes, large glissandos, staccato and marcato markings and chromaticism, thus creating the nervous character prescribed for the movement. Deneire maintains this contrast throughout the whole work.

A very remarkable work is Trek, written for folk orchestra, symphony orchestra and 4 female singers. Trek is based on a traditional song, the Hagelands Verhuislied (Moving song, a folksong from Werchter, a town in the Hageland region of the Province of Flemish Brabant). The work consists of 4 movements, each constructed differently. A constant that links the movements together is the folksong present in each movement. Starting out from the folksong, Deneire wrote a contemporary scenario dealing with the 4 characters that the work is based on. Trek can certainly be called an eclectic work. In the composer’s own words: “Trek embraces a combination of styles: Flemish folk music, classical orchestration, experimental use of the voice, soloistic chamber-music passages and exploding orchestral sounds.”

Besides composing, Hanne Deneire’s other passion is the bass clarinet. This is clearly evident in the various works for (bass) clarinet throughout her oeuvre. These include Nyx, one of her first works, written for clarinet solo. The work deals with the passage of time, and in particular the experience of time as a vicious circle that passes rapidly and hastily in the daytime and slowly at night, like the disappearance of all sense of time. She has also written a duo for clarinet and bass clarinet, entitled Hemel (Heaven/Sky). The clarinet and the bass clarinet represent 2 lovers. Like a lover the clarinet melts together with the bass clarinet, sometimes to the point that it is impossible to tell the difference between the two instruments.In the work Exit, for clarinet and cello, 2 disciplines merge. For this composition, Hanne Deneire collaborated with Thomas Steyaert. While she composed the music, Thomas Steyaert produced a choreography on the theme of this work. 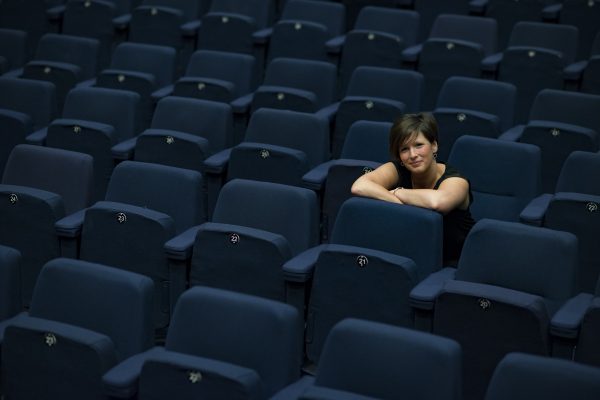