Johan De Smet is a self-proclaimed autodidact, not having studied music at the post-secondary level or with a renowned composition teacher. All the same he was greatly influenced by musical experiences encountered early on. He sang for many years in a boys’ choir (which led to his meeting Louis De Meester and Benjamin Britten), his brother was conductor of the Goeyvaerts-Consort and at a young age he was a student at the Ghent Conservatory, which did give him some basic training in music theory. It soon became evident that he was more attracted to pop music, with Frank Zappa his great hero. De Smet’s fascination for this artist and the musical “hybrid forms” that he created led to an interest in the contemporary “classical” music of Edgard Varèse, Igor Stravinsky and others. At this time he gained practical experience as a pop and theatre musician. The openness of this world appealed to him more than the traditional conservatory, where he felt that an exaggerated respect for the past created a fear of innovation and a preference for “boring music”. A life of pop music alone turned out to be somewhat one-sided and labour intensive, however, and De Smet turned his attention to repertoire for the theatre, where he began to work in the 1980s (with his first success in 1984, Het rattenkasteel (The rat-castle), based on the “Nero” comic strip by Marc Sleen). He is also the house composer for the shows, songs and sketches of Kamagurka (including the radio programme Studio Kafka, the television shows Lava 1, Lava 2 and Johnywood, and the series Bob en George) and he is an active member of the group “The Simpletones”, which parodies “minimal music” by using only three notes in its whole repertoire. Over the years, De Smet has built up a sturdy reputation as a (very productive) composer of music for opera and theatre, often commissioned by leading companies in Belgium (KVS Royal Flemish Theatre, KNS Royal Dutch Theatre and NTG Ghent Theatre).

Although Johan De Smet did in fact study harmony and composition, in his works he is not subject to any rules, prescriptions or limitations. He always sets out from a particular idea: a certain instrument, an interesting story, a character, a tradition etc. He then puts together a group of performers. Originally, the scoring was chiefly determined by the financial resources available but over the years De Smet has gradually gained almost complete freedom in this regard. In his choice of performers he shows a preference for percussion (the influence of Varèse) and voices. The choice of the instruments often has a humorous element: in De Smet’s scores there are parts for water bottles, birdhouses and the like. He has also used samples in more recent compositions. The rest of the composition process proceeds almost completely intuitively, with as sole point of reference the auditive result envisioned by the composer. This makes it difficult to give his oeuvre a particular label: for Johan De Smet, style is itself an element of style, as the composer applies various techniques and methods completely in service of the work’s content. For example, a personage can be subtly characterised by having him sing completely atonally in the midst of a tame, tonal ensemble; in the same way, certain scenes or events can also be typified using this method. De Smet can thus truly be termed an eclectic (and postmodernist) composer: on his own initiative he collects and assimilates all manner of usable musical elements and proceeds to construct something original from them. In so doing, he does not seek to avoid possible conflicts between different styles; rather, the composer goes consciously in search of the tensions that result from such conflicts. De Smet is also not afraid of experimentation, and now works increasingly with video projections or other visual innovations that support the works performed. The “children’s chamber opera” Raponsel, for example, was provided with illustrations in real time by well-known illustrators such as Herr Seele, Kamagurka and Gerda Dendooven, with the audience able to follow the whole process in minute detail.

Considering the large amount of vocal music in De Smet’s oeuvre, it is probably also useful to provide a short commentary on the texts (in Dutch, German, Latin, English and Ghent dialect) he uses for these compositions. These are usually newly written texts, requested by the composer himself from such writers as Wim De Wulf, Kamagurka or Arne Sierens. When he uses pre-existing texts, they are often drawn from a major, illustrious tradition: for instance, De Smets has composed a Requiem and a St John Passion. In addition he has composed on texts from the rich repertoire of Grimm (Raponsel) and Paul Van Ostaijen (Hartelijk, Uw; Band). Finally, for his compositions in connection with theatre productions, De Smet has inevitably taken on major texts from world literature by such authors as Cervantes (Don Quixote), Shakespeare (Richard III) and Chekhov (Vaudeville). The newly written texts are generally characterised by humour, absurdity and above all irony (example: a love duet in classic Italian opera style, the text of which turns out to be a list and description of ten different sorts of pasta). Scintillating dialogue, sharp-edged ripostes and wordplay are all important elements. The presence of a text is indispensable for De Smet’s composing process: he never writes abstract, purely instrumental music but always in function of the story or some textual component. From this starting point, the process is not linear but fragmentary, as the work “writes itself”, according to its own internal logic.

De Smet occasionally and often only half-consciously inserts small echoes of familiar-sounding passages into his works: for instance, in Comanchero Tanzanica, the melody descends by an octave on the words “Don Giovanni”, or he cites the song “You’ve Got a Strange Effect on Me” by Dave Berry for a passage which is a free translation of this text into Dutch (“Jij hebt iets heel aparts over jou”). These subtle references, rather than being gimmicks or witticisms, are intrinsic to the organic process through which all De Smet’s compositions are created. His experience as a pop musician is certainly crucial in this connection, allowing him to keep an open mind in relation to all the possible historical and contemporary musical currents and to select elements that seem to him appropriate for a particular task at a particular moment.

Johan De Smet’s latest project is a so-called “giant opera” in the West Flemish dialect (Urt!), for open-air performance. Each of the three giants will have his own chorus and orchestra, allowing for musical differentiation between them. The figures set out from three corners of a village square, coming together in the middle; this process is repeated four times but the story proceeds differently each time, according to the time-honoured soap-opera concept. Here too the point of departure was not abstract music but rather a concrete theatrical idea: the giant as super-human force and imposing figure from a centuries-old tradition that is not restricted to old Flemish folktales but which extends back as far as classical Greek tragedies. Accordingly, this opéra-gigantesque will be performed as a ritual ceremony. 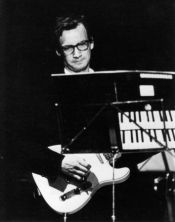