This composer, film director and percussionist was born in Brussels in 1956. De Mey’s meeting with Henri Van Lier, professor at the IAD (a Brussels film school), was to be the catalyst for his music and film work. One aspect of Van Lier’s lessons has stayed with De Mey throughout his career: artistic engagement should be supported by an interest in mathematical structure. Van Lier introduced De Mey to the music of Steve Reich. Reich’s rhythmic shifts, the clear structure and the chaotic sounds of the city formed important sources of inspiration for De Mey. His meeting with Fernand Schirren, a percussionist with the Ballet of the Twentieth Century, was a second determining factor for De Mey’s artistic development. He met Schirren through his sister Michèle-Anne, who studied dance at the Mudra, Maurice Béjart’s ballet school. Schirren had a worked-out vision of rhythm and movement: rhythm as movement. His “philosophy of rhythm” was embedded in the duality of two onomatopoeic words in Dutch, the “hé” (pronounced “heh” and roughly equal to the questioning or incredulity of the American word “huh”) and the “boem” (pronounced and meaning “boom”). The “hé” refers to the beginning of the rhythmic movement, the leap, the arc and by extension the difference. The “boem” refers to the point of arrival, the point of rest, and by similar extension, the division. On an aesthetic level, this vision leads to an insoluble tension between these two poles. It hinders both the repetitive and the loss of each orientation-point by means of the constantly different, which took a central place in serialism. This theory made a strong impression on Thierry De Mey, who continues to hold fast to the principle of refusing to see rhythm as purely a combination of lengths within a temporal scheme. After his studies at the IAD – De Mey has also produced a number of art films – and his percussion lessons with Schirren, De Mey made his debut as a composer with Rosas danst Rosas. He wrote this first work in 1983 for Anne-Teresa De Keersmaeker, the choreographer of the dance company Rosas. De Mey composed most of his musical works in collaboration with choreographers or for the group Maximalist! (1984-1991), which he founded with Peter Vermeersch. He was also one of the founders of the Ictus Ensemble, a Belgian ensemble for contemporary music which has premiered many of his works. De Mey’s music has also met with acclaim internationally: his works have been performed by such groups as the Hilliard Ensemble, the London Sinfonietta, the Orchestre Symphonique de Lille and the Arditti String Quartet. His Suite pour violon solo (1993), composed for the Festival Octobre en Normandie, was dedicated to Irvine Arditti, first violinist of the quartet of the same name. The music and films of Thierry De Mey have won numerous national and international prizes, including: the Bessie Awards in New York, the Forum des Compositeurs de l’Unesco, Eve du Spectacle, the prize for the best Belgian short film at the 1999 Flemish Film Festival in Ghent for his film Musique de Tables, the prizes for best director and music at the Grand Prix International du Film de Danse in Nice and the Dance for the Camera Award at the Moving Pictures Festival in Toronto in 2000. In 1998 De May was also guest composer in Fresnoy and was house composer at MUSICA 2001-2002 in Strasburg.

The central element in De Mey’s compositions is movement. Musique de Tables (1987) is a representative example of this sense of movement. The composition is for six hands on three tables. The three percussionists have only the table as an instrument and perform various movements with both hands, from simple actions such as “le plat” (striking the table with the palm), “le revers” (touching the surface of the table with the back of the hand), “le trenchant” (a sort of karate chop), “la dactylo” (parallel rubbing motions of the wrists over the table) and “les essuie-glaces” (wiping motions with the underside of the arms) to circular movements and more pianistic techniques such as “arpèges” and “les one-finger-Pianist” (pretending to strike the keys of a piano with a finger, but then in different places on the table). De Mey characterises each action with a name and a symbol, adding the complete repertoire of symbols to the score as a kind of legend. The intended variation in sounds is notated by De Mey in a score in which a “staff” is provided for each hand, similar to a piano score. The positions of the hands and the moving figures are a sort of formal language that can be compared with a dance choreography, with the difference that the visual aspect is directly related to the musical and vice versa. With this composition, De Mey explores the boundaries between music and the movement that this music produces and makes audible. It comes then as no surprise that De Mey has collaborated with Belgian choreographers. He has chosen to produce mostly functional music. Since musical principles need to be brought to life in a way which is also useful, De Mey has opted for composing in dialogue with other disciplines. This has resulted in works mainly for dance or film. The composer states that there is a clear starting point for his compositions in these concrete situations: the music must be danceable or useful in the editing of film. During the process of composing, dance and film function as buttress. This goes hand in hand with a scepticism for total serialism – he speaks of “composers who play Tetris with note-duration and pitches” – and other overly-stringent artistic ideas, including psychological or political irritations, philosophical ideas or mystical beliefs.

De Mey’s collaboration with choreographer Anne-Teresa De Keersmaeker resulted in the ballet and musical suite Rosas danst Rosas. This work of art can be seen as a glorification of the body, in resistance to mathematicisation. This is in fact a political attitude revealing the extent to which the tangible existence of the body is increasingly being forced into a rivalry with machines. De Mey and De Keersmaeker create a tension between a cold, predetermined form and the physique of the (female) dancers who constantly repeat a number of figures. The structure is a sort of sadistic master that coerces the bodies, insisting on a rapid tempo. The choreographic vocabulary is, however, dominated by the desire that is expressed in sexual attitudes. The strict form thus becomes a structural wall that the dancers keep running into. The ensemble dances in geometrically repeating patterns. In the foreground a soloist repeats De Keersmaeker’s minimal dance, which is based on the actions of straightening out a t-shirt, making fists or running hands quickly through the hair. These gestures from everyday life determine the rhythm and the choreography. These movements are complemented by De Mey’s musical language, which is based on a simple, repeated rhythm of crotchets in unison, in which the original melodic shape of four pitches is used in different combinations and shifts within the bar. This basic process is in turn varied a number of times by changing the pitches. This interest in infiltrating an organic form into a logical machine-form was a critical factor influencing De Mey’s first works. The composer states that his first works played with the rhythm based on figures, where each figure represented a certain quality of the movement, a sort of motorial state of the body, or a dance step. Thirteen years later, De Mey filmed Rosas danst Rosas in the empty RITO School in Leuven. This architectural monument with its austere geometric forms, built in 1936 by Henry van de Velde, was perfectly suited as a décor for the work. Architecture, dance and film are thus woven together into a sort of Gesamtkunstwerk.

Movement is also the most important aspect in De Mey’s purely instrumental music. He sets out to find a way of making acoustic models move. Kinok for an ensemble of twelve musicians, written in 1993-1994 for the Ictus ensemble, takes its title from the Russian word for the movements of the eye. This work invites the possibility of following the evolution of different images simultaneously. In concrete terms this entails an interplay of superimposed accelerations and decelerations performed by the different instruments. These accelerations and decelerations are created by juxtaposing widely differing note-values (e.g., demisemiquavers and semibreves) concurrently or successively.

In Amor constante más allá de la muerte for an ensemble of six musicians and electronics, on choreography by De Keersmaeker (1996), the two artists find inspiration in the forms of spirals and waves. They go in search of equivalents from the worlds of sound and dance. De Mey’s score is striking for its “quasi-imitative” technique reminiscent of the music of Steve Reich and Philip Glass: the musicians play the same material in a minimal phase shift. Characteristic for De Mey is that the authentic material of each voice as it enters is varied rhythmically by the other voices. In this way, the composer avoids both the repetitive and the constantly changing, instead creating a balance between the two.

The collaboration between De Mey and De Keersmaeker was celebrated in 2003 with Counter Phrases, a film evening with live music. Ten short films by Thierry De Mey were set to music by ten composers, forming the basis for ten choreographies by Anne-Teresa De Keersmaeker, danced by her company Rosas. One variation was produced by each composer: Georges Aperghis, Thierry de Mey, Robin de Raaff, Luca Francesconi, Jonathan Harvey, Toshio Hosokawa, Magnus Lindberg, Steve Reich, Fausto Romitelli and Stefan Van Eycken. De Mey and De Keersmaeker have worked together for 20 years, striving for variation, a continual creation of algorithms, formulas for adapting movements towards dance and the physical. Besides the collaboration with De Keersmaeker, De Mey also entered into a dialogue with Wim Vandekeybus, starting in 1987. Together with this choreographer he realised such projects as What the body does not remember, L’ombre de l’avion (a short theatre work performed by De Mey, Josse de Pauw en Wim Vandekeybus), Les porteuses de mauvaises nouvelles and Le poids de la main en Roseland. 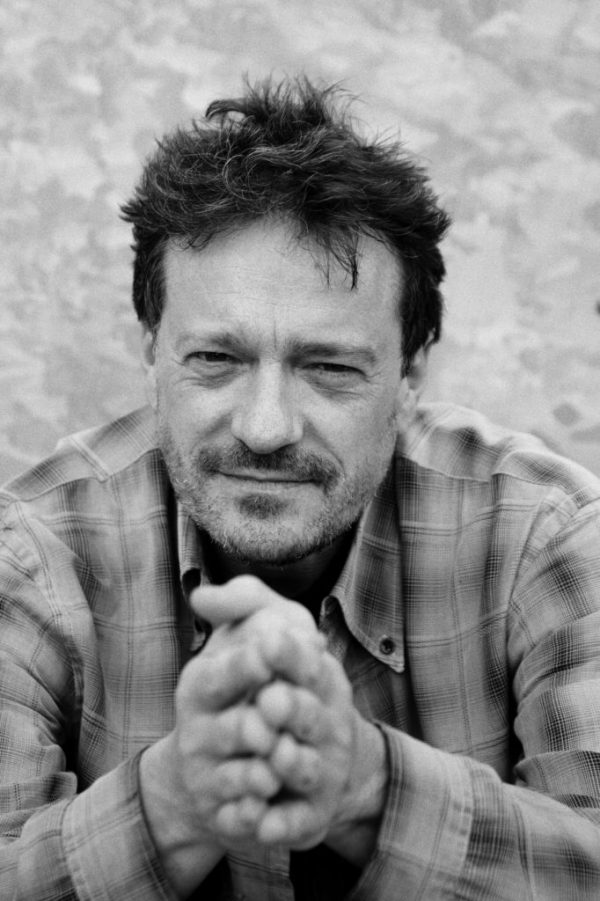