Boudewijn Cox was awarded diplomas in guitar, chamber music, harmony and counterpoint from the Lemmens Institute in Leuven, where he pursued advanced studies with Luc Van Hove (composition) and Christian Vereecke (fugue). As a composer he has received various prizes: Hommage à Ohana (the compulsory work for the semi-final of the International Guitar Competition Printemps de la Guitare – 1994 in Walcourt) won him first prize in the composition competition for classical guitar held by BAP SABAM. He won the Prometheus Prize in 1995 with his Octet for woodwind ensemble. Onyx for orchestra was awarded a “highly special commendation” in 1997 in Vienna, at the Vienna Modern Masters 6th International Orchestral Recording Award Competition, and a year later Cox won the Youth and Music Prize for Composition in 1998. He became familiar to a wider audience with his Prelude for piano, which was chosen as the compulsory piece for the semi-finals of the 1999 Queen Elisabeth International Music Competition.

Cox composes almost exclusively on commission. In 2002 the Flemish Radio Orchestra premiered his Tableau in the Cultural Centre in Hasselt, with additional performances in De Bijloke in Ghent, De Spil Cultural Centre in Roeselaere and Theater aan de Parade in ‘s-Hertogenbosch (Holland). In the same year, Equinox for piano, commissioned by the American pianist Jenny Lin, was performed in De Rode Pomp in Ghent, the Flanders Festival in Mechelen and New York’s Carnegie Hall. Boudewijn Cox teaches at the music academies in Wemmel and Beveren.

While composing pop music and jazz, Boudewijn Cox became interested in composing “classical” music in around 1989. He considers his compositions up to the Prelude for piano (1999) more as studies, in which he is searching for a personal and consistent musical language. Ravel, Bartok, Berg and Schönberg were initially important sources of inspiration, especially for orchestral colours. The two-part Onyx (1994-96) is his first orchestral quest for mastery and coherence in his compositional language.

To arrive at the melodic and harmonic basis for his String quartet (1997) Boudewijn Cox experimented with a few acquisitions from the pitch-class-set analysis of Allen Forte. The 1999 Prelude for piano is the first composition in which a consistent harmony, and thus a satisfying result, was arrived at using this analytical perspective. Since 1999 he has systematically used this system in all of his compositions. This set theory provides the composer with the means to explore the intervallic content of a variable tone collection (usually eight notes with Cox). Via transposition and inversion, he then explores the relationships between them to create a family tree of related sets with the relationships he has created. These tone collections, which function as melodic and harmonic raw material, give the listener structure and reference points due to their interrelationships. This shows a great similarity with the tonal mechanism; various tonalities are derived from each other using the circle of fifths and thus form a network of mutual relations. In his works for smaller forces, the composer often uses a perpetual motion machine with a few tones from a set, over which a subtle melody unfolds with the other tones. Obvious examples of this are Prelude and Passages for 10-string guitar (2000).

Cox attaches a great deal of importance to well-ordered form. In this he shows a great affinity with the Classical-Romantic tradition: motifs are audibly compressed, expanded and repeated, and fit in traditional macro structures such as the ABA’ form in the case of Prelude. This enhances communication with the listener, who in his aesthetic is the focal point. Staying within this framework, in Equinox (2002) for piano he also experiments with time-honoured concepts such as tension and release. He does so both in the larger wholes by following a hectic first section with a lyrical and meditative closing, and in the smaller segments by alternating dissonances with more consonant intervals. The harmony remains atonal, however, but tonal elements are certainly not avoided.

What the composer precisely seeks to convey to the listener is a blueprint of himself. He tries to achieve this with a poetic language focussed on expression. Technique is, as earlier said, only an essential medium. This does not alter the fact that he sees a great challenge in the permanent renewal of his musical language and even this, regarded in terms of his artistic ambition, he considers an imperative claim. Composing is thus for him an eternal quest for something continually different; every satisfying solution to a compositional problem simultaneously creates a new challenge to change. He accordingly resists serialist schools, which he accuses of being slaves to their own compositional techniques and therefore risk degenerating into clichés. By employing a set he thus avoids the strict rules of serialism, such as adhering to a strict sequential order, which he sees as restricting creativity and expressiveness.

While Boudewijn Cox primarily creates unity in works for smaller forces through thematic-motivic elaboration, in his orchestral works he works to a striking degree with timbre as a structuring element. Cox is accordingly a virtuoso orchestrator with a fine sense of sound-colour combinations. His piece Da Una Certa Distanza (1999), with its subtly shifting clouds of sound, is clearly in the Ligeti mould; a very slow melody is blurred by the various voices’ changing pitch each at a different point. Then the tempo is accelerated, making the soundscape towards the end strongly reminiscent of the micropolyphony in Ligeti’s Atmosphères.

A clear illustration of Boudewijn Cox’ permanent pursuit of innovation is his piece Tableau (2002) for orchestra. In this work he takes on the challenge of linking harmony and sound colour to each other using what is called “spectral harmony”. He sets an overtone over every tone in the melody, which sounds with a given instrument and determines its colour. This way he attempts to come as close as possible to the timbre of that instrument. Since in every colour certain overtones are louder and others softer, he uses different dynamic indications in the various voices to get the right balance. The great challenge for the composer and for the orchestra is to imagine the specific timbre as precisely as possible. Towards the end, the piece develops into a highly dynamic and dramatic whole, in which very obvious motifs alternate with blurring effects such as pounding clusters strongly reminiscent of Ligeti. 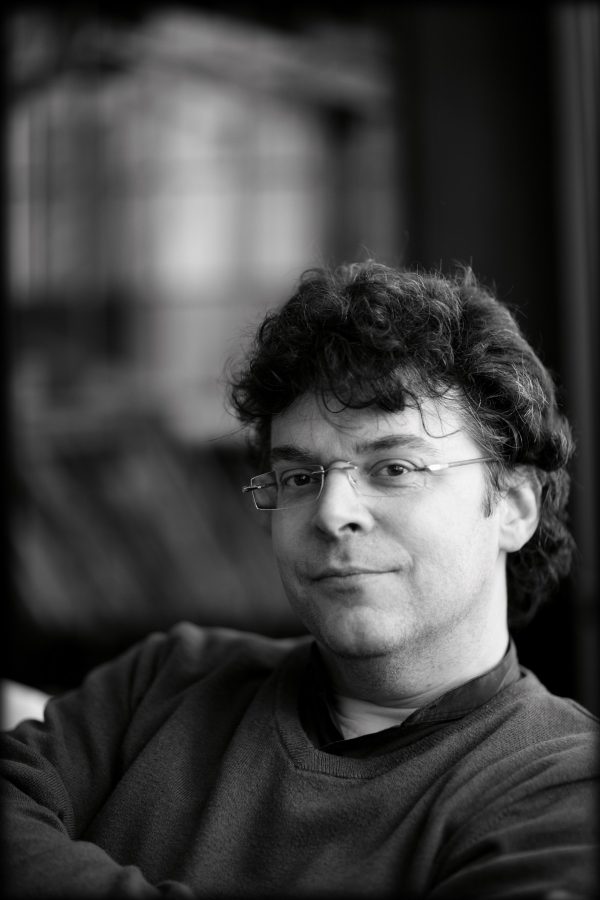