Ludo Claesen was born on 22 March 1956 in Genk. He studied music at the Lemmens institute in Leuven and at the Royal Conservatory in Antwerp, taking percussion, notation, pedagogy, composition, and choral and orchestral conducting. At present, Claesen teaches notation and orchestral playing at the Lemmens Institute and choral conducting and choral singing at the Maastricht Conservatory. He is a versatile guest conductor with orchestras and choirs in Belgium, the Netherlands, Germany and Ukraine, and is the permanent conductor of ensembles in Hasselt, Eupen, Masstricht and Kerkrade. He has received numerous awards for his work as a composer. In recognition of his endeavours and his accomplishments in the cultural sphere he received the 1995 Gulden Spoor prize from the province of Limburg, the Bisschoppelijke onderscheiding (Episcopal distinction, 2002) and the Silberne Kulturehrennnadel of the Government of the German Community of Belgium (2003).

Ludo Claesen’s training as a choral conductor and a percussionist have led to a great predilection for both the vocal and rhythmic aspects of music. For Claesen, works of music always emerge from a vocal conception. He sees music as a universal language that can be spoken by everyone. Vocal music thus occupies the most important position in his whole repertoire, including a capella works (e.g., Rorate, Jubilate Deo), choral works with organ or piano accompaniment (e.g., Missa Prima, Missa Universum), choral works with chamber orchestra (e.g., Salve Regina, Mijmeringen) and works for choir and symphony orchestra (e.g., Psalmus 112, Missa pro Navitate Europae). His vocal works are characterised by careful attention to text and rhythm. He even frequently applies counterpoint to rhythmic nuclear-cells. Thus each part has its own autonomy on a melodic and rhythmic level. As a result, he disrupts the metre while maintaining a clear pulsation based on the word accent. To this end, in all his religious works Claesen returns resolutely to the wellspring of this prosody: Gregorian Chant. The aim is to reconcile words and music on the basis of the right text accentuation. Besides text comprehensibility, Claesen also attaches great importance to the text expression. Psalm texts often form the point of departure because of their expressive possibilities. The most representative example for his sacred vocal music is Psalm 112 (1993), written for mixed choir, brass quintet, marimba and tympani. The work gains its great sense of unity through the alternation of the vocal and the instrumental elements. The whole has an archaic feel through the use of 3 modes, repetitive elements and speaking choruses. Psalm 112 can be divided into three sections, where the two first text fragments (eulogy and sunrise) grow towards a climax. For the third section, Claessen makes use of a fugue, a compositional form suggested to him by the text (“Excelsus super omnes gentes Dominus”): just as the Lord is exalted above all people, the fugue is the form for creating a strong musical emphasis for this text. Throughout the work the general mood fluctuates between certainty and uncertainty. This instability is strongly characterised in harmonic terms through the combination of the old church modes (Aeolian, Phrygian and Lydian) or through regularly concluding on a chord without a root note. Here Claesen is suggesting that each person must interpret their belief in their own way. The melodic movement often consists of seconds and fifths, in a clear reference to Gregorian Chant. Psalm 112 is fairly classical in its form, but is innovative in its orchestration and in the interaction between the vocal and the instrumental elements. The marimba is here in fact an extension of the human voice. Other religious works with an archaic character are Rorate (1995), Salve Regina (1996) and his Missa pro nativitate Europae (1994). The first two works are based on their respective Gregorian melodies, which are sometimes literally quoted (at the beginning), sometimes paraphrased. The Missa pro nativitate Europae (1994) is a concert mass for choir, soloists, and orchestra, modelled on the Krönungsmesse by Mozart. The Kyrie is based on archaic-sounding progressions in a litany style. The main theme is constructed out of 6 notes representing the six countries to which the title of this work refers. In the through-composed Gloria, there is interaction between choir and orchestra. The Sanctus is very sharp-edged with its 7/8 metre and driving rhythms. A slow introduction in the cello leads to the Benedictus, which then proceeds very melodically. The Agnus Dei is built on an aba structure, and once again the melody predominates. In the Dona nobis pacem, there is a plea for peace, musically expressed in the choir as it alternates with the four soloists who sing in chorale style. The musical language remains tonal and accessible, with great attention to the melodic development and the rhythm. The function of the orchestra is chiefly to create colouring.

In his secular vocal works, Claesen uses French and Dutch texts and tends towards smaller scorings. He has written a number of songs (including Enige mijn (My only), Ombre de mon amant) and two works for chamber orchestra and choir, both on texts by Bouwdewijn Knevels. The music, like the poetry, is transparent and playful. A nice example is the work Ballade (1989), which includes many repetitive elements closely allied with words (e.g. “hakkelen” – stammer – is declamatory) or text fragments (e.g., “ja als ze zingen” – yes, when they sing – is lyrical).

The chamber music of Ludo Claesen has a great diversity of scorings, with a predilection for interesting combinations of timbre and an important role for percussion instruments. A work in which he uses only percussion is Exchange of Thoughts (1995). Rhythmic and melodic cells are here motivically developed, like the myriad thoughts that confront us as they flit through our minds every day. This symphonic principle (underlining the importance of orchestration and motivic development) explains the title, Symphonic description for percussion-orchestra. The rich and diversified percussion scoring is an ideal medium for representing ideas of abuse, violence, love, and all manner of stimuli. Another work in which the percussion plays a very prominent role is Impressions (1987) for saxophone quartet and percussion sextet. Of major importance in this work are the fantastic colour combinations made possible through the saxophone quintet (S/A1/A2/T/Bar) and the six percussionists on marimba, tubular bells, glockenspiel, congas, and small percussion instruments (including tambourine). As usual, rhythm takes a central place. Usually it is a question of contrasts, but sometimes the accents fall together in both families. The various sections are also strongly contrasted, ranging from very lively to extremely introverted (e.g., intimo e divoto). This opposition is maintained right to the end: after a very playful jazz fragment, the work concludes definitively with a solemnly intoned homophonic fragment. A more accessible chamber-music work is the saxophone quartet Quatre Miniatures (1997), a suite in four movements, each with its own theme. The first movement is written in aba form and has a cantabile middle section. This is followed by a Rondesque with a melody in the Lydian mode; there are also many changes of metre, creating a rhythmic drive within the alternation of verse and refrain. The third movement is an Elegy in 3/4 time, and is very impressionistic in mood. The main theme is in the soprano saxophone and is accompanied harmonically by the other instruments. The work concludes with a Hungarian dance in which a rousing rhythm sets the tone. The harmony in this movement is quite traditional. Suite Ancienne (1996) for string orchestra and percussion contrasts with Claesen’s simpler works. This work is a nice example of his most progressive chamber-music style. And yet it is clear how Claesen seamlessly connects his own musical language with tradition, ultimately arriving at a combination of the modal and the tonal. The tonal is in turn broadened by the combination of major and minor tonalities. In terms of auditive perception, these different combinations strike the listener as very logical. Moreover, Claesen often combines this personal harmonic language with old techniques. In this suite, for instance, he combines Baroque dances with a motor-like rhythm.

Claesen’s Fantasy for orchestra (1997) has a singular place as his only orchestral work. It cannot be termed purely abstract symphonic music, however, as it is based on texts by Wouter De Bruyne. For this reason, he chooses the subtitle, “five symphonic impressions”, once again demonstrating Claesen’s predilection for the combination of text and music. 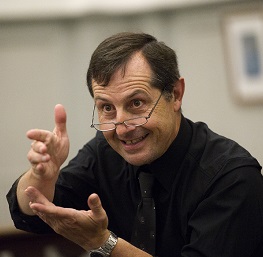