Erika Budai was born in Tienen on 12 August 1966. She studied piano at the Lemmens Institute in Leuven with Levente Kende and earned a first prize in solfège. From 1990 she studied at the Royal Conservatory in Brussels, where she received a first prize in harmony, a diploma in music education, solfège and music history, and a diploma for electronic and film music (with W.C. Rothe). She completed her education as a composer at the Lemmens Institute, studying counterpoint and fugue with Ludo Claesen and composition with Piet Swerts. A grant awarded by the A. Töpfer-Stiftung enabled her to meet leading composers in Darmstadt, including Karlheinz Stockhausen and Wolfgang Rihm. In both 1992 and 1993, she was a prize winner in the “Young Composers” composition competition. At present she has some 120 compositions to her name, most of which are for choir. She has already produced numerous works as commissions, for such organisations as the Flemish Radio Choir, the Flanders Festival and the Leuven University Choir. She has also written in lighter genres, providing songs and arrangements for such artists as Jo Lemaire and Johan Verminnen. Erika Budai is also active as a choral conductor, jury member and teacher of harmony and elementary composition at the Municipal Conservatory in Leuven.

Erika Budai’s list of compositions reveals a definite predilection for choral works. In her instrumental work, the piano, the flute and strings take a central place. In all her music, Budai looks for a balance between homophonically worked out passages on the one hand, and polyphonic and imitative settings on the other. One motivic element can sometimes dominate a whole composition. In her String Quartet no. 1, the first and second movements both begin with the same melodic material, but in very different contexts. The harmonies are much more daring than in her vocal works. In this whole string quartet there is hardly one perfect triad or tonal relationship to be found. Rather, the harmony is dominated by tetrads in which fourths (perfect and augmented) and seconds predominate, giving this string quartet a strongly Hungarian and Bartókian feel.

This composer’s works maintain a clear structure and a transparent internal form. Slow lyrical passages alternate with rhythmically driving constructions. Metrical alternations and a preference for irregular time signatures (5/8, 7/8) once again betray Hungarian roots. A frequently used technique is a continuous, underlying rhythmic flow above which a thematic shape can be developed. In Mauve-ments, for example, the piano begins with a semiquaver ostinato figure above which the flute presents a clear, symmetrically constructed melody in the whole-tone mode. This ostinato is quickly replaced by a new semiquaver ostinato figure in the piano, but clearly in an articulated 5/8 metre, once again accompanied by a new melodic element. The opening theme returns in bar 34.

Budai’s choral oeuvre is much more extensive than that for instruments and includes works for a wide range of settings: children’s choir, women’s or men’s choirs, 4-voice mixed choir and works for 3 equal voices. She has written both short works and more extensive cycles. The choice of texts similarly shows a wide range of variation: both sacred and secular, in Dutch, Hungarian, English, German and Latin. She often writes her own texts. We find the same clear sense of form here as in all her instrumental works. The harmonies have tonal origins, but are often “coloured” by, for example, accidentals, added seconds and sevenths. For the concrete working out of a vocal composition, Budai finds inspiration above all in the content of the text. Het glazen narrenschip (The glass ship of fools) is a cycle built around 9 poems by Paul van Ostaijen. The overarching structure is a bridge-form: in compositional terms the first movement is developed similarly to the last, the second to the penultimate, and so on. In the middle is Oude bekenden (Old friends): a rhythmically worked out speaking-choir full of special effects such as glissandi, quotation-techniques and “body percussion” (clapping hands, stomping feet, striking the chest with the hand). The theatrical aspect also plays a role here: in the arrangement of the choir, the high women’s and men’s voices are placed directly opposite the low voices. They look straight ahead, except when text is spoken, in which case they look at the audience. Examples of sound-painting can be found in this cycle. On the text “langs het hoogriet” (along the high reeds) there is a rising interval, with a falling interval on “langs de laagwei” (along the low meadow). “Kringetje” (a little circle) is represented by a chromatically circling figure. Musical quotations are also suggested by the text. Thoughout the third movement, Onbeduidende Polka (Inconsequential Polka), fragments from the folksong Juffrouw wil je de polka leren (Miss would you like to learn the polka) are interwoven. A short Silent Night fragment turns up in the central movement on “het stalleke van Bethlehem” (the cowshed of Bethlehem) and in the sixth movement (Land mei – Land May) Bernstein’s famous “Maria” motif (f-b-c’) is heard on the word “mariamaand” (Mary month).

Although present in just about all her works, an element of humour is especially evident in works on her own texts. Her text for Carolus Imperator is written in “schoolboy’s Latin” and her Chocolate Factory is one big advertisement for the Belgian chocolate industry. Sounds of earth is a cycle around the theme of earth, which she has associated with a basic universal rhythm through the use of spiritual symbolism. The percussion thus plays an important role throughout the eight songs. As soloist she has chosen a bass, who because of his low, dark timbre brings to life the sound of the theme, earth. The fact that each movement calls for a different choral set-up is a result not so much of visual considerations, as of auditive-spatial intentions. 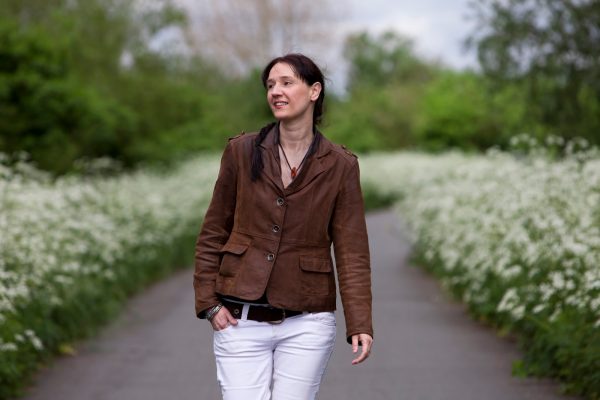