At present, Kurt Bikkembergs is choir director and assistant in notation, composition and choral conducting at the Lemmens Institute, and conductor of the Capella di Voce. He is also a regular guest conductor with the Flemish Radio Choir. Since 2002, Bikkembergs has been artistic director of the chorus of the Flemish Opera and together with Willem Ceuleers has shared the function of choirmaster at the cathedral in Brussels. He regularly leads productions and courses for such organisations as Muzikamp, the Flemish choral federations, the St Gregory Society (the Netherlands), the Katholieke Universiteit Leuven and the Belarusian University of Culture in Minsk. His compositions have won numerous prizes, including the Mayor P. Meyers Prize (Hasselt, 1991), the Cera Youth and Music Prize for Composition (1993), the Waregem Vocal Composition Prize (1994) and the Gulden Spoor (2003).

Until 1986, Kurt Bikkembergs composed in the tradition of Flemish Romanticism. A turning point in his musical life was formed by his participation in the Internationale Chorakademie Krems in Austria, where he received instruction from Heinz Kratochwil. Im Nebel (1987), on a text by Herman Hesse, confirmed his new style. The modal language gave way to free atonality, with colour chords as “leading theme”. This new harmonic language underwent few transformations in the succeeding compositions.

The most common phenomena are free harmonisation, pedal notes and layering of chord-constellations, creating more complex sound structures. An exception to this trend is formed by the ten 16th- and 17th-century chorale melodies, in which the composer underlines the religious character by writing tonally in a generally homophonic style. Starting in the 1990s, the composer became captivated by the idée-fixe of acceleration, which he translated into music through the use of compound and asymmetrical time signatures and alternating metres, which disrupt the metrical regularity and suggest a pulsating rhythm. In Altomobiel for viola and piano (1992), this tendency is worked out fully. Movement and directness are suggested by metrically and melodically varying an octotonic aymmetrical basic motif of 8 quavers in a quasi-rondo style. In the Missa in honorem Sancti Norberti (1993), a traditional setting of the ordinary for mixed choir and organ, interwoven with psalm texts on St Norbert, the Gloria is characterised by a strong rhythmic drive with polyrhythmic passages, resulting in a grandly-conceived field of tension throughout this whole song of praise.

The idea of the story is also expressed on the formal level. In vocal works, the construction is mainly based on the text, in which the linguistic structure determines the musical, syntactical structure. The alternation and application of syllabic and melismatic text underlay, the establishment of contrapuntal techniques and harmonic alterations, changes in the scoring, the working out of aleatory and strictly metrical passages, the addition of dynamic shadings, the use of madrigalisms and text painting and the use of “extended performing techniques” – these are the main elements that create continuity, diversity and the specific mood of the composition.

Bikkembergs’ ability to conjure up very specific moods is exhibited in his choral compositions Suite (1996) and Aanwezigheid (Presence, 1998), based respectively on poems by the Dutch-language poets, Gerrit Achterberg and Paul Van Ostayen. In Aanwezigheid, the feelings of the poet for his beloved are worked out by Bikkembergs on all levels. The lyrical, dreamy character of the poem is musically expressed by a modal pitch set and the use of aleatory passages. The even, soft dynamics and the accenting of the women’s parts meticulously complete the concept. In the expressionist poetry of Paul Van Ostayen, the human aspect is often conveyed in a carnivalesque way with experimental sentence structures, which Bikkembergs gives a predominantly rhythmic accentuation. In most of his works he employs an expanded tonality in which single-voice and multi-voice homophonic and canonic passages alternate with one another. Typical for this collection is the musical expression of the piano dances mentioned in the titles (Charleston, polka, waltz, Polonaise). In the penultimate movement, Polonaise, the composer incorporates two quotations from the folksong Ik zag Cecilia komen (I saw Cecilia coming), which is explicitly cited in the text.

One of the highpoints of Bikkembergs’ career to date is undoubtedly the nine-movement oratorio Mirjam for soprano solo, mixed choir and girls’ choir, strings, organ, piano and percussion (1996), the form and structure of which, as in his other vocal compositions, is based on textual sources. The libretto, which was compiled and written by René Geldof and the composer himself, describes Mary’s life, from her birth to her coronation. As an oratorio Mirjam is an authentic representation of the genre that arose in the 17th century: an extensive musical setting of a sacred text, in which dramatic, narrative and contemplative sections alternate with one another. Throughout the composition, the music serves the word, whether by “dramatising” the emotions or by text painting. For instance, in part 1 (Flos de radice Jesse) the sung passage on the dancing Mary is musically accompanied by a tambourine and metrically accentuated by an alternation between a compound and an irregular time signature (6/8 and 7/8 respectively). In part 2 (Ave gratia plena), the angel descending from heaven is represented in sound by fugal entries, while the magnificence of the message is visualised by the physical movements of the sopranos and altos (who leave the stage to surround the audience). Besides his use of text painting, Bikkembergs very inventively dramatises the emotionality, as in the spiritual awakening of Mary in part 5 (Et invenerunt eum) with its long climax, the vocal scoring of which at its highpoint consists of 2 choirs and a soprano accompanied by a recurring, asymmetrical, unison tension-motif in the strings and piano, with long notes in the organ.

Within some of Bikkembergs’ instrumental compositions as well, reference is made to texts. In Apocalypsis for brass ensemble (1997), passages from Revelation are programmatically worked out, and in Romania – a four-movement symphony in preparation – the composer’s personal experiences of the developments in Romania during and after the Ceaucescu regime are described. In De wens van de wind (The wish of the wind, 1994), ballet music for ten instruments, the ensemble paints the words and feelings of a narrator. In this tragic fairytale, the natural situations (a storm), events (a dance), and characters (a boy and girl) are all musically depicted, with as apotheosis the contrapuntal fusion of three different motifs. In absolute instrumental works such as Sebastiaan, for carillon (1992) and Thoughts for tenor saxophone and band (1995), the form is determined by other principles. The structural element in Sebastiaan is a soggetto cavato da vocali, a theme derived from the vowels and consonants in the title, which returns in various guises, out of which other melodic patterns are distilled and which functions both as leitmotif and harmonic bass. In Thoughts, there is something of a reference to the Vivaldian solo concerto, through the alternation of ritornelli and quasi-solo fragments, an increasing virtuosity on the part of the soloist in the various solo episodes, and the echo-like dialogues between the soloist and the tutti. 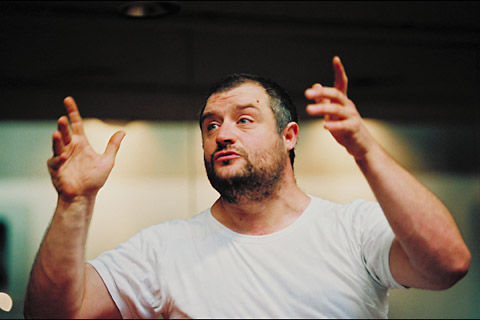