Valentijn Biesemans was born into a musical family on 9 August 1968 in Antwerp. His father, Janpieter Biesemans, was the director of the Academy for the Musical Arts in Meise and a teacher at the Royal Conservatory in Antwerp, and was himself a composer.

Valentijn Biesemans began studying the cello at the Academy for the Musical Arts in Meise, where he graduated with a “regeringsmedaille” for cello. He continued his studies at a secondary school for the arts, studying with Steven Caeyers, and subsequently at the Royal Conservatory in Brussels, where he studied cello with Carlo Schmitz and Viviane Spanoghe, and chamber music with Florent Vandevondel. He also earned teaching diplomas for both cello and chamber music. At present he teaches cello and chamber music at the music academies of Meise and Zottegem. Biesemans is the driving force behind the ensemble Grupetto, which he founded in 1989. This ensemble is specialised in musical-historical projects. For one such project, the group made a reconstruction of the music actually played on the Titanic. Valentijn Biesemans has himself also written several works for this ensemble, including Blighty Blues and Dulce et Decorum est for the In Flander’s Fields programme.

Leading characteristics of Valentijn Biesemans’ compositions include a clear preference for free atonality and the use of ostinato patterns. The composer also frequently works with a rich pallet of string-playing techniques, an approach which is no doubt the result of his training as a cellist and his activities as a cello teacher. Although he sees emotions as his main source of inspiration, he also likes to use such principles as letter-systems, and his works have a tight structure with horizontal, vertical and diagonal links. At the same time, such techniques are always put at the service of musical expression. Capriccio interrotto (1994) is a short work for oboe and 2 (B flat) clarinets with an expressive, chromatic character. The “interrotto” element is the result of frequent changes of metre and the use of syncopation. The work is divided into 5 segments with a free-ostinato structure, resulting in abrupt transitions which tend to coincide with the metre changes, thereby strengthening the sense of “interruption”.

Another composition that reflects its title is Dialoog for 2 cellos (1994). The 2 parts of this work, which is also fairly short, are closely connected through the exchange of melodic material and through a canonic passage. This work also features ostinato elements, heard in the open-fifths accompanying figure with which the second cello opens the work. This ostinato is picked up and further developed by the first cello several bars later. The work is characterised by a number of different string-playing techniques, such as pizzicatos (in the left hand as well), long glissandos, saltando and col legno battuto (hitting the string with the wood of the bow).

Kreet (Cry) op. 4 (1994) for cello and piano is a highly expressive work in which the cello plays a very prominent role as soloist – in contrast to the very austere piano part – a characteristic that reflects the fact that the work was written as the compulsory work for a cello exam. Kreet is clearly chromatic, with many minor seconds and sevenths in both the harmonies and the melodies. Another dominant interval is the open fifth typical of string instruments, sometimes transformed into a triad through the addition of a third. Once again, the abundant use of pizzicatos, glissandos and flageolets are characteristic both of this composer and of a work intended for a cello exam.

A larger work, both in its size and scoring – is the String Quartet no. 1 op. 2, which was written between 1988 and 1990. This work exhibits a number of significant characteristics found in later compositions, including free atonality, the preference for the expressive use of chromaticism and the presence of ostinato patterns. This string quartet is based on three poems by Adelheid De Smet, to whom it is dedicated. The poems are printed in the score and provide the names for the work’s three movements. The first movement, Vlokken (Flakes), is slow, with many changes of metre. These changes do not, however, occur simultaneously in the different parts, resulting in layers of 3/4 and 6/8 metres and the creation of a “limping” rhythm. The beginning of this movement is marked by ostinato motifs which are subsequently broken down as the expressive element takes over. The second movement, Anathema, is characterised by the distinctive handling of its theme: it is heard almost continuously and unchanged in at least one of the voices, making something of an ostinato of the two-bar motif, an effect tempered only by its melodic quality. The constant presence of the theme gives this movement a strong sense of internal coherence. The third and last movement, Leeg (Empty), is a rarefied lento doloroso with three sections. Besides its slow tempo and long notes, the scoring, generally thinned out to three voices, gives the movement an ethereal, hovering quality. This final movement has a tripartite structure, beginning with a fugato entry in the violins and the cello. The fugue is quickly interrupted after the third entry, changing to a soft texture of long, “empty” notes. The middle section begins with a somewhat quicker tempo which soon enough slows back down to tempo primo, followed by an apparent reprise of the fugato entries of the opening, albeit in a slightly varied form. What at first seems a classic reprise dies out after only two entries, transforming into the long, soft notes that close out the work. 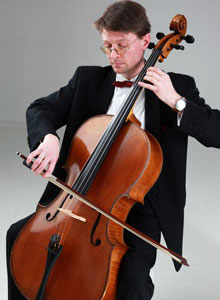