August Baeyens was born on 5 June 1895 in Antwerp, where he died on 17 July 1966. He received his musical training at the Royal Flemish Music Conservatory in Antwerp, studying solfège, viola (first prize, 1916), harmony and counterpoint with August de Boeck and Napoleon Distelmans. As a composer, Baeyens developed chiefly through the study of composers such as Debussy, Wagner and Strauss; this interest gave him the reputation of a revolutionary within the confines of the very traditionalist conservatory. He also came into contact with a broad repertoire through practical music-making, partly as a viola player in “the Royal”, the French-language opera company in Antwerp, and in the Orkest van de Nieuwe Concerten, which fairly regularly programmed contemporary works, sometimes under the direction of leading foreign conductors. Between 1920 and 1927, Baeyens was involved with various initiatives which attempted to breathe new life into the Flemish cultural scene. Important in this connection were the concerts given in Brussels and Antwerp (1921-22), which, although small in scope, premiered music by such composers as Karel Albert, Willem Pelemans, Marcel Poot and Baeyens himself.

In 1927, Baeyens founded the Antwerps Kamermuziekensemble, with which he performed a wide range of music new for the time. The ensemble presented more than forty Belgian premieres of works by composers from the Viennese School (Schönberg, Berg, Wellesz) and from France (Milhaud, Poulenc), as well as such composers as Bartók, Hindemith, Honegger, Stravinsky and several Flemish partners-in-arms (Jef Van Durme, Karel Albert). In 1932, the ensemble died a quiet death because of the limited official and public interest, with the accompanying financial difficulties that this entailed.

From 1932 to 1944, Baeyens was active at the Royal Flemish Opera in Antwerp, working as a secretary responsible, among other things, for the many Dutch libretto translations. After the liberation in 1944, he was appointed director of the opera. He then proceeded to carry out an unconventional programming policy, which led to his dismissal in 1948. In 1953 he was again appointed director, this time playing a less obtrusive role and concentrating more on the administrative aspects of his position. In 1958 he resigned in order to devote himself completely to composition.

Baeyens’ compositions were closely connected to his activities as a concert organiser. The functions that he held in the Antwerp music world demarcated phases in his oeuvre and shed light on the (technical) processes and aesthetic orientation characterising compositions from a particular period.

In the period from 1920 to 1927, Baeyens explored the European musical landscape by applying innovative tendencies in various compositions. In the piano collection Diogenes (1920), Baeyens draws on the sober style of Erik Satie. There are no bar numbers or bar lines notated and the music is constructed from a concatenation of diatonic melodic phrases which differ in terms of articulation, character and dynamics, and which are supported by a (rhythmic) ostinato accompaniment. In harmonic terms, Baeyens (like Satie) does make use of traditional chords, but these are applied in a non-functional manner. Baeyens’ Jazz-Fantasie (1926) is often compared to Paul Hindemith’s Ragtime, the fifth movement of the Suite 1922 op. 26 (1922). Although there are no formal similarities, both aim to legitimate their harmonic audacity (chromaticism and unusual layering of intervals) and their percussive treatment of the piano by making reference to Afro-American music. Besides Satie and Hindemith, the influence of Schönberg (Second String Quartet, 1925), Ravel (Third String Quartet, 1927) and Stravinsky (First Symphony, 1923) is evident.

Baeyens’ “personal style” emerged during his activities in the Antwerps Kamermuziekensemble (1927-1932). The Sinfonia Breve (1928) is clear evidence that Baeyens made use of many ingredients of the New Music, while at the same time approaching them very personally. In terms of melody, the montage principle takes a central place: themes are presented and repeated at a number of different transpositions. Any development is limited to imitation in the entries or contrast through the use of a few chords; there is absolutely no development of motifs. The first two movements are monothematic, the “longer” parts 3 and 4 (respectively, 5′ and 2′) consist of the juxtaposition of two themes, without any confrontation between them. This primacy of melody is a constant in Baeyens’ work. On a harmonic level, this work treads a middle ground between a clear-cut tonality and a consistent polytonality, extended by whole-tone chords and fourth-fifth aggregates that occur independently at climaxes. The liveliness of the work comes mostly from its subtle rhythmic form. Baeyens uses syncopations, irregular rhythmic accents and metrical changes – the latter especially in the second movement, which in this way is reminiscent of the Danse Sacrale from Stravinsky’s Le Sacre. In the instrumentation, the soloistic lines of the winds are prominent, often accompanied by the strings. The percussion is used sparingly. As a whole the Sinfonia Breve may be described as orchestrally-conceived “Spielmusik”, which shuns the idea of “Bekenntnismusik”.

Cantique du Port (1929, on a text by R. Avermaete) is Baeyens’ best known work. The composition calls for an impressive array of forces consisting of a reciter, a four-voice choir and an extended orchestra with an accent on the percussion and winds. The text, which has clear vitalistic characteristics, determines the form of the piece. The composer treats the five senses in terms of the experience of a harbour; this is preceded by an introduction and concluded by a politically coloured finale dealing with a dockworkers’ strike. The work is often seen to be in the same tradition as the volkscantates by Peter Benoit. This is, however, hardly accurate, since the artistic aspirations are very different, the subject much more restrained, and the (Flemish) nationalism completely absent. It is closer to the truth to speak of a dramatic recitation with orchestral accompaniment, an independent sound décor that does not set out to be naturalistic.

The years from 1932 to 1948, Baeyens’ controversial period at the Royal Flemish Opera, are characterised by a major focus on vocal genres, with song taking a place of precedence. Both in terms of text and music, Baeyens’ songs break with the tradition of the Romantic art-song (with piano). Here, as may be expected, the choice of text plays a crucial role. Baeyens draws on texts from Dutch Expressionists (e.g., Drie Van Ostayenliederen – Three Van Ostayen Songs – 1930) and from the New Realism movement (e.g., Een somber drinklied – A Sombre Drinking Song – 1938, on a text by Greshoff and a collection entitled Examentroost). The latter works take aim at the self-satisfied life and artistic notions of the middle class: a bourgeois desire for order and calm, the exaltation of God, poetry and romanticism are all subtly taken to task in both the text and the music. Besides songs, Baeyens also composed several radio plays, such as La Sonate d’Amour (1934) and Coriolanus (1940, later made into a stage version at the Royal Flemish Opera) and an opera, De Ring van Gyges (1943).

When Baeyens’ artistic obligations at the opera came to an end in 1948, he concentrated more on composing, without taking on any other organisational activities. In the succeeding years he produced five symphonies (the 3rd to the 8th), concertos for viola and trumpet, a wind quintet, a violin sonata and his last three string quartets (the 4th to the 6th). Baeyens clearly saw himself as an established composer of the time-honoured classical genres and large-scale symphonic works. The classical patterns are, however, filled in freely, even as the melodic form continues to take a central place. In this last period, Baeyens also composed several pseudo-dodecaphonic works, in which he applied an atonal musical language for the first time. This approach was, however, to remain an exception in the composer’s oeuvre.

More information about the life and works of August Baeyens at svm.be
Scores and cd’s by August Baeyens, available in the KU Leuven music catalogue 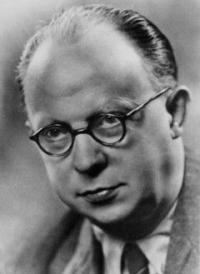