Hans Aerts was born on 28 September 1958 in Balen. He studied clarinet and piano at the Music Academy in Mol. After earning ‘governmental medals’ (regeringsmedailles) for both instruments, he continued his studies at the Royal Conservatory in Antwerp, where he took lessons with Walter Boeykens (clarinet), Marc Verhaegen (harmony) and August Verbesselt (analysis). He continued his studies at the Royal Conservatory in Brussels, taking counterpoint and fugue with Rafaël D’Haene. He rounded off his studies with Piet Swerts (composition) at the Lemmens Institute in Leuven. Since his graduation, a number of his works have received prizes. In 1984 he was given an honourable mention at the Clarinet Choir Composition Contest of the University of Maryland. In 1993, 1995 and 2005 he was a prizewinner in the Cantabile Composition Competition for the three piano works Berceuse triste – Canzonetta (1993), Rondino (1995) and Promenade (2005). In 1999 his song Tranen (Tears), on a text by Guido Gezelle, for soprano, clarinet in b-flat and piano (1998) was selected in a competition organised by the city of Roeselare. Hans Aerts composed At the lake of Connemara for harp (1995) and Contemplazione for violin and piano (1996) as the compulsory works for, respectively, the 1996 and 1997 editions of the Axion Classics National Competition for Music and Spoken Arts, organised by Dexia bank. Composing for the same competition, in 2004 he wrote Concertino da camera for woodwinds (flute, clarinet, oboe, alto saxophone and bassoon) and piano. The piano work Sentimental Waltz was nominated in the ISME Composition Competition in 2003 and released on CD. At present, Hans Aerts is active as a composer and a teacher of clarinet and chamber music at the Municipal Academy for Music, Word and Dance in Turnhout.

Hans Aerts’s oeuvre can by and large be characterised as a continuation of the late-Romantic style. His music is almost always tonal, although he does push the limits of this tonality. The generally clear traditional forms (often sonata and ABA form) are often somewhat blurred by transpositions and inserted passages. His compositions are never based on an abstract, mathematical element, but always on a particular musical idea that is then developed. His compositional style has been influenced by such composers as Francis Poulenc, Maurice Ravel, Samuel Barber and Aaron Copland. The total oeuvre of Hans Aerts can be divided into three different stylistic periods. His first works, written up to the beginning of the 1990s, are very accessible. They have an unambiguous, traditional form with simple structures and a clear tonal progression without many modulations. A second period begins in the course of the 1990s. Hans Aerts sought out his own harmonic language in order to achieve maximum expression. This is a period in which, among other things, he experimented with cluster chords and modality. Contemplazione for violin and piano (1996), with its many metre changes and unpredictable rhythms, is typical of this period. Indications such as calmando, lento e lugubre, animando and affrettando succeed one another in quick succession, and the tempo constantly changes. The harmonic language is strongly chromatic and interwoven with chords based on fourths, sevenths and ninths, giving each chord a heavy-laden sound. This is fairly sombre, very expressive music. A third period began in 2000, a year that represents a turning point in the compositional practice of Hans Aerts, when he abandoned what he had come to feel was an overburdened and far-fetched music, in order to come into closer contact with the listener. His music once again became more accessible, livelier and rhythmically more uniform. And yet the music of this period is not comparable with that of the first period. It is rather a synthesis of the first and second periods: the relatively simple musical language of the first period is combined with the powerful expression and the rich harmonies of the second. A good example from this period is the Concertino da camera for woodwinds and piano (2004). It consists of the classic three movements: a quick movement (Allegro man non troppo, nobilmente, in sonata form), followed by a slow movement (Largo e molto espressivo, with ABA form) and concluding with another quick movement (Allegramente, with ABA form). After the formulation of the main theme in the first movement, this theme is immediately developed and shortened through all manner of chromatic techniques. There is no real tonal stability, and cohesion is achieved mainly through the repetition and transformation of the main theme, which is constantly altered through the application of a wide range of techniques. A number of passages in this work are modally conceived, an aspect with which the composer had experimented extensively in his second period. For instance, the second theme in the first movement is modal and is accompanied by a harmony with many fourth-chords, in order to avoid any obvious triads. In the development, the main theme becomes almost unrecognisable because of the relatively virtuoso writing style. This style is exceptional in the oeuvre of Hans Aerts, but can be explained here by the fact that this work was written for a competition in which the compulsory work had to be technically demanding for the performer. The chords create a French mood, with many tension-filled sevenths, ninths, raised fifths and modal chords that never resolve into a simple triad, but rather into chords extended by sevenths and ninths. The fourth chords create the open atmosphere characteristic of the music of Hans Aerts. 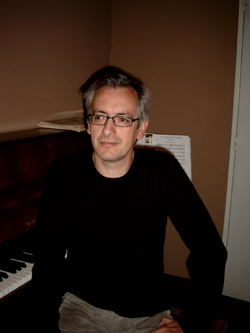