Paul Adriaenssens was born in 1952 in Antwerp. He did not receive any specific musical training, developing his skills mostly on his own. His preference in this study was mainly the exploration and development of physical sounds. In 1975, he came into contact with the SEM (Studio for Experimental Music), where he also did his military service. Together with Joris De Laet, and later also with Dirk Veulemans, he used this base of operations to organise regular concerts, lectures and workshops with the aim of introducing audiences to electronic music. In the SEM, Adriaenssens not only made the acquaintance of the two above-mentioned composers but also of such figures as Karel Goeyvaerts, René Stordeur and Serge Verstockt. Originally, Adriaenssens mainly produced works commissioned by Flemish organisations (including the City of Antwerp and the Maesereel Foundation). Negative experiences with the Flemish cultural administration, however, led him to broaden his horizons in the 1990s, choosing increasingly to work in the context of projects outside Belgium.

Paul Adriaenssens’ oeuvre is clearly predominated by a quest for balance between the use of improvisation and abstract mathematical models. Improvisation guarantees artistic freedom, breaking through the rectilinear nature of abstract models. The problem with improvisation is, however, that as a compositional technique it seldom leads to innovation. The simple fact is that it is difficult to draw from the human brain something that was not already there. Abstract models ensure innovation, a key element for Adriaenssen. A mathematical concept thus often forms the basis of these compositions, with the outer trappings filled in at the musicians’ discretion. This predilection for mathematical models expresses itself not only in the structure, but also in the sound of his compositions. These are characterised by slowly evolving processes, where the attention is mainly focused on the evolution of the timbre.

Although the composer’s preference for mathematical models has played a role throughout his compositional process, these abstract structures are most clearly expressed in his early works. An example of this is 3-4-5-lots of good times (1976), for 4 strings or woodwinds and 4 percussion instruments. The 3-4-5 refers to the Pythagorean proportions between the sides of a right-angled triangle; these proportions influence the form, the rhythm and the pitch relations within this work. This principle is perhaps even clearer in A Short Walk with Karl F. (1979), in which a Gauss curve forms the basis of the whole composition. Strange Attractors (1983) for computer and tape is also completely dominated by a mathematical element. The sounds produced by the computer are the result of a basic formula entered by the composer. The computer consistently applies the same formula to the previous result, creating an increasingly more undefined and unpredictable sound world. In more recent work, as well, Adriaenssens has based his compositions on scientific concepts. In 4 x 4 (1995), he incorporates principles from catastrophe theory. More recent is Générations (2003), in which he creates themes based on the exchange of genetic material over several generations; he accomplishes this through the exchange of sounds between 3 different blocks, each with its own specific timbre and location in a space. With Sleep Tight, Sweet Reptile (1997), he makes his clearest statement against an over-emotional approach to music. The part of the brain that is responsible for our emotions is, in biological terms, older than those parts which allow us to think logically. This oldest part of the brain, however, shows striking similarities with the reptile brain. The title of this work is thus intended to suggest that an emotional approach to art often impedes an intellectual approach.

Although Paul Adriaenssens composed for acoustic instruments early in his career (3-4-5-lots of good times), he soon made use of electronic means in his compositional process. In the period between 1976 and 1985 he composed mostly for electronic instruments, combined with acoustic. The Breton bombarde, an instrument characterised by a rich spectrum of overtones, is heard in Dinaou (Breton for “slopes”, 1982). The part played by this wind instrument, full of glissandi and microtones, is accompanied by an electronically generated sound-mass, the middle register of which has been filtered out. Levels (1984) is based on a Flemish poem. Adriaenssens deconstructs the semantics of this poem in 3 different ways, organising the words in 3 different manners. These 3 orders are placed one above the other together with electronic accompaniment, all of which is accompanied by an acoustic instrument with a score generated by the text. Because of the great degree of difficulty, the original instrumental part was replaced in subsequent versions by different groups of instruments. To date, only the version for voice and the version for five wind instruments have been performed. The difficulty of realising the combination of live electronics and acoustic instruments led Paul Adriaenssens, starting in 1985, to create his finished products on tape. Because of this decision to work with finished products rather than live electronics, audiences increasingly protested that listening to tape recordings left something to be desired as an experience. As a result, the composer, and with him the whole SEM crew, decided to accompany their electronic compositions with video images, starting in 1989. In contrast to Joris De Laet, Paul Adriaenssens did not use images from television in the compilation of these videos but went out and shot his own material. Under the influence of this extension into other art forms (In Cirkels, Whatever Comes Next, Camera Obscura), these compositions began to take on a more pronounced socio-critical attitude. In Cirkels, composed in connection with Metro ’89, is an indictment of the fact that through a shortage of funds, part of the Antwerp metro tunnels was never provided with track. The visual material from this composition depicts a tram line going around in progressively smaller concentric circles. As the visual material of each new circuit decreases, the musical structure gets thicker, such that at a particular image the same sounds are heard. The same sort of image-sound relation is found in Whatever Comes Next (1992). For Paul Adiaenssens, then, the parameter of image takes shape in function of the other parameters of sound. Tunnel Vision no. 1 (1991) is good example of this. In this video, the visual material shows the passage of a car through a long tunnel. The visual material is repeated several times, but with each passage, the images become more distorted. The sound track goes through the same process. The sounds heard during the first passage resemble the sounds made by cars as they accelerate in a tunnel. In the succeeding sections, the same audio material is used, which, like the visual material, is increasingly distorted with every passage. 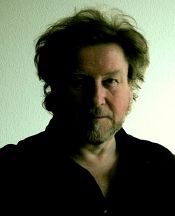